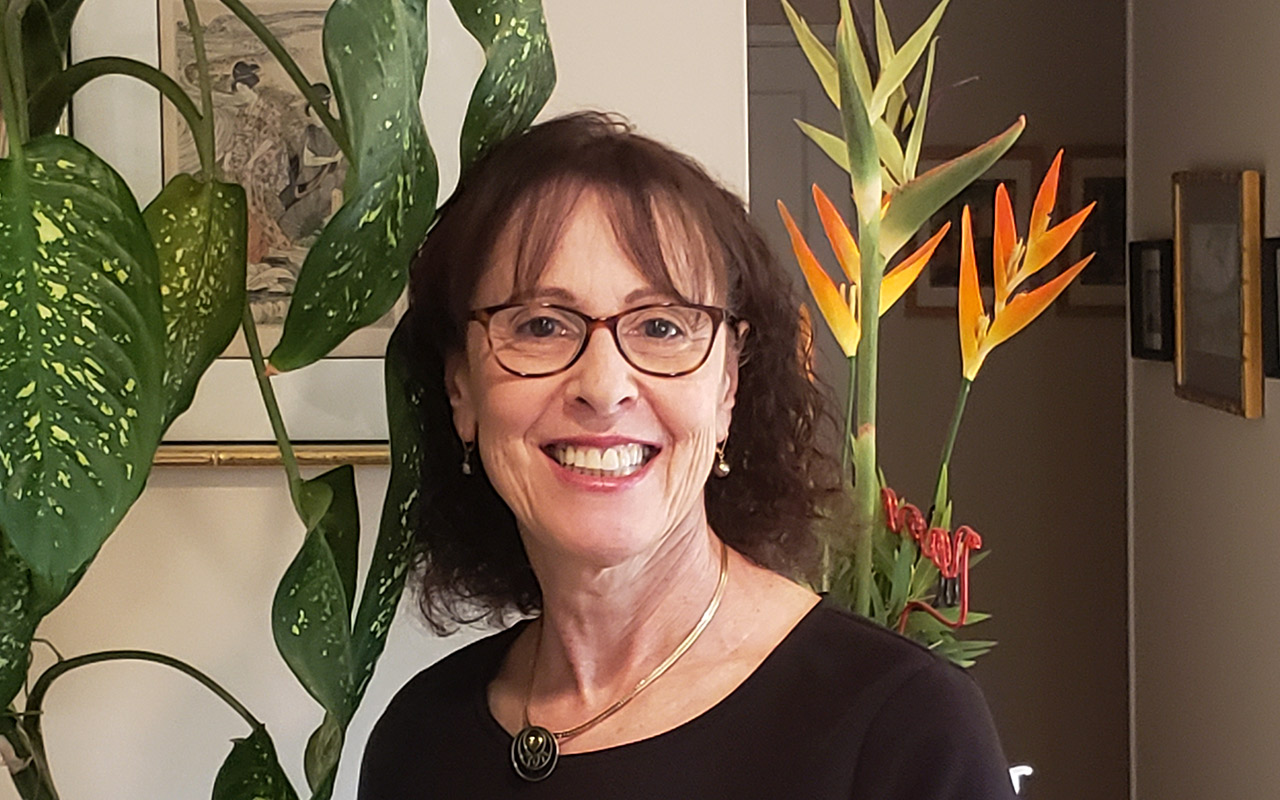 ‘My mastectomy was on April Fools’ Day, and I think I fooled everybody because had I not had the surgery, I probably wouldn’t be here today.’

“In 1991, I was 34, married with two children, ages 9 and 6, when on a routine checkup with my primary care doctor, she found a lump in my breast. Nobody in my family had a history of breast cancer. I had none of the risk factors. My husband, my strongest support—we’re married 42 years—supported me through everything. The doctors didn’t want to do a mastectomy. Thankfully, we didn’t listen.

“My husband advocated for me because 30 years ago, women didn’t have as much of a voice as we do now. They agreed to do a mastectomy and additional cancer was found in my breast. My mastectomy was on April Fools’ Day, and I think I fooled everybody because had I not had the surgery, I probably wouldn’t be here today. My journey started during the chemo sessions. I would sit there alone, petrified and nauseous. My oncologist recommended I meet with the oncology social worker; that opened my eyes. He was an emotional support; he validated my feelings. He also told me about the Adelphi Breast Cancer program. I made a phone call to them that changed my life; I joined their support group. They were caring, supportive, nurturing women. After I wanted to give back, so I volunteered at the Adelphi Breast Cancer Hotline.

If I had not advocated for myself, I wouldn’t be here.

“I decided the journey I needed to take was to become a social worker. In 2009, I became a licensed social worker. I am now a medical social worker for Northwell Health Hospice Care Network. I see patients at the end of their life. My role is to offer them emotional support and educate them about hospice and end of life. A big part of it is advanced directives, specifically health care proxy. Many people come to us without it, and that causes a lot of family struggles.

“I think without a diagnosis of breast cancer 30 years ago, I wouldn’t be where I am today. About five years ago, I had another mastectomy, which required no further treatment. As a hospice social worker, I’m very mindful to make sure my patients get the best care they’re entitled to. I’m a big advocate for all their needs. If I had not advocated for myself, I wouldn’t be here. Women diagnosed with breast cancer should do their homework and reach out for support. There’s a lot of support available.” 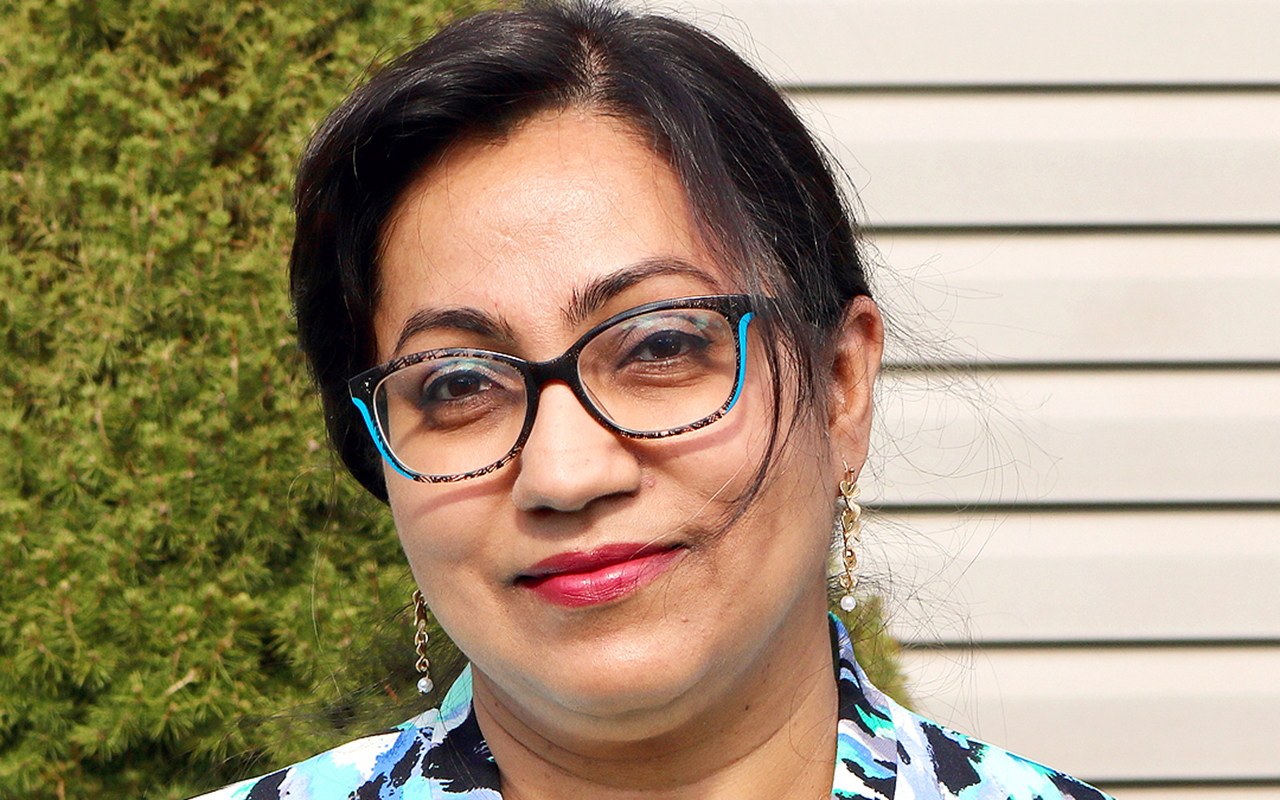 ‘Art is itself a language. I want to eventually combine the neuroscience and art into art therapy.’

“I grew up in India and I had a knack for biological sciences, I completed my master’s in Zoology, and I was ready to venture ahead. My dream was to come to America and do research work and pursue a PhD. I came here all by myself and studied neuroscience at Louisiana State University. But since childhood I loved drawing, sketching and painting.

“I met and married my husband, finished my PhD, and started my post doctorate fellowship at Mount Sinai. I was working there when I had my baby. I struggled between being a mom and being a scientist. I realized I’m not happy, I can’t give enough time to my kid nor to my research. In neuroscience I learned that the first few years in a child’s life is very important, so I had to step back and focus on him and get him on the proper footing.

“Being with my son full-time at home, I started drawing and painting again. It grew more and I learned more techniques that I saw online, and more avenues opened up. India is my foundation; my parents are still there, and I visit India but America helped me blossom. Now I do different types of painting, airbrush, marble painting, fluid art painting and more.

I don’t even speak the language, but I felt this art gives me a lot of self-esteem, a lot of confidence and at the same time it’s very therapeutic, your brain is always thinking of something.

“I found that I can do some optical illusions in sketching. I was interested because I studied in neuroscience how our eyes get adjusted to optical illusions. I was editorial coordinator of my child’s school magazine, “Pen and Ink,” and now I’m involved in Maharashtra Mandal, New York, people from India joining together. They use my paintings on their magazine cover page. I don’t even speak the language, but I felt this art gives me a lot of self-esteem, a lot of confidence and at the same time it’s very therapeutic, your brain is always thinking of something.

“Art is itself a language. I want to eventually combine the neuroscience and art into art therapy. Art can make me very happy. I think about how to bring people together and create things with them, especially with kids with ADHD and adults who are depressed, how this art can help improve their brain activity, their calmness.” 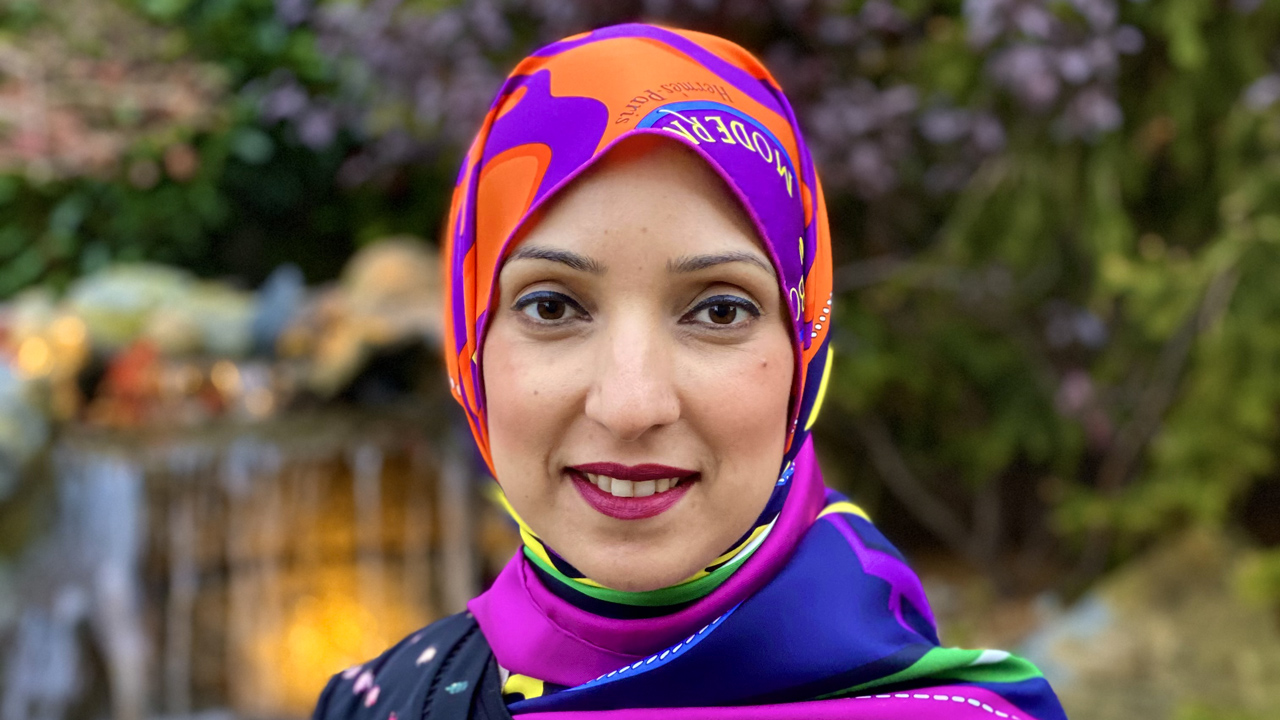 ‘From the second that I put it on, I instantly felt this relief and this sort of weight lifted off my shoulders.’

“I call it my ‘hijab story.’ I am a visibly Muslim American woman because I wear the hijab, which is a scarf that I wear on my head as part of my wardrobe. It’s a way of dressing modestly, which is something that Muslim women do, traditionally.

“I didn’t wear a hijab when I was in high school, but people that came into my life later, in my adult years, just assumed that this was part of my life always. Growing up, I had a very normal childhood — great time in school, great friends, went to college.

“I was about to start medical school and there were certain things going on in my personal life. I just felt like there were obstacles and I was at a point where I was feeling down. I like to be very positive and always have the glass half-full approach to everything that I do. So that little bit of sadness that just kind of stayed with me, no matter what I did, was really bothering me and I needed to get in touch with my spirituality.

I used to always hear the saying that if you take one step towards God, he’ll take a hundred steps towards you.

“I needed to do something that would help me feel more at ease. I used to always hear the saying that if you take one step towards God, he’ll take a hundred steps towards you. And I just said, you know, maybe this is what I need to do right now for me. And so, I decided that I was going to wear the hijab.

“It was a big decision because I knew the responsibility that came with that — everybody was going to look at me as sort of a symbol of this religion. So that meant that even though I’m not claiming to be the most pious person, I didn’t want any of my actions or anything that I did to tarnish or give a bad representation of my religion. It was a big commitment and I certainly wanted to do it when I was ready for it. I didn’t want to start wearing it and then take it off because then it gives people mixed signals and confuses everybody. I took all of these things in my mind and said, ‘You know, I think I’m ready for this,’ and decided to start wearing the hijab.

“And from the second that I put it on, I instantly felt this relief and this sort of weight lifted off my shoulders. That feeling of sadness and overwhelming feeling of anxiety, or whatever I was dealing with at that time, literally just vanished with like a snap of a finger. And I never looked back since then.”