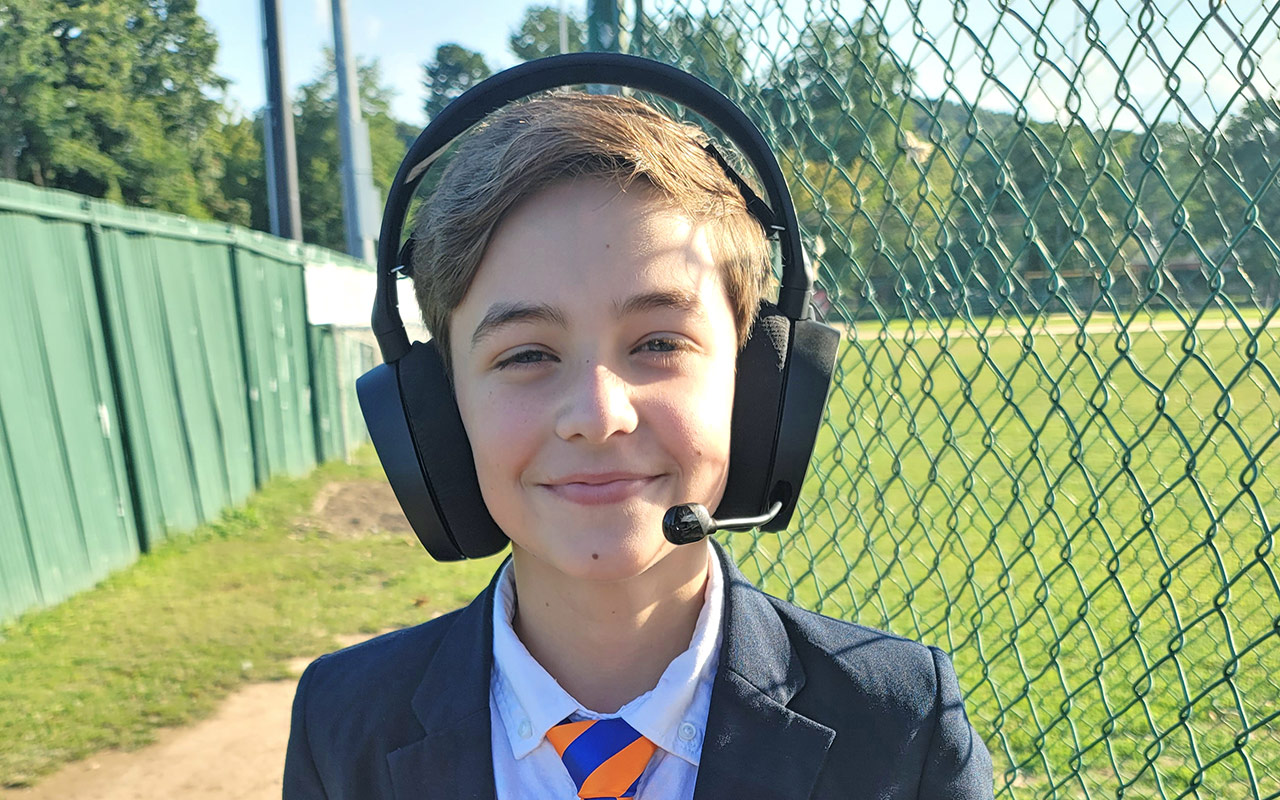 ‘When I’m on the mic, it’s just me being myself. I just talk and go with the flow.’

“It started when I was 3, 4 years old. I used to go around my house interviewing my family, just asking random questions. But when I was 5, I went to the Long Island Children’s Museum. It has a little News 12 booth [a play studio with a green screen] that used to show Islanders and Knicks clips. I would just commentate over them, and that’s really what inspired me to do play-by-play. I was also inspired by the Islanders broadcasting team of Butch Goring and Howie Rose, then Brendan Burke, and I also grew up hearing Gary [Cohen], Keith [Hernandez] and Ron [Darling] calling Mets [TV] games. They all inspired me, and when I heard that people get paid to commentate sports, that was just awesome to hear I could one day get to do that as a job. 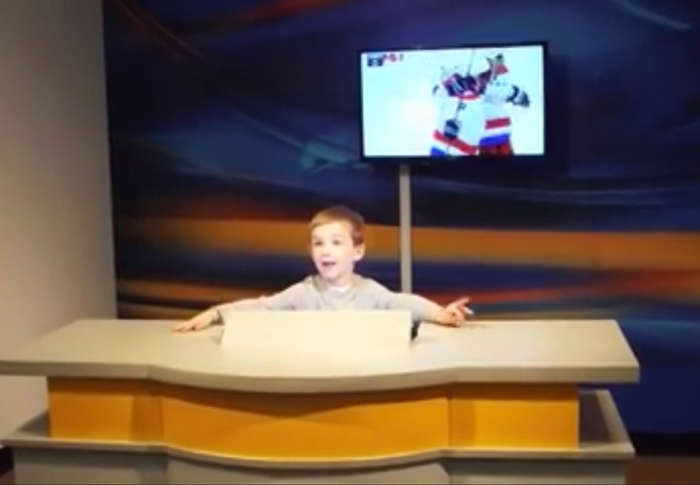 Bottom of the ninth, calling a walk-off home run, that would be awesome. And I’m going to try and reach that goal.

“Almost every night at home, I turn on clips of home runs, no-hitters, overtime goals, Stanley Cup finals, and I commentate over them. I also started going to [broadcast journalism] camp at Hofstra and started doing other sports, including live games. And even though I didn’t go live on the air with them, I got to go in the booth with Butch and Brendan. That meant so much because I grew up rooting for the Mets and Islanders. 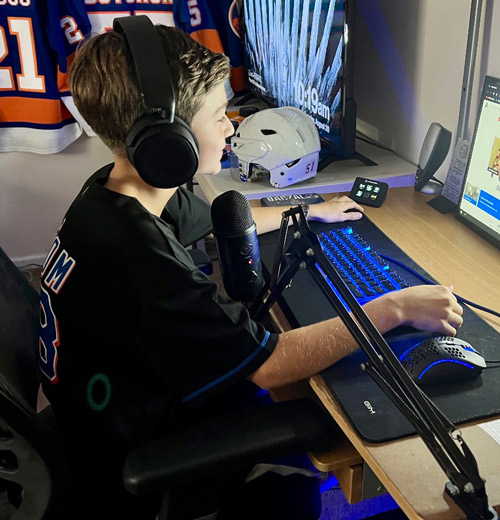 “In August, I got to go on [the live broadcast] with Gary, Keith and Ron [after winning the 2022 SNY Kidcaster Contest] during a Mets-Rockies game, and when it came to kids in school, everybody watched. I even got Yankees fans to watch. I have friends who were in Cooperstown [New York] for a baseball tournament at the time, and they watched it there in a restaurant. They told people there, ‘Oh, we know him!’ 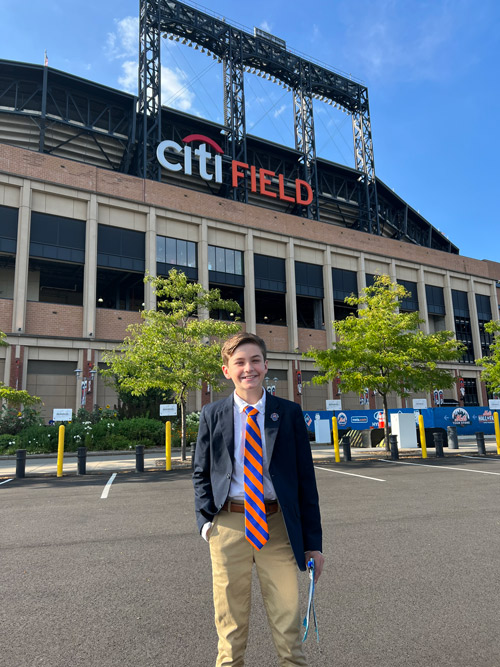 “I’m in seventh grade now, and currently doing the morning announcements for my school. The high school has great broadcasting classes, and I’m looking forward to that. You have to admit, school can be boring sometimes, but these things make it exciting for me to go every day. When I’m on the mic, it’s just me being myself. I just talk and go with the flow. I have also played baseball, but would I rather be at bat with the bases loaded or calling a game with the bases loaded? I think that’s a no-brainer. Bottom of the ninth, calling a walk-off home run, that would be awesome. And I’m going to try and reach that goal.” 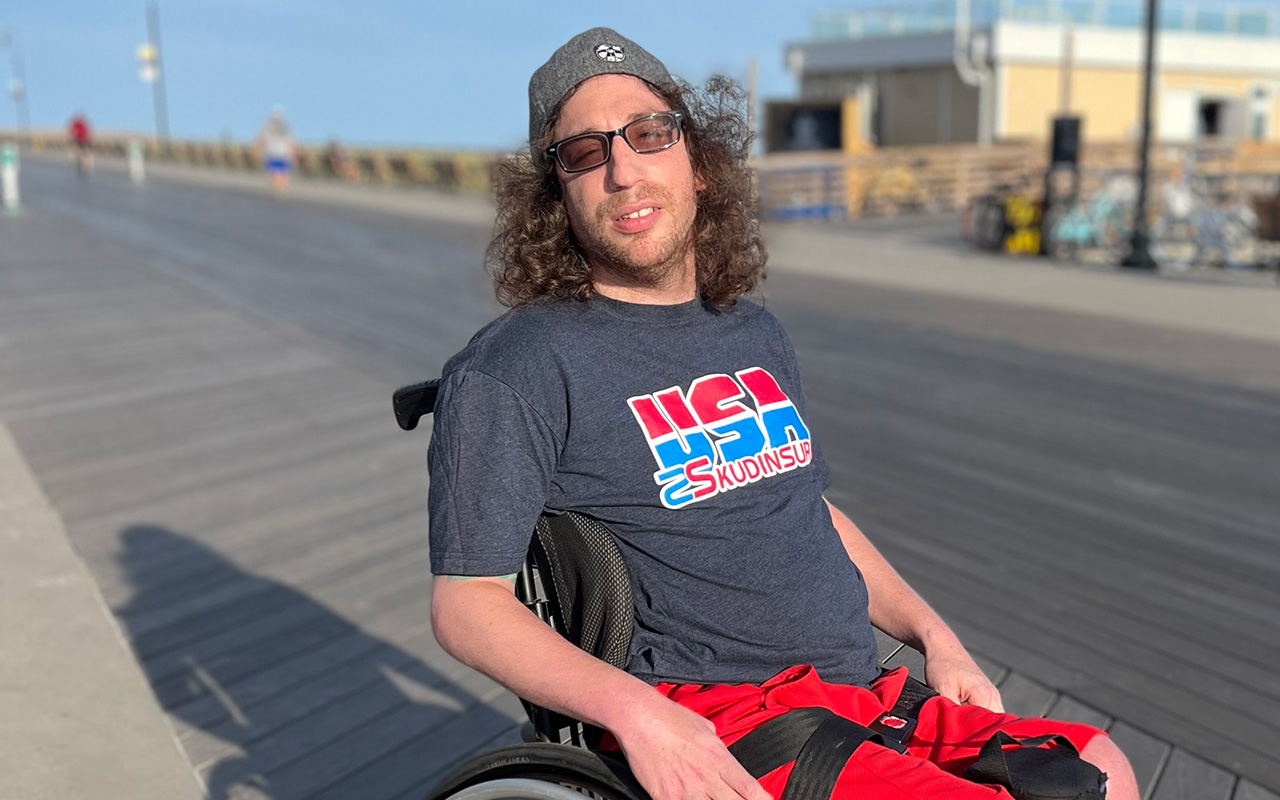 ‘It was almost like an out-of-body experience because you’re on the exact same playing field as everybody else. You’re just at the mercy of the ocean.’

“I’ve always been more comfortable in the water than anywhere else. It was something I was always interested in. We just didn’t know how to go about it because I have cerebral palsy. Then, just looking through things on the internet, I actually have a friend who is older than me that had a spinal cord injury his senior year of high school, and his parents used to run a nonprofit called Wheels to Water, so we knew about adaptive surfing through that. That’s how I met Cliff and Will [Skudin]. They were on Jet Skis helping everybody get out in the water, and it kind of took off from there. 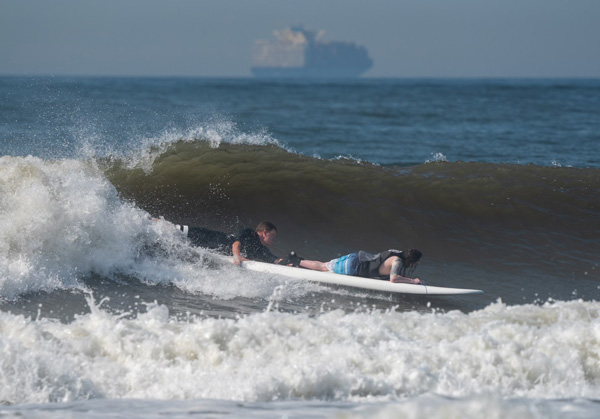 “[I have] more body control [in the water], not fighting against anything, when [in] other circumstances I really have to think about what I want my body to do. The water is the equalizer where you don’t have to put that same effort and thought into it.

“In my case, I have a bunch of guys that help me get out. I have a beach wheelchair that we hook to an ATV that the guys use to get things up and down the beach to get me onto the beach. And then someone will carry me down to the water, pop myself near my board. Someone else will carry it out. It’s a whole team effort to just make it out there. Then once I’m in the water, someone will help me paddle into the wave, and other guys will be on the inside to catch me on the way in.

“[My first time surfing] I know for myself I’ll never forget it. You know people say things are life changing. For me it was. It was almost like an out-of-body experience because you’re on the exact same playing field as everybody else. You’re just at the mercy of the ocean. There’s a certain adrenaline rush that you don’t get from anything else. It was always something that I chased because, obviously, I’m not going to dunk a basketball, I’m not going to do anything like that. So this was the perfect blend of me being comfortable in the water with the added adrenaline junkie stuff.”

There’s plenty of people who don’t know me, and I’ll say like, “I go surf,” and they’ll do a double take.

“The majority of people down here actually have no idea what my real name is. Everybody kind of knows of the ‘Surfing Samurai’ as almost like a cartoon character sort of. It came about because when I’m in the water, my hair is pulled back in what would resemble a samurai bun. But I don’t really have any fear in the water, so I’m sure of the combination of the two things. I like being out in bigger conditions, which not a lot of people in my situation are doing.

“[I hope my story can help by] spreading awareness of what’s out there for people, whether it be someone who knows someone with a disability, or someone themselves just going out and chasing after something that they like to do, no matter what people think trying to accomplish it. 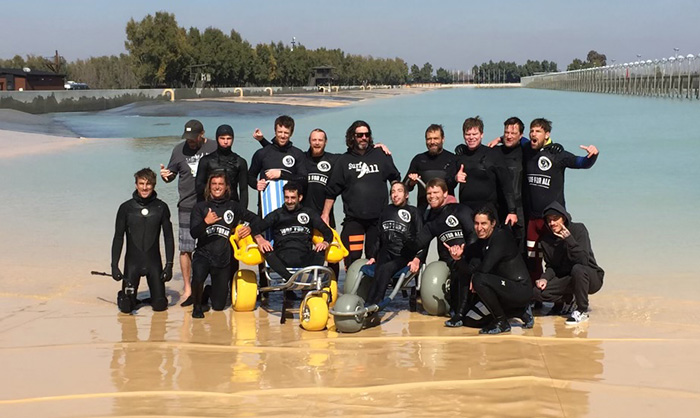 “There’s plenty of people who don’t know me, and I’ll say like, ‘I go surf,’ and they’ll do a double take. You have to show them photos and videos, and [they’ll] be like, all right, this is something you can do that society wouldn’t necessarily think I was able to.

“More than anything, I don’t think without the Skudins — I’m not from Long Beach — I don’t think this community would have embraced me as one of their own without the support of them to be a part of Surf For All and the stuff with Skudin Surf, to be able to share my experiences and things with other people and get kids and adults in the water that you wouldn’t think it was an avenue for them. [I like] to see the faces after that first wave, the expressions of parents, like my own parents and my brother. I understand it from both sides of the coin. So, it’s cool to be a part of those memories. You never know where that’s going to take someone else. 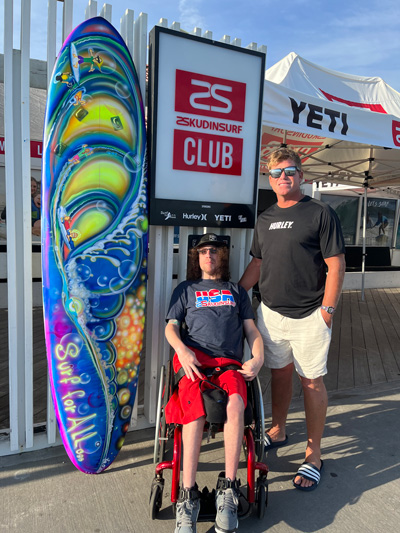 “People on the beach now will see me being dragged down to the water and they’ll be like, ‘Wait a second, what are you guys doing?’ And they’ll have to watch me come out of the water, have someone put me back in my chair. And they’ll be like, ‘Oh, all right, this wasn’t a rescue, and he’s fine.’ But people still don’t grasp it until you really see it for yourself. And they’re like, ‘All right, this is pretty nuts.’”