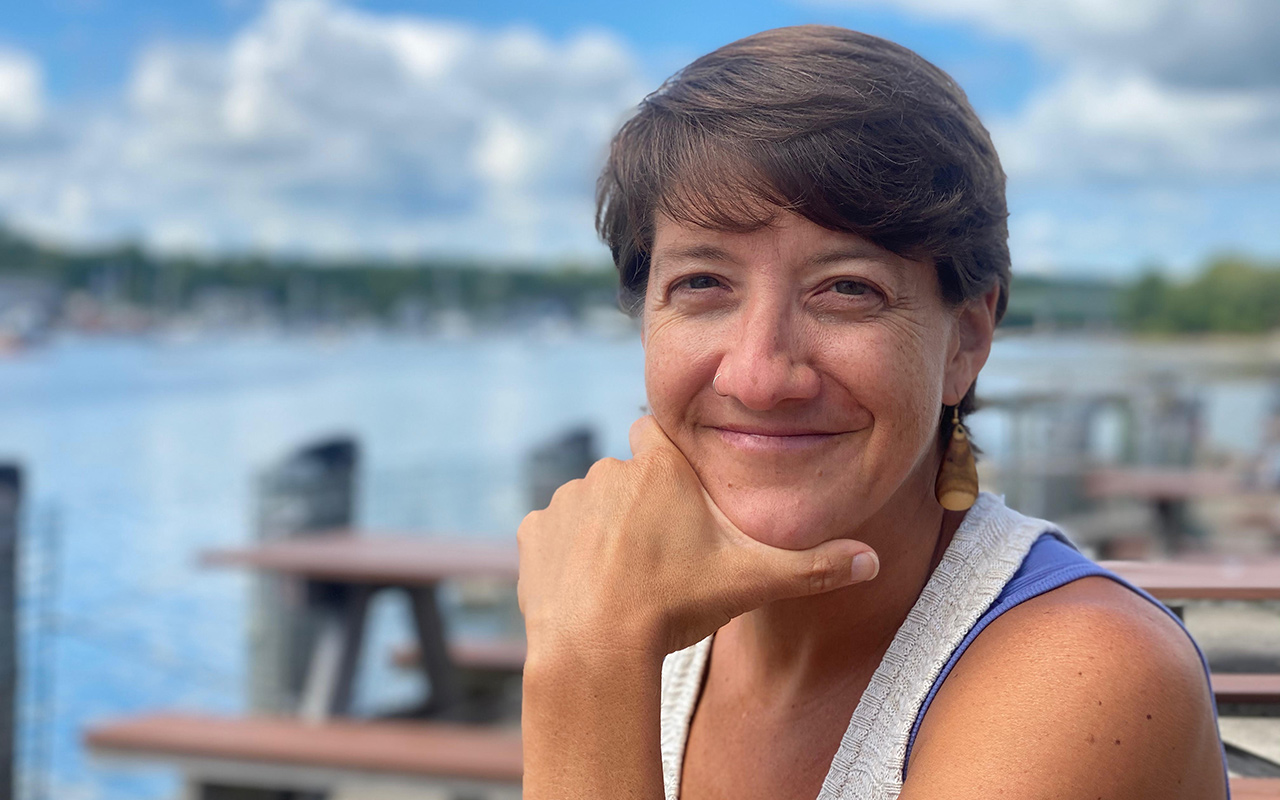 ‘We wanted to provide a group that supported one another and shared birth stories and learn from other people’s experiences.’

“I’m a licensed massage therapist and was treating a client who just had twins via Cesarean who was having back pain. I was totally shocked by the fact that the only real follow-up for this birth was that she would see her doctor once and she was sent home with babies to lift.

“I learned there’s no postpartum care on the East End. I decided to become a doula to provide emotional and physical support for a birthing person throughout their whole pregnancy and labor process.

“I connected with another doula, and we realized that not just the postpartum was lacking, but support for pregnant women too. We wanted to provide a group that supported one another and shared birth stories and learn from other people’s experiences. That’s how our group birth circle started in 2012.

During the pandemic we created the Stork Co-op, a baby and parent pantry with new and gently used donated supplies.

“Over time, we learned the inequities of birthing and that the maternal mortality rates on the East End are very poor. That launched us into our advocacy efforts. We do a lot of advocacy in terms of maternal mortality and awareness and education, especially for the Shinnecock and the historic Black community here.

“Out here, you need a car to go everywhere, so getting to and from doctors appointments can be hard, and the two birthing hospitals are an hour away [ in Stony Brook and Bay Shore]. For people who are low risk, we’re educating them about midwifery and doula services and offering them support during pregnancy and birth. 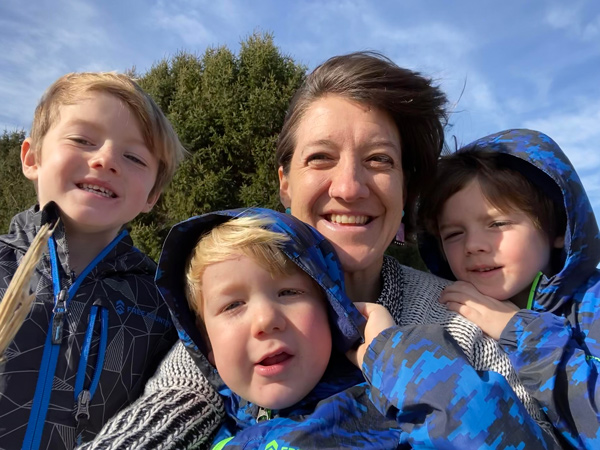 “Having a community when you’re going through this life-changing experience is important. We incorporate supporting the mom as much as the baby.

“During the pandemic we created the Stork Co-op, a baby and parent pantry with new and gently used donated supplies; everything from baby bottles to infant care to maternity care to postpartum.

“We distribute them to our local year-round community we know is confronted by these access issues. We’ve also done educational presentations with local practitioners. We’ve helped hundreds of women. I didn’t think I would be doing this, but I felt like I needed to because nobody else was.

“In the past five years, there’s a national recognition of the maternal mortality rates. There are now groups and organizations across Long Island that are focusing on these topics and trying to improve the situation.” 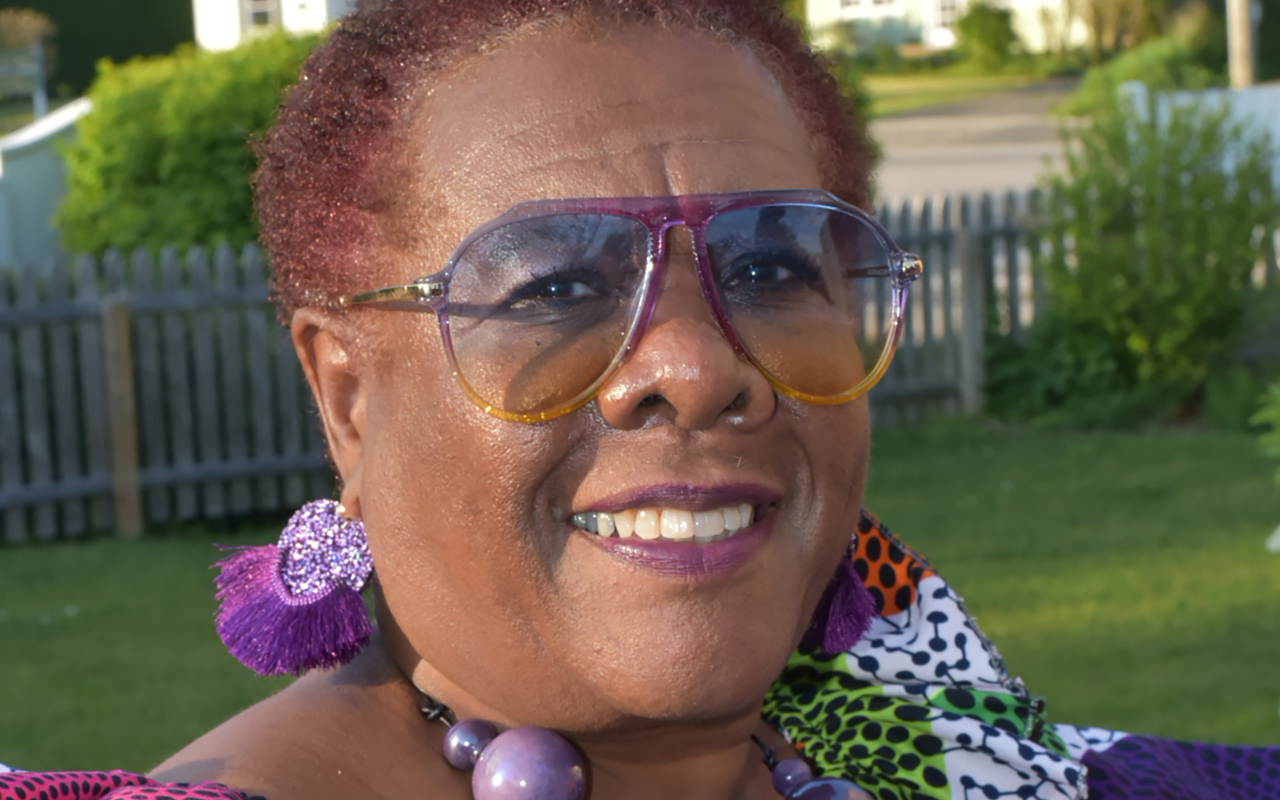 ‘I decided not to let those scary, unfortunate realities define me, but to use them as tools for triumph.’

“I was born and raised in the Village of Southampton. My parents came here in the late ’40s from North Carolina and Virginia as part of the great migration of Black people from the South who came here to work on the potato farms.

“My mother worked in the Bulova watch factory in Sag Harbor and my father worked on farms, owned a landscaping business and then owned a restaurant where the Lovin’ Spoonful got their start.

“I remember being about 7 years old in 1962, watching cartoons and eating my cereal and looking up and no longer seeing the cartoon but instead seeing attack dogs held by policemen and other policemen with hoses making people who looked like me fly through the air with the force of that water.

“I was so confused because a police officer had just come to our second-grade class to talk about how they were there to serve and protect us. I remember the fear that gripped me. I also remember my mother telling us we could not go down Jobs Lane. I couldn’t understand that. 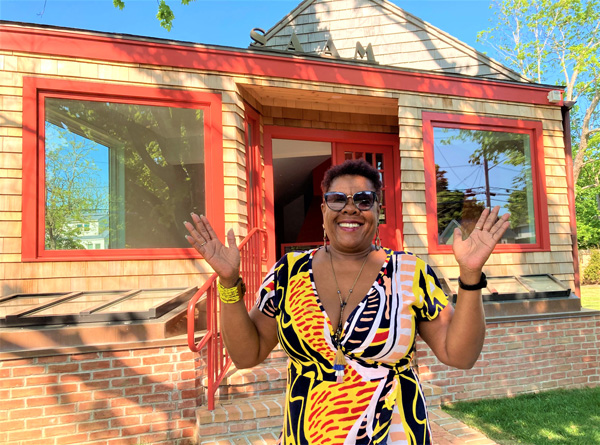 “When I was in high school, I drove with a group of teenagers down that lane; we were determined to. I saw the mannequins in the store windows and couldn’t figure out what the big deal was. But when we got to a light, a white guy asked us what we ‘N-word’ were doing there.

“That’s when I realized that my mother hadn’t wanted me to experience that. But I decided not to let those scary, unfortunate realities define me, but to use them as tools for triumph. I think that was the beginning of my advocacy for injustice throughout my career.

“Years later when I was assistant to the village mayor of Southampton, I started my 16-year advocacy to convert the old local barbershop into a museum.

“When I was growing up, the barbershop was on one side and the beauty parlor on the other in the same building. In 2010, a letter came across the mayor’s desk to tear the building down because it was ‘an eyesore’ at the entrance of the village.

“I told the mayor I’ll be the crazy woman in front of the bulldozer, and this is not going to happen. It was the start of my journey to be the founder and executive director of the Southampton African American Museum.”

What I learned as a child is, when you see injustice, you have the power to change and make a difference.

“My auntie was the beautician in that beauty parlor, and when I was about 11, I would answer the phones and write down appointments for her. One of my best memories was being asked by her to do coffee runs down the road and using the change to buy sweets.

“The beauty and barber shops were not just a place you get your hair done. They were a gathering place for our community, like a community living room for us.

“They were a safe haven, a place that we felt at home, a place we felt like family. My auntie taught a lot of us young women how to be a lady. She talked about the importance of us carrying ourselves a certain way and gave us etiquette lessons.

“The barbershop next door was where the owner emphasized the importance of education and voting, and he trained young men to be barbers, two of whom are still in the area today. So it was important for our community. I didn’t want to see it torn down. Eventually, the building was purchased by the town Community Preservation Fund on village property. 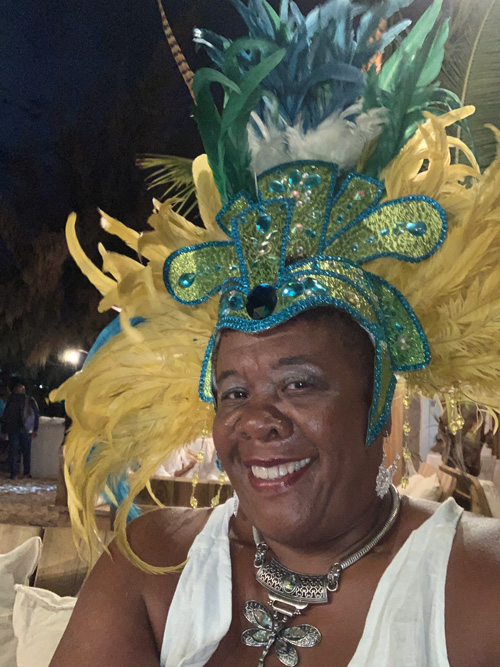 “Originally, we called it the African American Museum of the East End with the 501(c)(3) [organization] we established. I started curating exhibitions and film festivals, spoken word and live jazz to get the word out.

“We had a grand opening on Juneteenth in 2021. The thing that kept me going was knowing that it was important to leave a legacy here for our community.

“We contributed a lot in this community, and even now my community is all being gentrified. With the latest census, the Black demographics are very low to none at this point. So, if nothing else, we will not be erased.

“At the museum, people learn about the history that they’re not taught in school. So many people are shocked that there is even a Black museum or there were even Black people in Southampton’s history.

“For me, this work is not about the applause; it’s about the cause. Because when I look back, this has been in my DNA to be an advocate for a long time. What I learned as a child is, when you see injustice, you have the power to change and make a difference.” 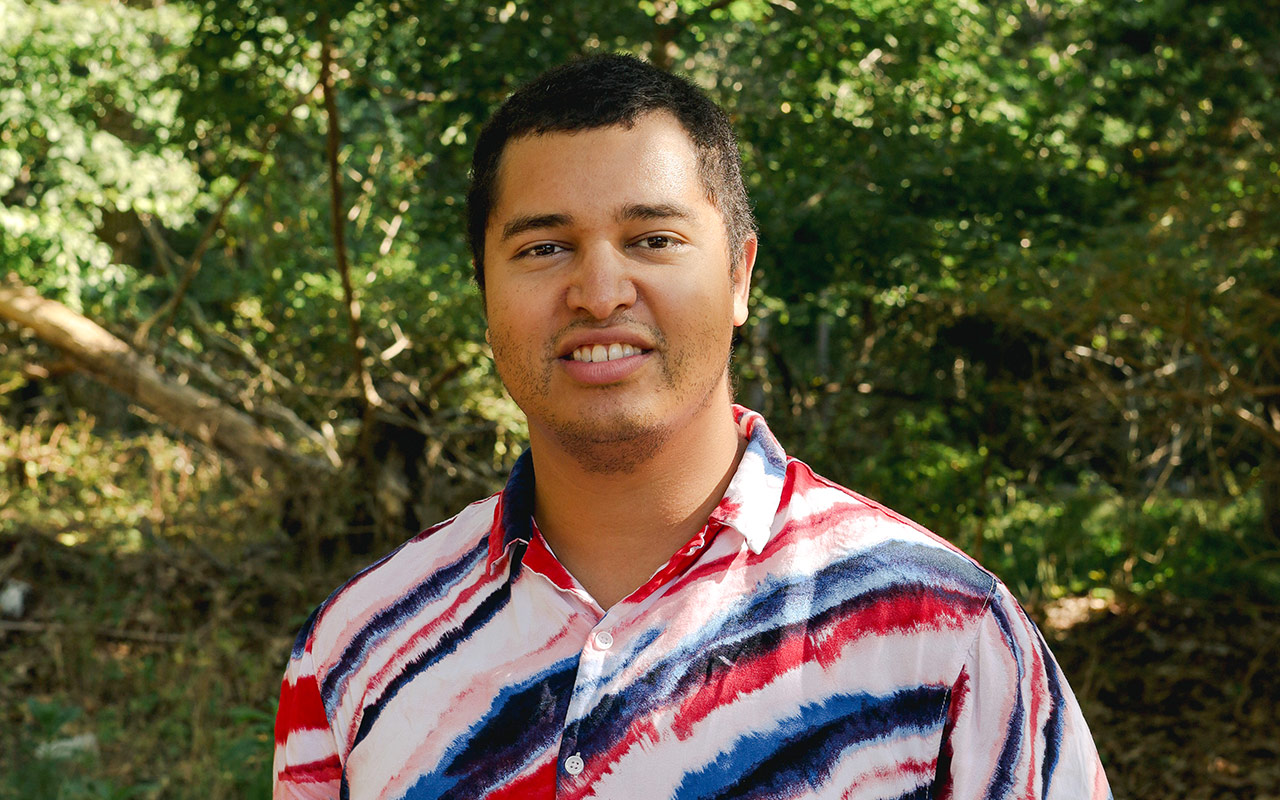 ‘Even though native people are just 2 percent of the population, and on Long Island, it’s even lower … I just think it’s so awesome that we’re this small community and we have connections to everyone.’

“I always think about my experience growing up being Shinnecock and how important storytelling is and knowing the truth of what happened here. Long Island history as it relates to Native American people, like Shinnecock people, I think that’s the starting point. A lot of my work is trying to fill in the gaps.

“I try to acknowledge those that came before me, use their research and present it in ways that people can enjoy it through art. I started my current photography portfolio in 2013.

“My project ‘On This Site’ looks at interesting histories that people usually haven’t heard about and tries to present them in site-specific ways through landscape photography.

For many years, we had been petitioning the federal government to acknowledge us for our continued existence.

“In early 2020, the house I grew up in was ready to collapse on itself from water damage, and animals were taking over. We ended up deciding as a family to try to restore the space maybe as an art space or studio. It is now Ma’s House, a communal art space for BIPOC [Black, Indigenous, and people of color] artists, located on the Shinnecock Nation Reservation.

“Even though native people are just 2 percent of the population, and on Long Island, it’s even lower … I just think it’s so awesome that we’re this small community and we have connections to everyone through this early history and the start of the nation. 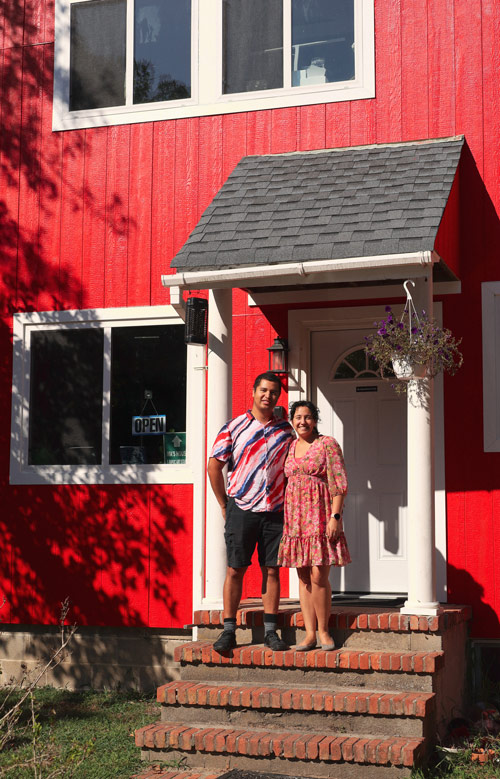 “Even here on the Shinnecock Nation Reservation, this was all fields. You could see from the ocean all the way to Montauk Highway. I think that Napeague still has that feeling. I think about how Long Island used to look, and where are those sites that you can still appreciate it?

“One of our proudest moments that we have is from 2010. That’s when the Shinnecock Nation received federal recognition. For many years, we had been petitioning the federal government to acknowledge us for our continued existence. Now we’re a part of 570 other federally recognized tribes. This ruling made it so that we had a place on the map.”