‘I did this because of my father. Now my grandchildren know that my father was Poppy. I’m Pop. Poppy had a car just like this.’

“It’s a 1955 Chevrolet Bel Air two-door. It was called the Tri-Five era. Cars from those three years — ’55, ’56, ’57— are still very fashionable. This is the original motor, original transmission. I have a passion for it because my dad owned one. He bought a new one in 1955. Before I got my license, he said, ‘We’re selling the car’ because people only had one car per family. My mother didn’t drive. I said, ‘No, please!’ I always wanted one. 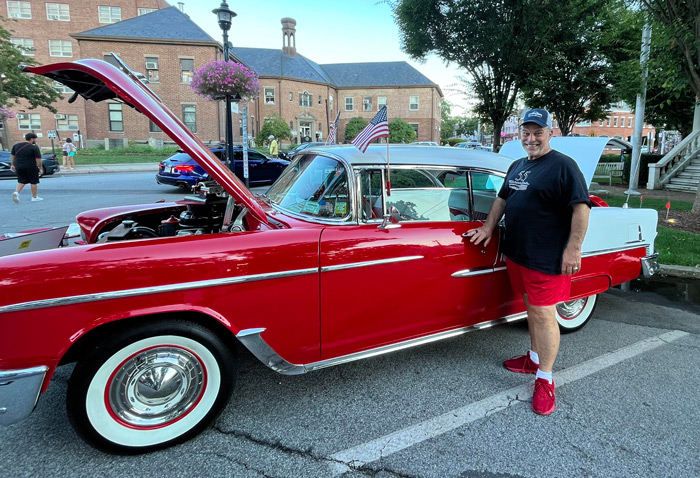 “Thirty years later, I was able to get this, and I have been working on it ever since. A good friend of mine had the car, moved to Florida with it, and did a lot of the work. I was always helping him with it. He was from Bethpage. He said it ran its course and asked if I wanted it. I said yes and continued building it. This was a 10-year project.

The car is just a throwback. All metal. No plastic. Real old American cars. 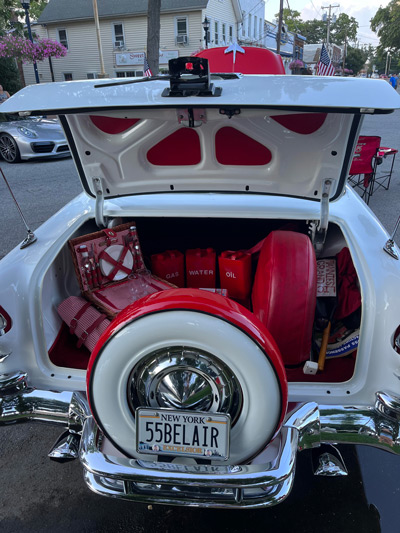 “It’s a throwback. I did this because of my father. Now my grandchildren know that my father was Poppy. I’m Pop. Poppy had a car just like this. The speaker is from a drive-in movie, and it does work. In fact, sometimes I bring a wireless mic and kids think the car talks — like the old days when they used to roller skate up to the window and bring the tray to the window and you’d order a hamburger and fries and watch a drive-in movie. The car is just a throwback. All metal. No plastic. Real old American cars.

“I drive the car about 800 miles a year. In the winter, it never comes out of the garage. All summer, I drive it around to car shows and parades. I did a Fourth of July parade. The firemen have me up there because it’s red and white.”