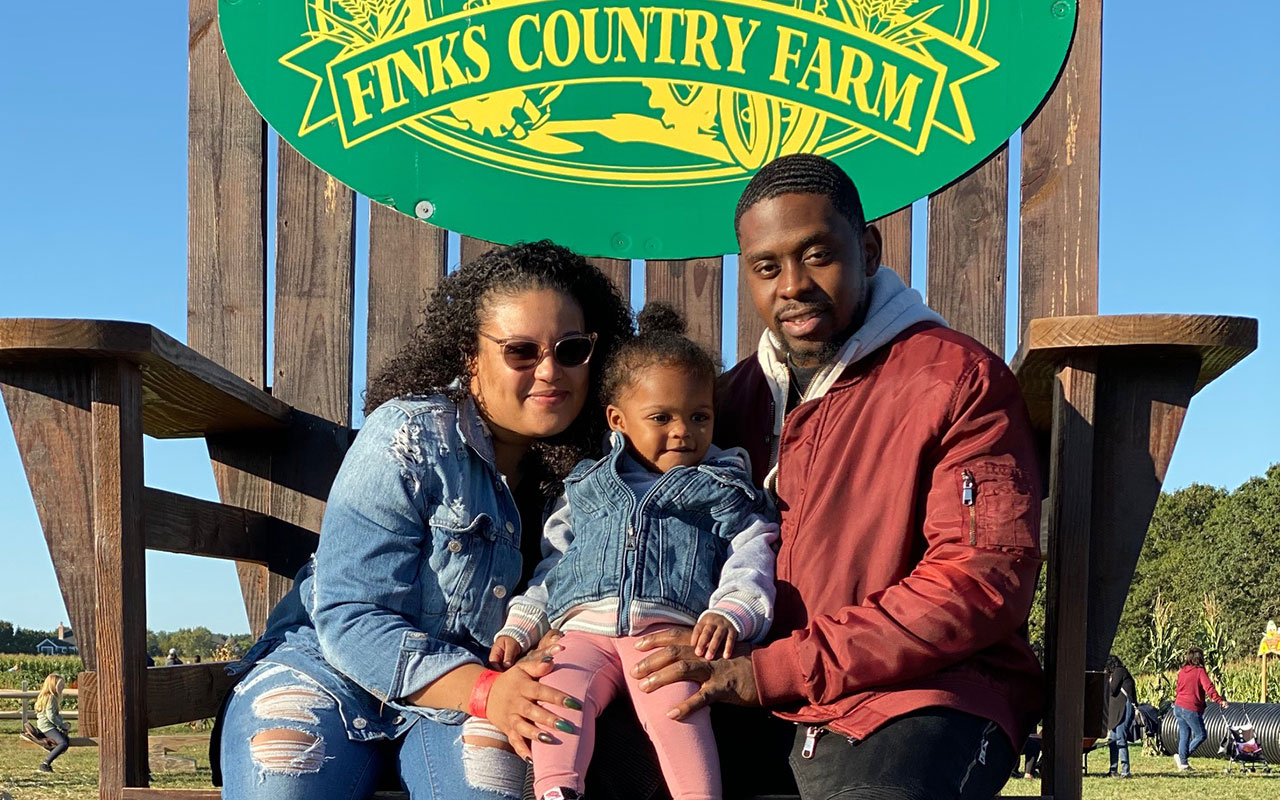 ‘Our daughter was diagnosed in January with an anaplastic ependymoma after two months of random vomiting, chronic headaches, losing weight, not eating, not drinking, sleeping for 22 hours a day.’

“I am a strong believer in educating and advocating about pediatric cancer, especially brain tumors, because it might save another child’s life. If this happened to my daughter, then there are other children out there that this may have happened to. Our daughter, Anisa, was diagnosed in January with an anaplastic ependymoma after two months of random vomiting, chronic headaches, losing weight, not eating, not drinking, sleeping for 22 hours a day. Her ophthalmologist said she had optic migraines. They diagnosed her with just astigmatism and said she needed glasses, which would cure the headaches. But that didn’t seem to be it.

“We brought her to the pediatrician, wondering if it was COVID. We had multiple COVID tests and blood work taken, and nothing came back positive. One evening, she was sitting on the couch with my husband, which was odd because she was sleeping so much during the week, and I walked into the house, and I looked at her. She was facing me, but her eyes were deviated completely to the left and would not go back centered. 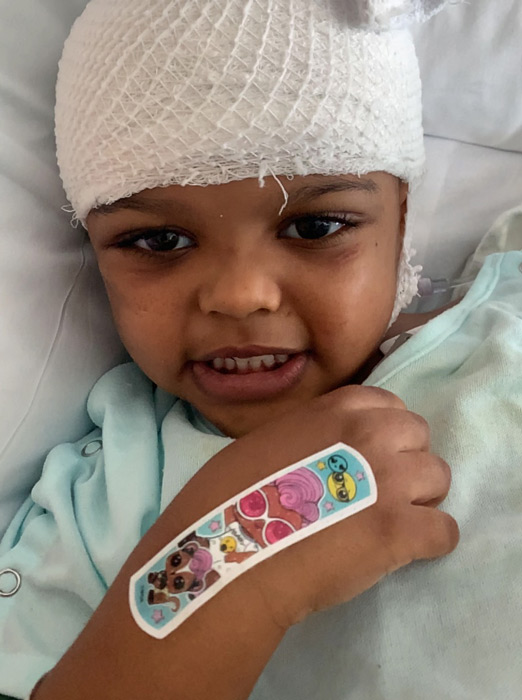 “I picked her up and put her in our bed, and as soon as I laid her down, there was a bright blue vein bulging from her forehead. I screamed for my husband, and we rushed her to the emergency room. As soon as we went in, the first thing the doctor said was that he needs imaging of the brain. Oddly enough, the entire time she wasn’t feeling well and complaining of headaches, we asked her ophthalmologist and pediatrician if we could have imaging of her brain.

“It just seemed like something was not right in the brain. So, when the doctor in the emergency room that night said he needed imaging of the brain when we’ve been asking for it, it seemed a little off to us.

“He sent us for an MRI, and when we got back to the room, there was a swarm of doctors inside waiting for her. They started hooking her up to machines. He asked me to step out of the room, and I was like, ‘I can’t. My baby’s in here. She’s crying. What is going on?’ He looked at me and said, ‘I have to be as blunt as possible; your daughter has a large mass on her frontal lobe, and pediatric neurosurgery is coming down to take her into emergency surgery.’

They told us to kiss our baby and wait in the waiting room.

“Because of COVID regulations, only one parent was allowed in at the time. So, nobody is with my daughter except for all of these doctors poking and prying at her. I just remember getting very faint and screaming for my husband. One of the nurses ran out to get him, and as my husband was coming in, they were wheeling my daughter into another room.

“Then the NP for neurosurgery came in and handed us a stack of papers and told us to start signing. I said, ‘We need a minute to read them over.’ She replied, ‘You don’t have a minute. There are no options for you at this moment. Your daughter is slipping into a coma.’

“At that moment I just felt very sick. My husband started signing the papers because there was nothing we could do. We had to sign for any risks. They explained the procedure, and my daughter was alert and watched everything as it happened.

“She was 2 years old. From the moment she was born, I always believed in communicating with my child, but I didn’t get to do that at this moment, and she was very confused. I was confused. My husband was confused. There were a lot of emotions. They told us to kiss our baby and wait in the waiting room.

“The first surgery was to drain the fluid from her head. The second surgery was to drain the fluid from the cyst that was wrapped around her tumor. And then she had a third surgery to take the mass out. The neurosurgeon said he was just going to go in and take out the cyst that wrapped around the tumor because he didn’t want to touch the tumor yet. When he went in, he touched the cyst and the whole thing collapsed, and they were able to take the whole thing out in one shot with no remnants. Everything was out, and it only took about two to three hours for that surgery, which was great.

“When we brought her home a day before her birthday, her speech was a little off, but we worked with her, and her speech got back to normal in a week. We had to watch for cognitive delays, but we just kept working with her fine motor skills or gross motor skills.

The neurosurgery team at Stony Brook Hospital that took care of her is absolutely outstanding. Her surgeon is God’s gift.

“We had an in-home nurse come in once a week to make sure everything was OK. One morning, we got a call that the nurse tested positive for COVID. I went into my daughter’s bedroom to check on her, and she had a 102.4-degree fever, so I rushed her to the ER. They said she didn’t have COVID, but that she developed hydrocephalus and an infection in her body, which they couldn’t do anything to treat until they knew where it was coming from.

“The neurosurgery team at Stony Brook Hospital that took care of her is absolutely outstanding. Her surgeon is God’s gift. He did everything possible to figure out where this infection was. They put her on antibiotics and even tapped into some of the fluid where her incision was to make sure it wasn’t infected.

“I was on FaceTime with the neurosurgeon, who said, ‘I’m going to take a gamble and put a permanent shunt in and see what happens.’ They put it in and the infection went away the same day. Before we went home, we were told that the results of the tumor came back and that it was malignant. It was a Grade 3 anaplastic ependymoma, which is a very aggressive type of malignancy that only occurs in the brain and the spine. Based on her MRIs, there was nothing else that they could see and said to start radiation therapy and then chemotherapy.

“We did 33 sessions of proton beam radiation at the New York Proton Center. She did amazing, and her doctors there were outstanding. We started chemotherapy in April, and it was very intense.

“She did have an allergic reaction to one of the chemo drugs, but we stayed strong, and everything went well through the remainder of her treatment. Because of the chemo, she did have some poor kidney function, significant hearing loss, and she now has neuropathy for the rest of her life.

“We finished chemotherapy on June 24, and there is nothing in her MRI except for post-radiation changes. The cancer did not come back, and we are completely blessed. She is the spiciest little thing you’d ever see. The hospital tells me all the time, if we don’t see that spice, then we know something’s not right. She is part of a bowling league that meets every Saturday morning and a theater group that meets every Sunday.

We raised $144 for the Child Life Program at Stony Brook Hospital during the Farmingville Street Fair on Oct. 3, and we are collecting items through an Amazon Wish List.

“My husband and I were just going over doctor appointments for the week when I turned to him and said that we have to do something. We raised $350 creating wristbands for the Pediatric Brain Tumor Foundation, and then $3,300 for Alex’s Lemonade Stand in June.

“I was counting all the money we raised when I realized we should be giving back to local hospitals where we are being treated. I love raising funds for research, but shouldn’t we give back to Stony Brook, to the people who saved my baby’s life? My husband said, ‘I don’t know. Maybe we should start a nonprofit.’ Yes. We’re going to do that. I went on the computer and researched how to do it, and we now have Cadesca Strong Inc. 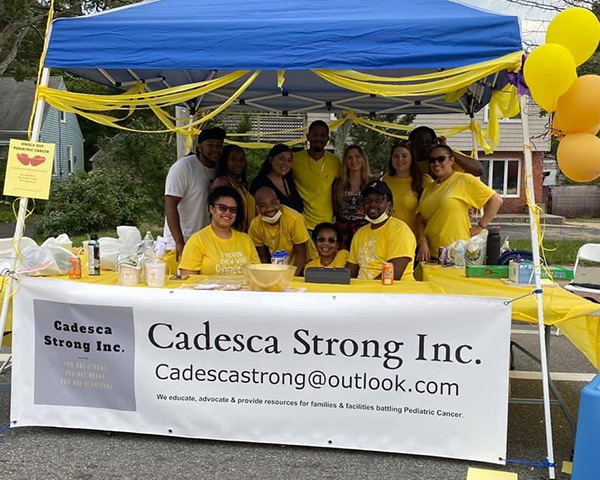 “We raised $144 for the Child Life Program at Stony Brook Hospital during the Farmingville Street Fair on Oct. 3, and we are collecting items through an Amazon Wish List.

“I have a large list of items that they need, which the community can donate. They need Lego kits. I know they gave a ton to my daughter. That can help a child strengthen their fine motor skills and put a smile on somebody else’s face.

“We both work full time. He works in a nursing home, and I work from home. It’s hard, but we’re doing our best. I think that we are getting to that point where everything’s looking up, and I want to be able to keep that energy and that positivity and make sure that I spread it to others as well.

“Anisa still has to eat her vegetables. She still has to clean her room and take a bath. We let her get away with little things, but we keep that normalcy.

“I want people to learn what and how important pediatric cancer is. I want to see the awareness continue and grow stronger for these families. Pediatric cancer is not something that’s ever going to leave, but if we know how to fund research to protect our children, keep them safe, and give them the right medications that aren’t going to hurt other parts of their bodies, then we are doing something.” 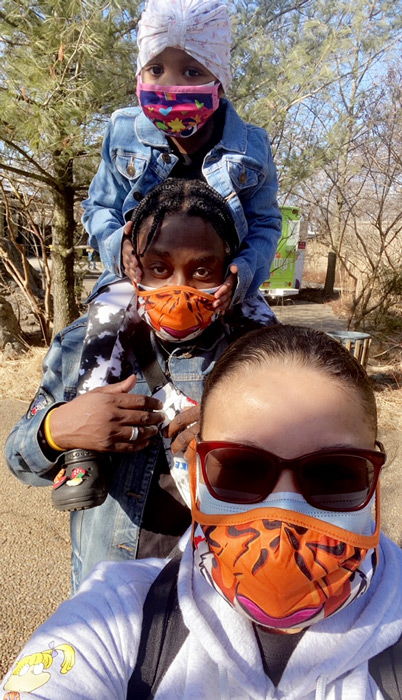