‘I realized I’d have to insert myself in the world in a way that felt like I had confidence because I had none at all except for with my piano playing and songwriting.’

“I was not a particularly sociable young man. Theater and being able to play piano was a way for me to not ‘literally’ communicate with people, but to still communicate with people. I felt really uncomfortable being at a high school party and doing the things you’re supposed to do at high school parties that I’ve seen in teen movies, but I felt really comfortable at the party if the family had a piano and I could sit and play a song from ‘Les Mis.’ It was a great way for me to be like, ‘Hey, this is who I am,’ without actually ever having to communicate with another human being. That continued for me through undergrad at NYU.

“When I got there I realized I’d have to insert myself in the world in a way that felt like I had confidence because I had none at all except for with my piano playing and songwriting. I knew I wanted to write musical theater and would write the music with somebody else’s lyrics. Then I realized that finding another person to write the lyrics for me would involve having to insert myself into social situations with other human beings who I didn’t know. I thought, ‘What a terrible idea! I should just write lyrics myself.’

“By the end of my time in undergrad, lyrics became just as important to me as the music. I turned into the man I am as my writer voice was taking shape. My work has always been so tied to who I am as a person and how I’ve moved about the world. It doesn’t feel that long ago where I was nervous about being in small groups of people. It’s so funny to me that I don’t even think about it anymore. It’s the same with performing. When I was a kid I loved theater so much and I just wanted to be in the theater even though it scared me. I loved the environment.

“If there was anything I could do to be in a theater I would do it, even if it terrified me. I never imagined 15 years ago that I would be able to casually get on a Broadway stage with a keyboard and play a concert off-the-cuff, or that I would be playing a concert at Lincoln Center, talking to the audience and playing my own stuff. It’s not even work now. I love it and it’s just another day! It’s so far removed from what more than half of my life was.” 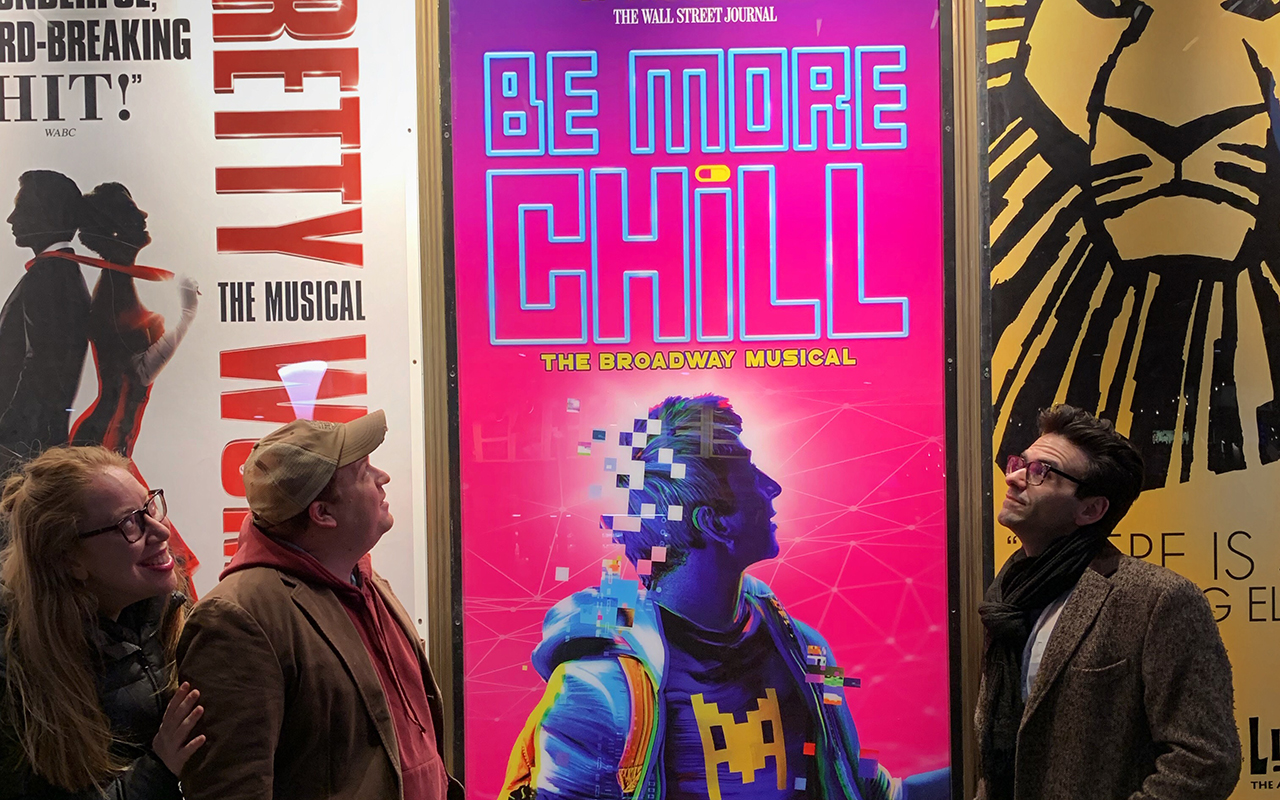 “When I started writing musicals, I was most fascinated by what it feels like for people who feel like they don’t quite fit in. I am fascinated by people who don’t necessarily seem remarkable in general. Part of that is from growing up in Garden City, in the suburbs. It’s not like living in New York City or Hollywood. It’s this idea that this is where normal people are. Finding the strangeness and the weirdness in people who are either normal or on the fringes is ingrained in me.

“I have many songs where a character will have a huge emotional moment, but the subject matter of the song is very small. In ‘Michael in the Bathroom’ from ‘Be More Chill,’ Michael has a panic attack in the bathroom about getting in a fight with his friend. I have a song in ‘The Black Suits’ called ‘Social Worker’ about a kid having a panic attack recounting a visit to the school social worker; he says the visit is no big deal. I love the idea of using musical theater to examine small moments and dramatize them in a way that makes them as dramatic on a stage as they feel in real life.

“The natural progression of that is looking at characters who normally have to exist on the sidelines. I’m drawn to misfits because in my experience, I have certainly felt like that. I have been able to find my tribe and find my family. I love that I think that’s something that happens in real life and I want to try to do that in my art. What’s funny about that is even in the show where everyone’s a misfit, there’s still going to be people who are more ‘misfitty’ than others. I’m always like, ‘But what happens to that one when she leaves?’ or ‘Why can’t that one have a song?’

“That’s why in my musicals I have huge songs for characters that other people would call minor. They’re only minor because we happen to be watching a story about character A, but when character B walks off the stage, they’re the center of their own story. That’s something that so amazing about theater, because at a certain point someone will have a scene and they’ll walk out of the playing space of that room and go somewhere. I love thinking about how that character is going somewhere and we don’t know where!”

“As my voice was forming as a musical theater writer, I wrote my first musical, ‘The Black Suits,’ which is set in Garden City. It’s about a high school garage band trying to win a Battle of the Bands. I couldn’t help but write about the suburbs and the world that I grew up in. When people see it or listen to it, they automatically assume that I was a rocker kid who was in a band. That could not be farther from the truth. As much as I see a lot of my own life and the people in my life in that show, it’s not autobiographical at all. It was this idea of looking at a garage band like a family that comes together with the knowledge that college is going to break everyone apart. That came from this idea of working on theater and being in rehearsal.

I love the idea of using musical theater to examine small moments and dramatize them in a way that makes them as dramatic on a stage as they feel in real life.

“I came up with the idea when I was musical directing my brother’s production of ‘The Wiz’ at Garden City High School. I was in undergrad and they had lost their musical director, so I did it. Being around high school kids after I was four years removed from high school made me feel like there was a real connection. I wanted to write something about theater and this idea that you’re so close to these people, you spend all of your time with them, and then the show opens and you don’t see them anymore. ‘The Black Suits’ comes from how it’s so celebratory but also melancholy. It takes on a new meaning now because of the last few really wild years. I was working pretty constantly after writing ‘Be More Chill’ and seeing it have a life on Broadway. BMC led right into ‘Broadway Bounty Hunter’ Off-Broadway, and that led to ‘Love in Hate Nation’ at Two River Theater, and that led to BMC in London. It was really exciting, and then the pandemic happened and shut it down.

“It has been the strangest year because I have been going nonstop since 2017 and then it felt like the rug had been pulled out from under me. The city has always felt like home because my grandparents and my aunt would take me there all the time when I was a kid. I never thought there was any way that New York City was going to shut down. I could not imagine a world where Broadway was not happening even for a day. The fact that it has been this long is beyond wild.”