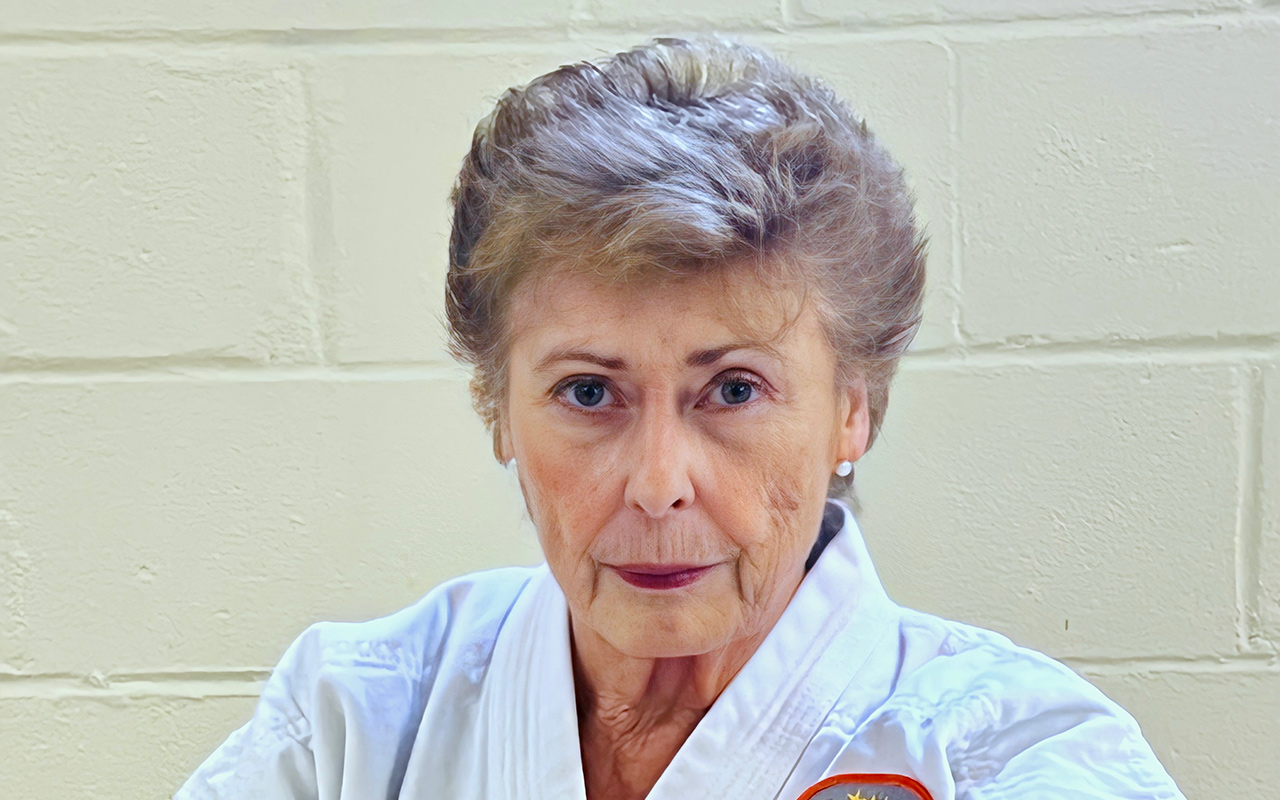 ‘I always felt the spirituality in the martial arts. When I was training, it just went through me in that spiritual way. And it was a great connection for me.’

“There’s a lot of history in my life. It’s like 50 years of martial arts, so a tremendous amount of growth and change over the years. I was in Okinawa [Japan] four times. The last one was an invitation from the Okinawan government in 2019 to represent Isshin-Ryu karate and the USA on a high-level black belt tour. So that was an amazing thing. I wasn’t sure I could handle it, but I did. And it was an awesome trip. 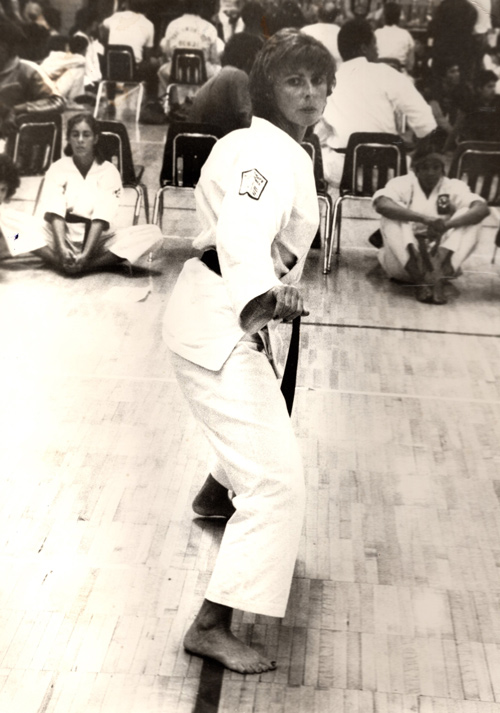 “I was the only female and the highest ranking one in my group — and the oldest one in my group, ha-ha. The tour took us to walking the path of the old masters, all the founders of the different styles of martial arts.

“One of the best days for me was when we went to a martial arts museum in Naha, and I brought my first book with me — which took me 20 years to write, by the way. Years prior, Isshin-Ryu master Angi Uezu had sent me some pictures of older masters, his family and old ‘Okinawa Times.’’ And he said, ‘Please make a book.’ And I thought, ‘I don’t know what to do with that.’ While I was writing the book, I went to look for something else, and the photos fell out of the bookshelf right into my hand. It’s as if they said, ‘We belong in your book.’ 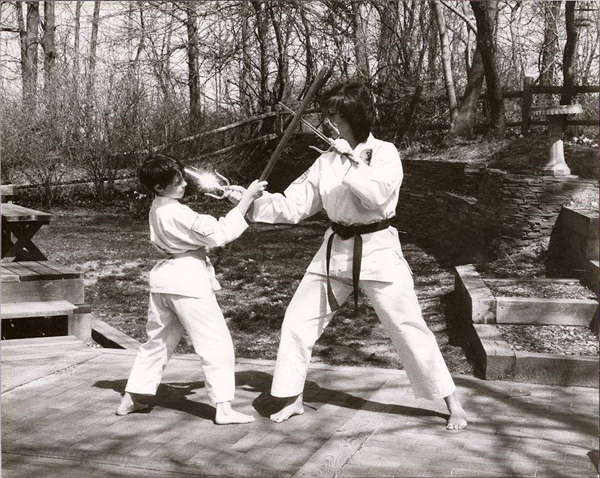 “The masters, when they saw it, got so excited about the photos that went in the back of the book. The first story I ever wrote that was published was for a magazine called TaeKwonDo Times. This is when I was experiencing the spiritual aspect of the martial arts very strongly, and I’m reading ‘Jonathan Livingston Seagull.’

“So, my story was called ‘The Limitless Spirit of the Martial Arts.’ And I kept trying to get a picture with a rising sun and a seagull across it. I sent them the little one-page story, and when it came out, on one side of the paper was my story, the sun, seagull, and on the other side of the page was a full picture of me. The whole page! This magazine profiled Bruce Lee, Chuck Norris, all the top guys. 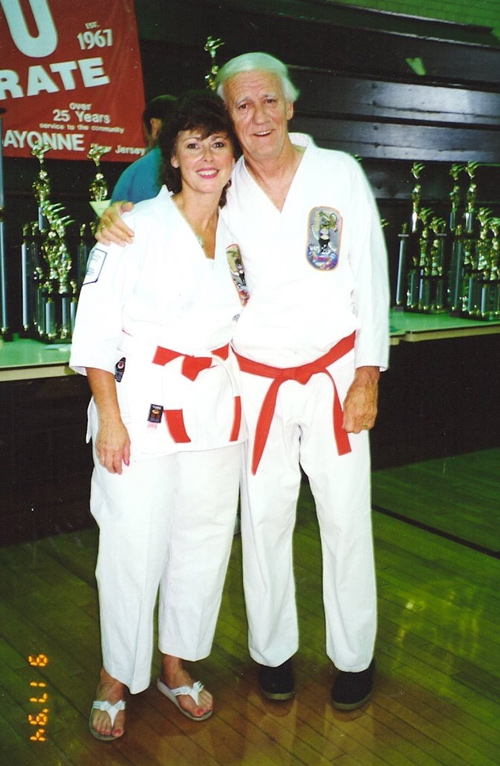 “Normal people get a little square in the corner. That was amazing. That’s why the book became ‘The Limitless Spirit of the Martial Arts.’ I always felt the spirituality in the martial arts. When I was training, it just went through me in that spiritual way. And it was a great connection for me.”

I want to tell people to follow their heart. Be open to possibilities. We never know where life will lead!

“In 1972, after my second baby was born, I joined a health club in Smithtown. I really didn’t care about exercises, ha-ha, but they did have a self-defense program. It was so much fun. When they disbanded that program, my friend and I had a gentleman come to the house and teach us tae kwon do in my living room, which really piqued my interest.

“And because he was gentle in his approach, it didn’t turn me off to martial arts. But then he couldn’t teach anymore. So I started to look for a real dojo, and all the dojos were, ‘No, we don’t want women. You could take a self-defense class, but I’m not teaching you karate.’ That was the mentality in that time. I finally found somebody with a program who was teaching Isshin-Ryu, which used a vertical punch instead of a corkscrew, and that made all the difference to me. I fell in love with it. That’s how I discovered my sensei, Nick Adler. 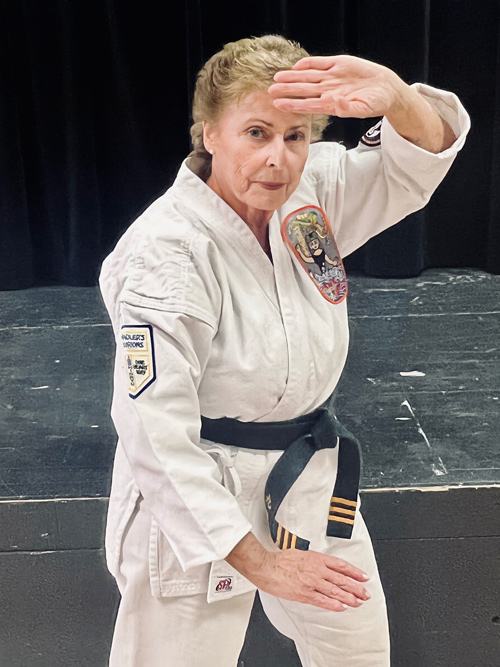 “So, by 1974, I was with my sensei’s dojo. He didn’t care if you were a man or a woman. You train the same way. You work just as hard. My goal was to be a brown belt and be able to defend myself. But somewhere along the line I kept training, became a black belt, and then it continued with different levels.

“In 1978, sensei and I opened Smithtown Karate Academy together. It was hard because I never planned to teach or own a school, but I was able to manage to get through it. I had to learn confidence. The only goal that I had after teaching was sandan, which is a third-degree black belt and in the U.S. a teaching level. And since I was teaching, I wanted to be a sandan. And that happened when I won first place in the all-men’s weapons division — they didn’t have it for women — at my sensei’s teacher Don Nagle’s tournament. 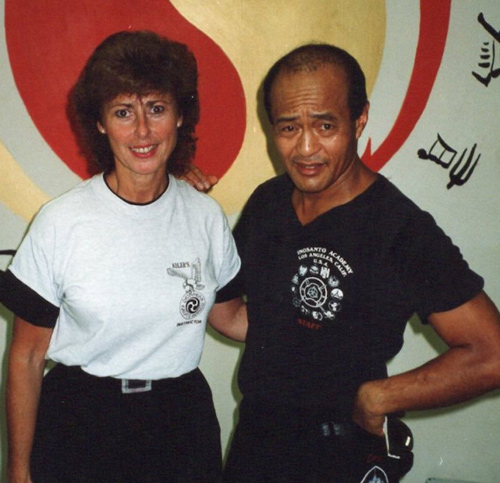 “So, I had two special people there when I got that. I had a lot of insecurities growing up and was not confident. And what shocked me is, 10 years ago, I went to visit my best friend that I grew up with, and she pulled out her high school journal and we went over it. She had put under my name, ‘Most Likely to Succeed.’. I’m like, ‘You saw that then? I never saw any of that.’ I want to tell people to follow their heart. Be open to possibilities. We never know where life will lead!” 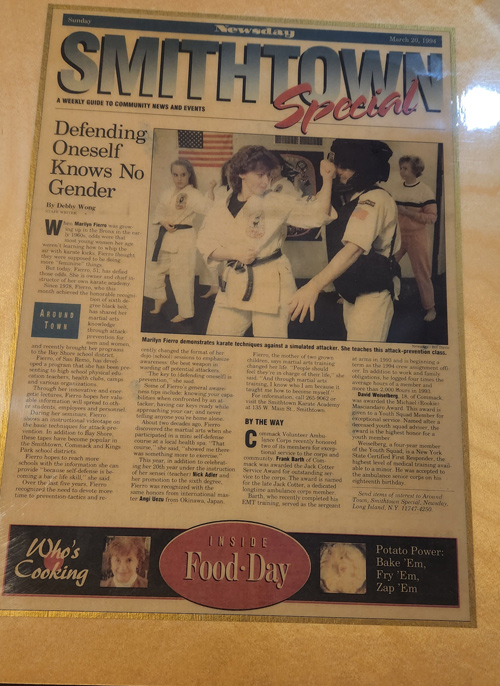