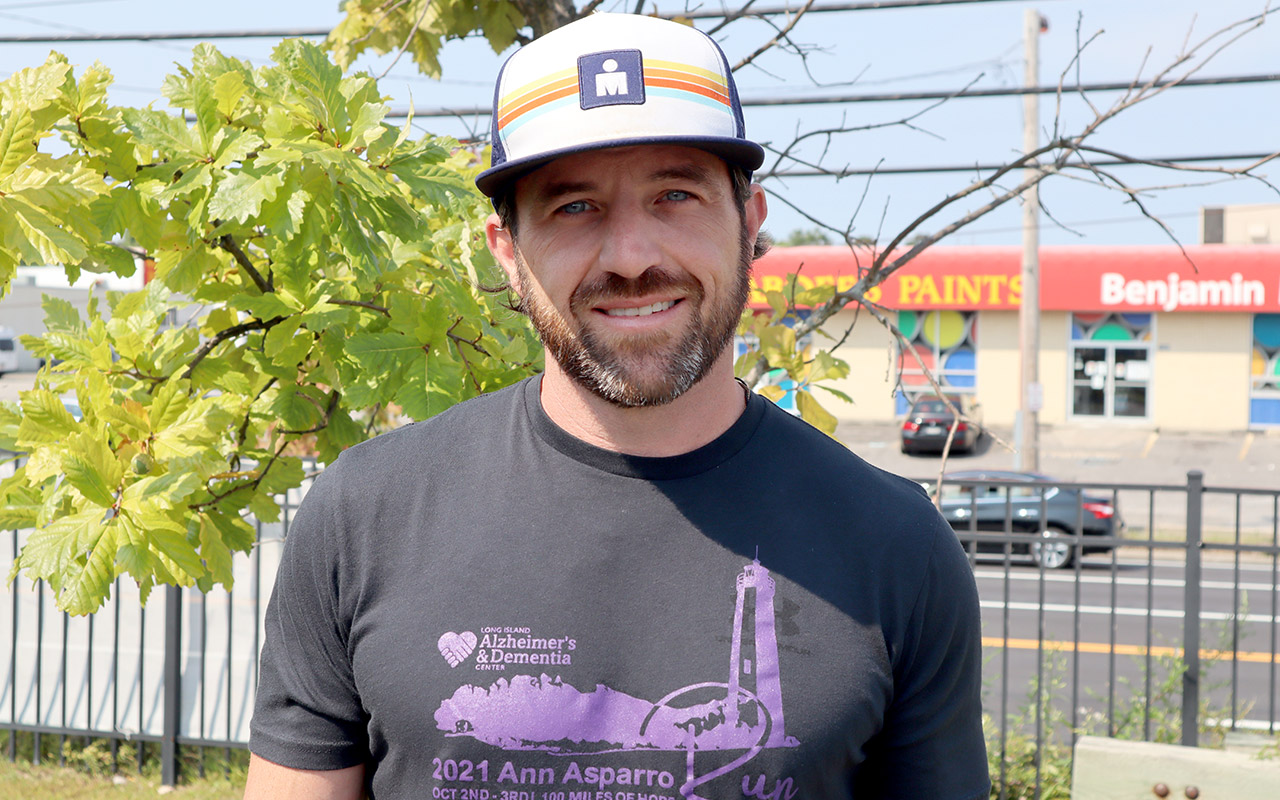 ‘I was crazy. I ran 90 miles across Long Island over three days and we raised $38,000 for the Long Island Alzheimer’s and Dementia Center.’

“My grandmother, Ann Asparro, was living with Alzheimer’s for about four years. She was at Parker Jewish Nursing home and, every Sunday, I would go and have breakfast with her. Alzheimer’s is an awful disease. A majority of the time, I would say something and then she would just repeat herself over and over. I could tell she had no clue who I was. I felt uncomfortable, so I would stay for 10 minutes, and I would leave.

“Then I said, ‘you know what, if I was in this situation, she would be with me every day, all day.’ So, I went back the next day, and each time I would stay a little longer. I said, ‘I got to do something different. I got to do something more.’ This disease is awful. I’m going to honor her and the person she was and really try to create a platform to talk all about Alzheimer’s. In 2016, I decided to do these extreme runs to raise awareness for Alzheimer’s and honor my grandmother. It was crazy to run across Long Island.

There are days when I don’t want to get out of bed and run. Those days I just think about the caregivers. I got to do it for them.

“Everyone called me crazy. I was crazy. But I trained hard and at the end of that year, I ran 90 miles across Long Island over three days and we raised $38,000 for the Long Island Alzheimer’s and Dementia Center. I started this ultra-distance run because I wanted to heal my own family. But soon other families would come up to me and say, ‘I’m going through this. Thank you so much for what you’re doing,’ and I understood this was so much bigger than my own family. 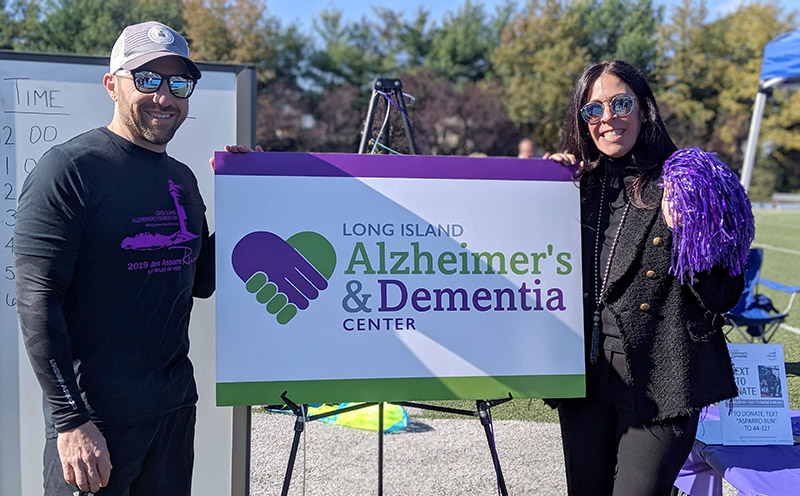 “The next year, I ran 75 miles in two days honoring what would have been my grandparents’ 75th wedding anniversary. In 2018, I decided to do an Ironman, which involves a 2.4-swim, a 112-mile bike, and a marathon all in one day. About 1 percent of the population completes one a year. I didn’t know how to swim. I figured caregivers don’t necessarily know how to be a caregiver, but they show up every day. So, I said, ‘Let me take this challenge on. I’ll teach myself how to swim,’ and I did.

“I showed up to the Iron Man and there were 2,000 other people getting in the water at the same time as me. I trained for seven months, and my race was over within 45 minutes. Someone’s elbow hit me in the back of the head as I was taking a breath, so I ingested all this lake water and I started vomiting. I was embarrassed and uncomfortable and I didn’t know what to do. I just thought about the caregivers. I bet the caregivers feel embarrassed. They set out to do so many things within their day and it just gets ruined because they need to take care of someone with Alzheimer’s or dementia. 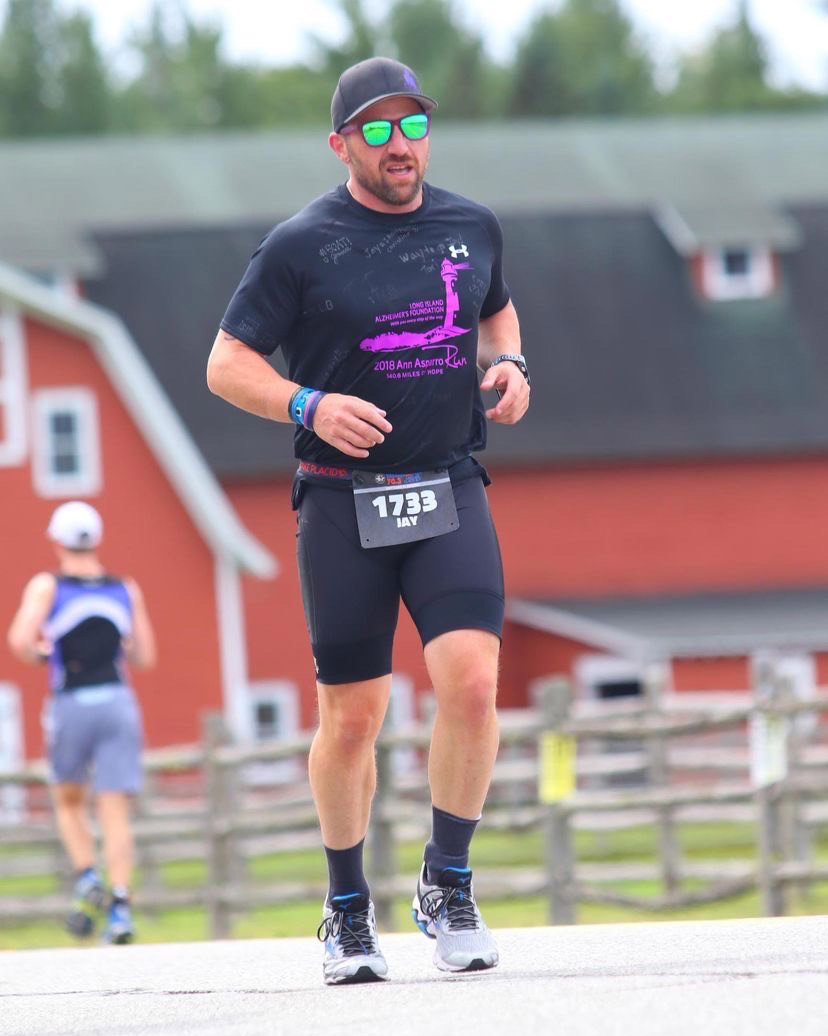 “Instead of thinking internally about how bad my day was, I thought about the caregivers of people, so I grabbed my running shoes and ran a marathon on my own that day. I don’t need to be in the race. I’m not going to stop. I’m going to keep training and I’m going to show the caregivers that I understand your life gets flipped upside down. My race got flipped upside down. This is a reflection of what you do.

“I went back six weeks later, I got in that water, and nobody hit me or kicked me, and I did a half Iron Man. I thought I was done running and then my grandmother passed away in April 2019. We got so close to raising $100,000 in donations that I said I would run 100 miles on a track to try and get to that mark. It took me 29 hours to complete, and I didn’t sleep. 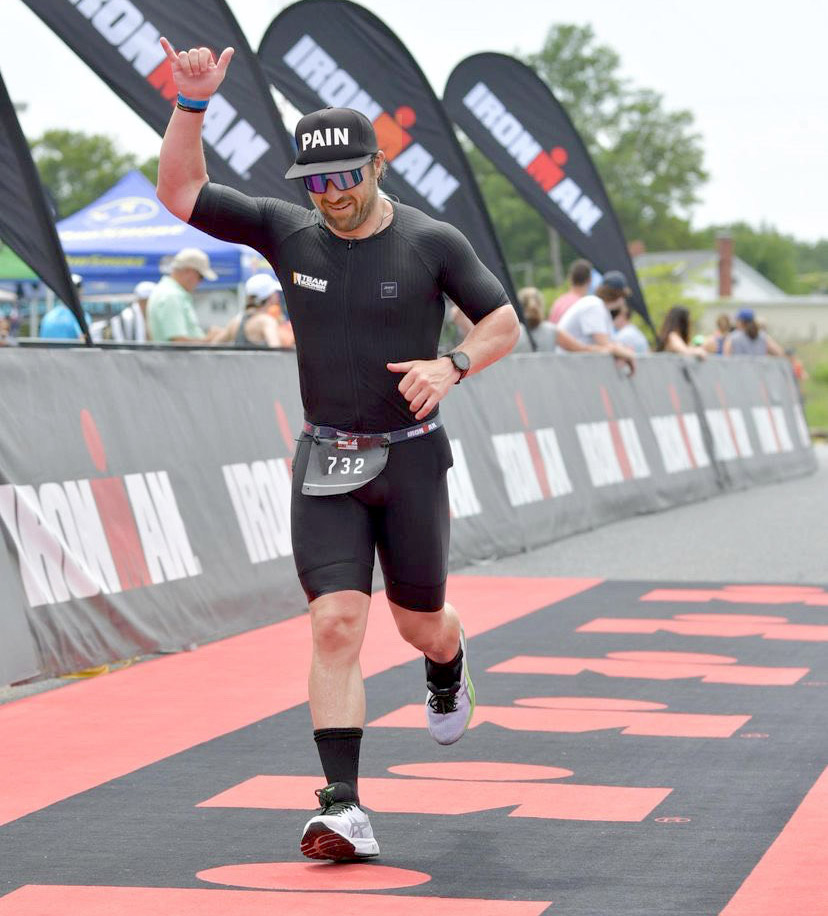 “There are days when I don’t want to get out of bed and run. Those days I just think about the caregivers. I got to do it for them. It’s the days when it’s the most difficult and your body hurts when the progress happens. It gets daunting. I have a full-time job. I have an 8-year-old and a 5-year-old. I coach their soccer teams and people help me a lot but it’s hard to get involved. I’m constantly thinking about training every single day.

“Mentally wise, I’ve been preparing for this since January. But I am 42 years old now, so my body’s getting a little worn down. I am going to run 100 miles from the Montauk Lighthouse to the Long Island Alzheimer’s and Dementia Center in Westbury on Oct. 2 and 3. As of right now, we have raised close to $27,000.”