‘Most of the things I find, it’s more significant to me about where they came from and where I found them than what I could get for them on eBay.’

“One of the biggest questions people have about metal detecting is, ‘What is everything worth?’ I tell people, if you do it to make money, you probably couldn’t afford the battery in your metal detector. It’s not why I do it, although I have found things that are valuable. I do it as a hobby, and what draws me into it is the 1700s history on Long Island. Some say I should leave things like these to archeologists, but I’ve reached out to many local officials and other figures about exploring sites, and so far in my experience, unless there’s a structure to preserve, the responses I receive is that there’s no historical value to explore. I wish the towns would be interested, because I do think these sites are significant, but honestly, if I didn’t find what I find, these artifacts would be lost.

“I own a large land-clearing company, and we clear properties from Manhattan to Montauk. We’re clearing for roads, developments and stuff like that, and at some of these sites, I can save something before it’s literally gone. For example, this man had purchased a big farm on the North Fork where I did a job, and he gave me permission to metal-detect there. Once I started bringing up the property’s history, he was interested, so I said, ‘Whatever I find, build a display and I’ll give everything I find back to the farm.’ I found musket balls, buttons from the War of 1812, all kinds of really cool artifacts from the 1700s to the turn of the century. Some things I donate to local historical societies, but I also have a huge collection of things I’ve found that I just don’t have the time to sort through.

“I have never sold anything. Someone once offered me $40,000 for my best find, a George Washington inaugural button, but I told the guy, ‘No.’ I don’t need the money. I have a pretty successful business. Most of the things I find, it’s more significant to me about where they came from and where I found them than what I could get for them on eBay. I’d rather find the right home for these things, especially the early military stuff. These artifacts will probably end up in a local historical society someday.”

When I found the remnants of a house in the woods, within minutes I started finding buttons and artifacts from the 1800s. It made me realize, ‘Wow, this stuff really is out there.’

“One of my best sites was in eastern Suffolk County, because detecting there told a story. The more I dug, the more it told me about what they were doing on that land. Some of the artifacts were clam and oyster shells, and it turns out it was once a trading post where they brought shellfish of the Carmans River. I also found around 50 Colonial coins, plus buttons and British coins. Just by metal-detecting the site, I can tell you how long the site was occupied, and if they were more for or against the British, just by the artifacts.

“I always really cared about history. It was one of my best subjects in school, and I had metal detectors as a kid, but they were always the cheap kind, and I had no idea where to go and detect. A lot of people, they just turn up nails from the ’70s or bottle caps, but one time when I found the remnants of a house in the woods, within minutes I started finding buttons and artifacts from the 1800s. It made me realize, ‘Wow, this stuff really is out there,’ and it can be found if you know what you’re looking for. 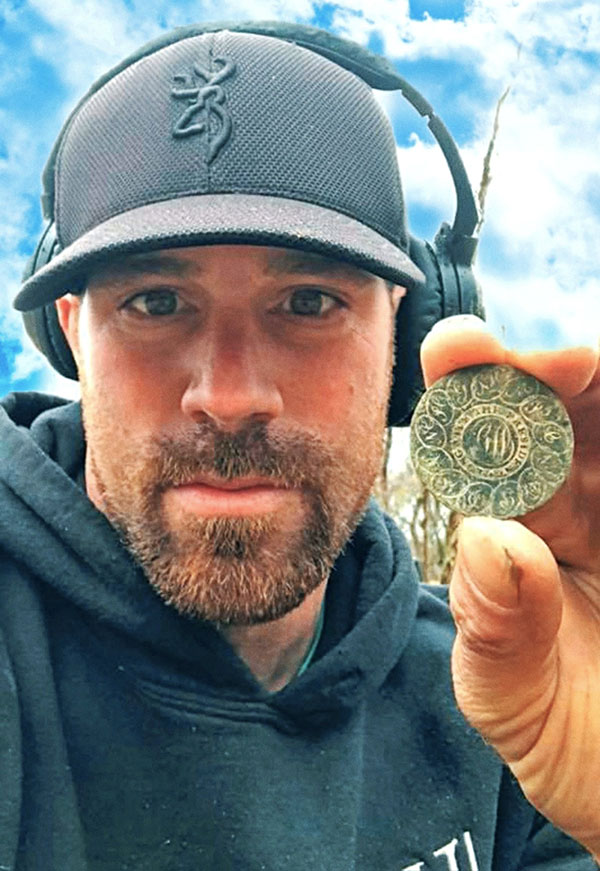 “It comes down to getting a knack for how to find sites and how to get permission to look. I start with old maps, which give me an idea of where a site might be or how old a property might be. Sometimes I can walk through woods and can tell by the vegetation whether it naturally grew there or was planted. If it was planted, it usually means a house was once nearby. If I find a site that dates back to the 1700s, I can dig it for a few hours a week over six months and find things. If it’s a farm field, you can dig there for 10 years and still find things. Plus, every time you dig, you open the ground up to find things that are deeper. The first dings I hear are often silver coins from the 20th century, but then all of a sudden, you find a large cent from the 1800s, and then maybe coins from the 1700s; they’re underneath everything, buried deeper. The best finds are usually between six inches and a foot deep, although in a farm field, they can be right on top because the soil gets plowed. For the deep stuff, you need expensive equipment because the cheaper machines just aren’t going to do it.”

By the time I’m done and retired from digging, I’ll have a massive collection that can help tell the story of the people that were here.

“The oldest things I’ve found on Long Island are from the 1600s; I’ve dug up belt buckles and spoon handles in Smithtown. My greatest find is my George Washington inaugural buttons. You would have had to have been at his inauguration in 1789 to get one. There are a few different varieties of the buttons, and I have two. Those are extremely collectible, and I’ve been offered quite a bit of money for them, but I’ll never sell. Those will stay in my family. 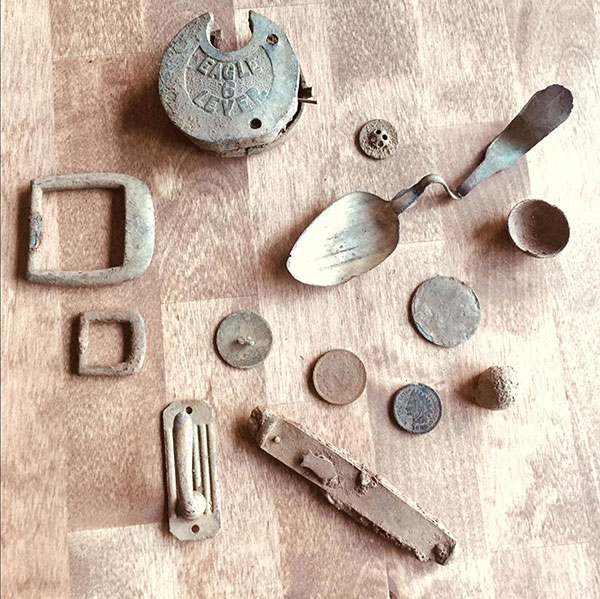 “Getting permission to dig, you have to be willing to knock on doors and ask. My business helps a lot, because I meet farmers and builders who own land all over Long Island. When it comes to old houses where people still live, I tell them what I’m into, and they can look at what I find and keep whatever they choose. I have found jewelry that someone in their family lost decades ago. Anything I find that the homeowner wants to keep, I’m more than happy to give it to them. I have found a diamond ring and a few gold rings that the landowner said I could keep, but these don’t have any historical value. To a Colonial digger like me, they mean nothing because during the 1700s, it would have been very rare to wear a gold ring.

“I have six kids, five boys and a girl, and I work six days a week, so I only get a few hours on the weekend to do this, and sometimes I’ll bring them along. My second oldest son and my daughter, who’s third, plus my little guys, they come along and love to help. I can see that my second and third are following in my footsteps, that they really enjoy this. I got a feeling we have a family of future treasure hunters. I think it’s a great hobby for people to get involved in. For me, I can get my kids outside and can put a little story together for Long Island, because as Long Island gets more built up, by the time I’m done and retired from digging, I’ll have a massive collection that can help tell the story of the people that were here, the history that was going on in the different towns where I found these artifacts. I will eventually put these things where people can go and look at them, and it will paint a picture of what was going on and what life used to be like back in those times.”