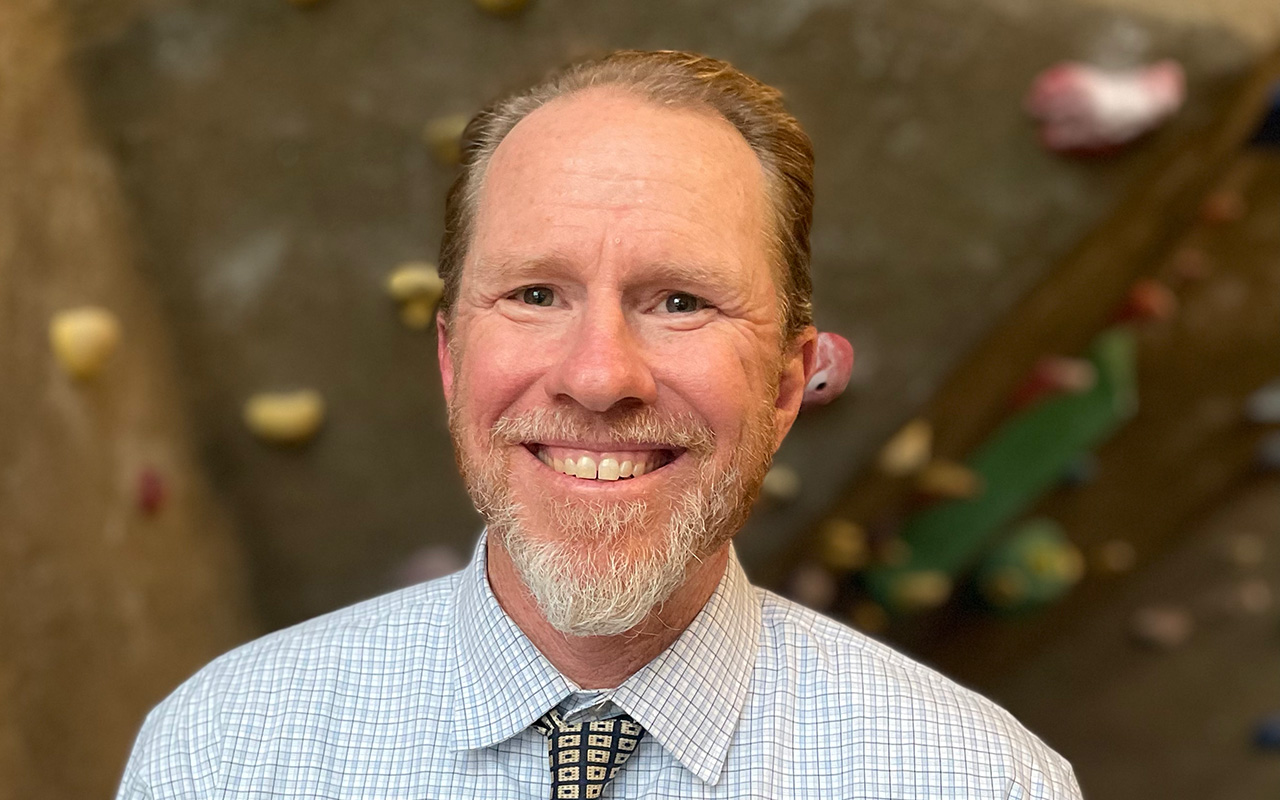 ‘Climbing took me all over the world. It took me to Europe. I packed up my bags and spent a whole summer climbing in Céüse, France.’

“Climbing is way harder than people think. These big, strong, muscle guys show up and can barely climb to the top. It can take years of practice and training. I started climbing in high school with a friend. During senior year, my gymnastics coach would take me climbing. My coach was a 5.13 climber, which meant he could climb some of the hardest climbs in the world at that time. There weren’t many rock-climbing gyms back then so, it was all outdoors.

“Sometimes, instead of gymnastics practice, we’d go climbing. I lived in Colorado, and he would drag me out to these intense routes, and I would get mad at him because I thought they were too hard for me. I was following him on these hard climbs, and I learned so much. He would tell me how to clip, how to turn, how to move and use my feet. The higher the number, the harder the climb. I went from being a 5.8 to a 5.12 climber in one year. I took a break from it once I got to college to do gymnastics, and when that ended, I started climbing again. I was five years older and a lot stronger. The longest multi-pitch route I’ve climbed is somewhere between 500 to 700 feet. 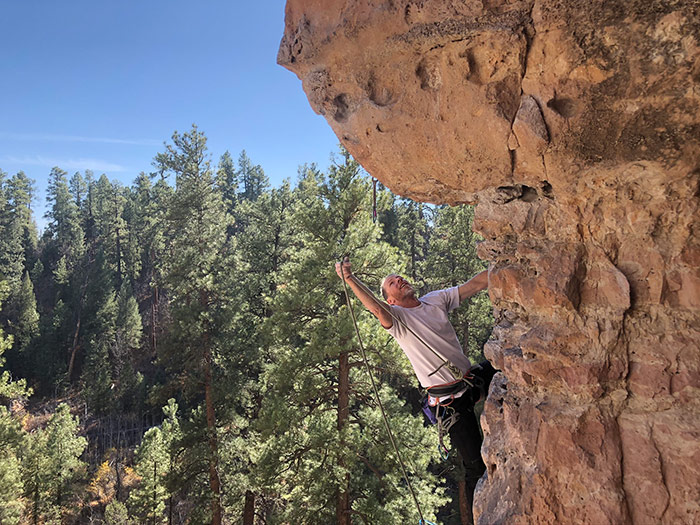 “Climbing took me all over the world. It took me to Europe. I packed up my bags and spent a whole summer climbing in Céüse, France. I was with a friend and my high school gymnastics coach. All we did was climb for the entire summer. Most rock climbing has natural features. Sometimes people will chip or drill holes into the rocks. You look at the rocks and go, ‘I wonder if I can climb it?’

“A lot of climbs are just big caves. The steeper it is and the more overhanging it is, the harder it is. The hardest one I was able to climb was a 5.13 in France. It took me the whole summer. You can work a route for months; sometimes people work them for years to get to the top. When you work a route for a long time, you know every move. You know where your foot should go, how you’re going to turn your body, if it’s a good sharp edge to grab, where the rests are and where the hard parts are. It’s all about getting through those moves as efficiently as possible so you can get to the top without falling, but you do fall when you’re bouldering. You fall a lot.”

It goes through your head, the “What if?” His life was in my hands.

“I always climb with ropes, but I don’t wear a helmet. I mainly did sport climbing. This is when you’re climbing hard routes that have bolts in the rock to clip in protection devices. The routes are clean, meaning all the rock has been tested, so if there’s any loose rock, it’s usually pulled off by whoever put the route up. The few close calls I’ve had were from traditional climbing in high school. I was learning to lead climb, which is when you’re climbing above your equipment. You can either clip into the rock or attach your own protection device to do it, which is either a camming device or a wall nut. If you don’t put it in right, it comes out. As you climb up and clip in, the further you space them out, the longer you fall.

“We were climbing in Boulder Canyon, and I was at the end of a 300-foot climb, so the hard part was over. There was a 25-foot section of pretty easy climbing, and I put a wall nut in, but not very well. I’m at the very end, and I grab a rock, and it pops off in my hand. I fall. I’m flying through the air. I’m waiting for my protection to catch me, but my last piece came out. I fell about 60 feet down before my rope caught me. I stopped climbing for a bit after that. I was so freaked out. I was only 17. 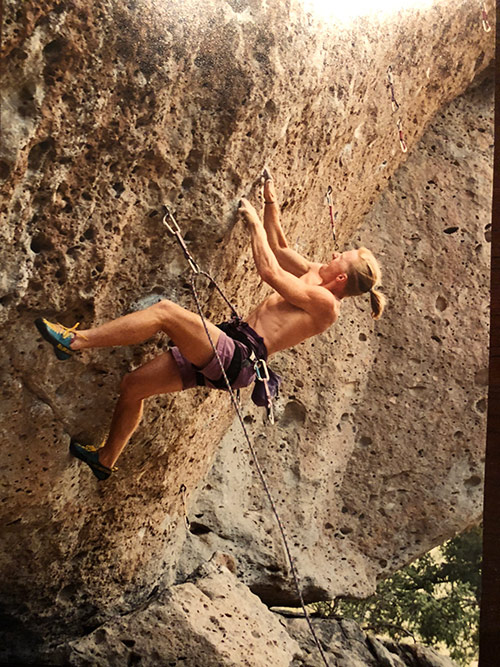 “Another time, we were climbing at the Garden of the Gods in Colorado, which were sandstones, brittle rock. We were doing a mix of sport and traditional climbing. I was belaying for my coach, so he was above me. All of a sudden, a rock the size of a basketball flies towards me. I ducked, while still belaying him, and he fell below me until his equipment caught him. I threw myself forward into a rock, and my chest was scraped and bloody. It was a hard fall because when he fell, there was a lot of extra rope, so it created more distance. It’s a lot about trust. It goes through your head, the ‘What if?’ His life was in my hands.

“We shook it off and kept climbing. We’re at the very top, and I’m traversing. A rock comes loose and tumbles down. It’s the size of a car. We’re freaking out and yelling, ‘Rock!’ in case there’s somebody below us. This was a popular climbing place, so we thought we killed somebody. Luckily, nobody got hurt, but we were shaking.”

As a climber, you get to go to locations that you would never typically experience. You wouldn’t even look for some of these spots unless you were a climber.

“I’ve done some competitions in the past. There’s bouldering and rock-climbing contests. I did a couple of them, but I never pursued it much. I liked climbing for my own personal experiences and hanging with my friends, not to win something. Climbing is a community. People are friendly and willing to help. I’ve met people from England, France, Spain, people from all over the world. You just hang out and climb all day. I miss it, and I would love to get back to that lifestyle, but I’m older now. I can’t climb at that level anymore. It would take at least a year to get in shape to climb as I used to, and then I would have to pray I don’t get any injuries because as you get older, things break more easily. 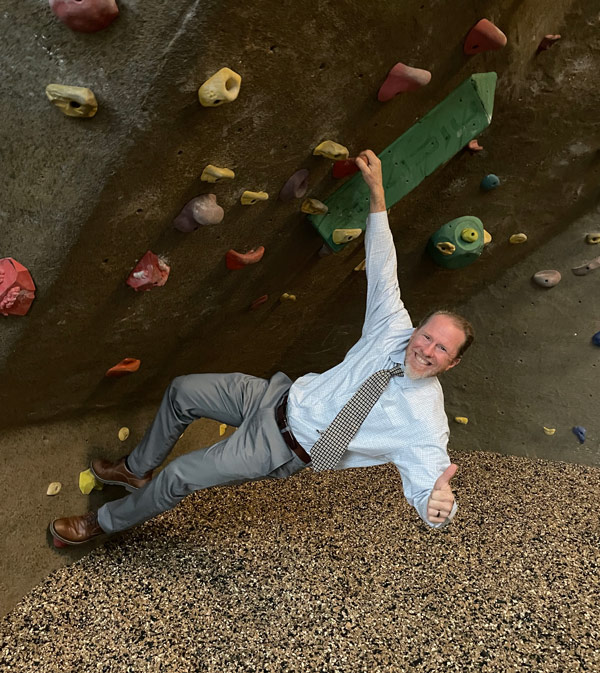 “I look at photos of all the really hard climbs I’ve done and think it’s so cool, but I’m not going to do that again. Both my kids started climbing right away at 5 years old. They climb with me at Life Time gym, where I’ve worked the rock wall for a few years. My daughter is 9 years old now and has really stuck with it. She’s only climbed indoors, but I’m debating on getting her outside on the rock someday. I would love to take her. I’m glad I had all these climbing experiences, and I was able to climb at such a high level. I got to travel the world. As a climber, you get to go to locations that you would never typically experience. You wouldn’t even look for some of these spots unless you were a climber.”

A wrong number is the right connection for Syosset Valentines
Farmingville resident is a construction worker by day, aerialist by night