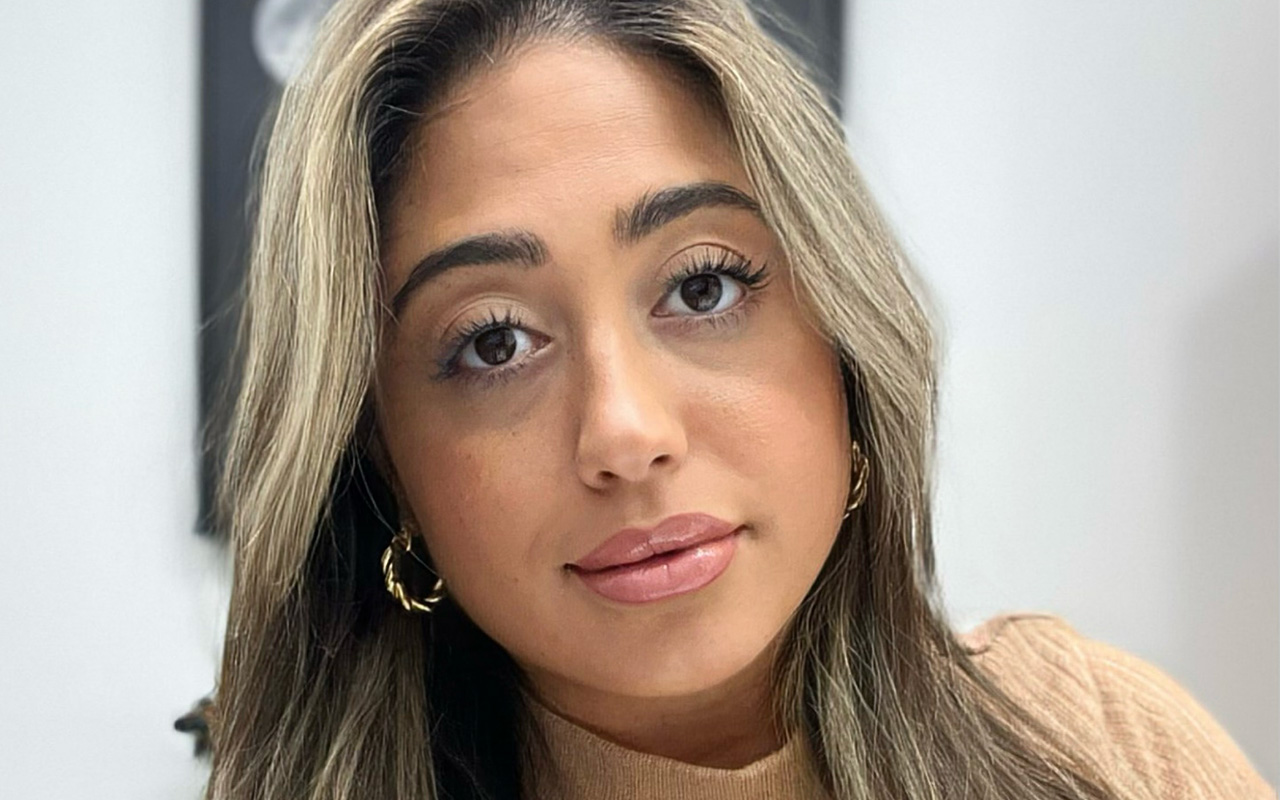 ‘Every day before I left the house, no matter where I had to go, I always gave my dad a kiss goodbye and told him I loved him.’

“My dad calls me in from the living room and says, ‘You need to see this.’ He points to the TV screen of a singer who just got the Golden Buzzer and says, ‘See this kid? You’re gonna marry this kid.’ That ‘kid’ and I are now engaged.

“In 2017, a year after my dad showed me that episode of ‘America’s Got Talent,’ I went to SantaCon with a friend. I wasn’t going to go, but my friend convinced me and I’m so thankful she did. We bumped into that same singer, and he happened to know my friend. She introduced me to Sal, and the first thing I told him was that my dad said I was going to marry him. He made a joke that he should probably take me to dinner first. 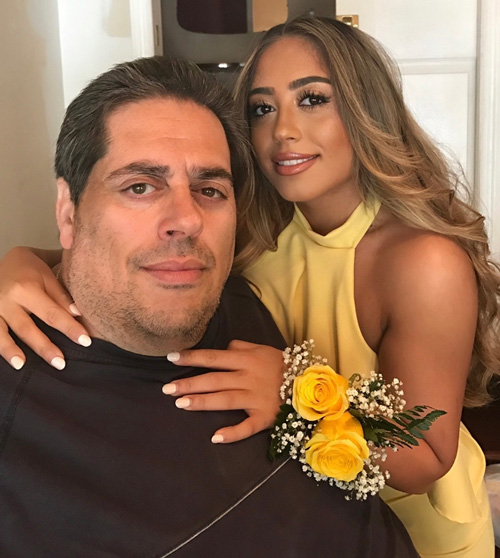 “So, we made plans to get dinner on Tuesday. I went home and immediately told my dad who I ran into. He honestly wasn’t even that surprised. He thought it was meant to be. He was giving himself all the credit, of course.

“Every day before I left the house, no matter where I had to go, I always gave my dad a kiss goodbye and told him I loved him. That was a big thing in our family. You could never go to bed or hang up the phone without saying, ‘I love you,’ because you never knew what tomorrow was going to be like. I really learned this lesson.

‘I don’t know if he knew something, but he turned to me and said, “Maybe it’s better that I’m just watching you walk down the aisle.”’

“I told my dad goodbye, and that I loved him, like usual, and he asked me, ‘What time is this character coming over tonight to pick you up? I want to touch up my hair before I meet him.’ I was so excited for the date, and I even asked my boss to leave early to get ready.

“I got home, and it was about 3:30, and something just felt weird when I walked in the door. I had two German shepherds at the time, and usually they were always at the door when I came home. But on that day, they weren’t. We lived with my mom, aunt and cousins, and so my mom was upstairs with my aunt.

“I went downstairs and walked past my dad’s room. I saw him sleeping on the bed and the dogs were with him. I didn’t want to wake him up until my date arrived, so I went into my room to get ready. 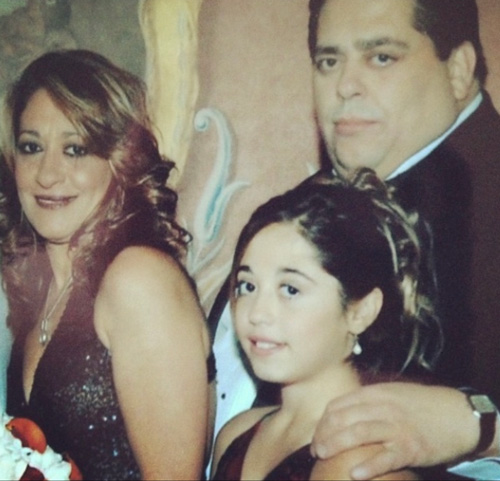 “As I was in my room, I heard a blood-curdling scream from my mom that I don’t think I’ll ever forget. To this today, if I’m in a different room than somebody else, I still get that anxious feeling. My dad passed in his sleep. He was super afraid of death. He was overweight and had an enlarged heart.

“He drove me to work and back every day for two years. Just a week before he passed, we were in the car, and I noticed he was very out of breath. I said to him, ‘Daddy, I want you to walk me down the aisle. I don’t want you to be in a wheelchair.’

“I don’t know if he knew something, but he turned to me and said, ‘Maybe it’s better that I’m just watching you walk down the aisle.’ I went to work and started crying because it hurt. My dad and I were really close – I’m an only child.

“Before he passed, he was hallucinating in his sleep, which we now know is a big part of heart failure. At the time, we didn’t realize it because he always talked in his sleep. We used to take videos because it was funny, so we had no idea that this was any different than his usual sleep. The hallucinations started happening the week before he passed.”

‘He took every emotion, whether it was anger or sadness or happiness, and he stayed with me. And four years later, he proposed on Christmas.’

“When my dad passed, I was trying to get into the room. I was a medical assistant at the time and had a CPR certification. My aunt pushed me to the side and that’s when I knew he was gone.

“My friend was on her way to do my makeup, and I called her screaming to call the cops. I collapsed in the street. It’s a day I really will never ever, ever forget. “My friend called Sal and explained what happened. He didn’t know me at all. We had just met at a random bar, but he sent food to my family’s house that night. He even drove all the way to Lemon Ice King of Corona in Queens to get me a big tub because he knew how much it meant to me.

“My dad was from Corona, Queens, and he was very proud of being from there. He used to drive there every Saturday to bring back tubs of ice for my family. We buried my father two nights before Christmas, and on Christmas Eve, Sal reached out to me. He ended up going to the same midnight Mass as my family. He sat with us and just held my hand. He told me that when he was praying, he told my dad that he promised he’ll take care of me. He wanted to help me through this time. 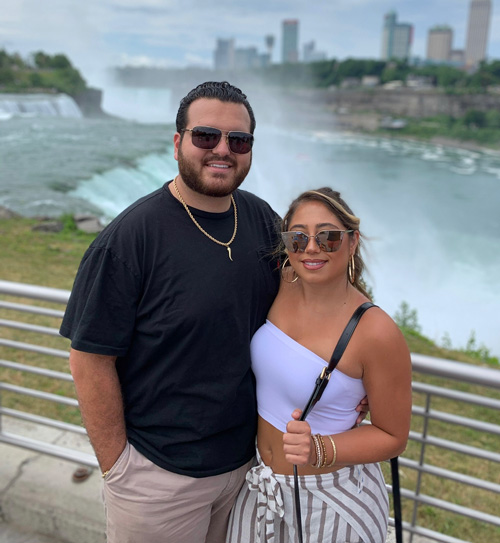 “He was living in Florida at the time and asked me to spend time with him there. I took a leave from work and for two months, I lived with him. It was rough. My emotions were all over the place, but he stood right there.

“He took every emotion, whether it was anger or sadness or happiness, and he stayed with me. And four years later, he proposed on Christmas.

“I’m a big believer in signs, and my dad gives me signs all the time that he’s with me. That’s what gets me through every day. I’m currently planning a wedding, and to think he’s not going to be there breaks my heart, but at the same time, I do know he is watching me and with me more than ever.”

‘I feel a safeness with Sal. He has that same love that my dad always had for me.’

“My dad was a very interesting person. He actually won the lottery years ago. He would always play these certain numbers, and one day, he won. He didn’t even check the ticket until he heard there was a winner in Corona. His life changed at that point.

“He was a big believer in the power of your subconscious mind, so it doesn’t surprise me that he pointed out Sal and said I would marry him. He was spiritual with the mind and believed we have the ability to manifest what we want. He had books on the subconscious mind, and there was one book that was very important to him.

“Every page had notes. One page in particular had something highlighted. It showed how to make the perfect family, and he put a check mark next to it with my photo.

“My dad was a very powerful presence. If he walked into a room, everybody knew him. Tracksuits were my dad’s thing. We buried him in a tracksuit with a cigar in his hand. He was very Italian and very loud. He had slicked back hair and if even a piece was messed up, he had to go home and touch up his hair. 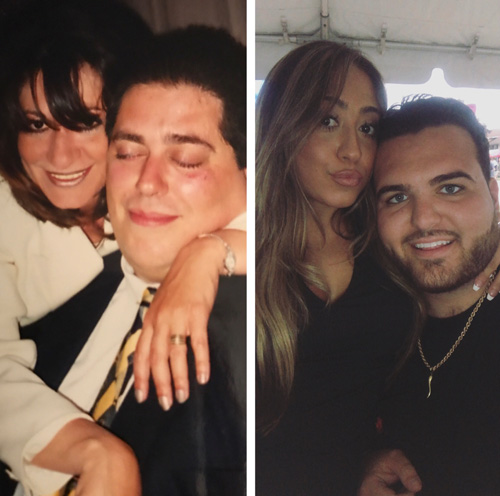 “He was a heavy guy and would always say that God made him heavy because if he was skinny, then everyone’s wives would leave them and marry him. He was very confident.

“We have the same face. He would call me Joey Jr., like his clone. Sal is very similar to my dad, and maybe that’s why I chose him. My dad probably didn’t remember this, but he and Sal met at a cigar lounge. Sal told me that he saw my dad in a tracksuit and glasses and he didn’t know he was my dad at the time, but it’s a comforting feeling knowing they actually did meet.

“They both love cars, both proud Italians, and their personality in general, like their charisma, is the same. My dad must have chosen Sal because even their annoying qualities are the same. I guess he was letting me know that I couldn’t fully escape him.

“If my dad was here, I know him and Sal would be inseparable. I really do. They just have so much in common. I feel a safeness with Sal. He has that same love that my dad always had for me. My dad always treated me like I was the greatest gift on Earth, and Sal does a pretty good job at keeping that up. I guess my dad was right all along.”