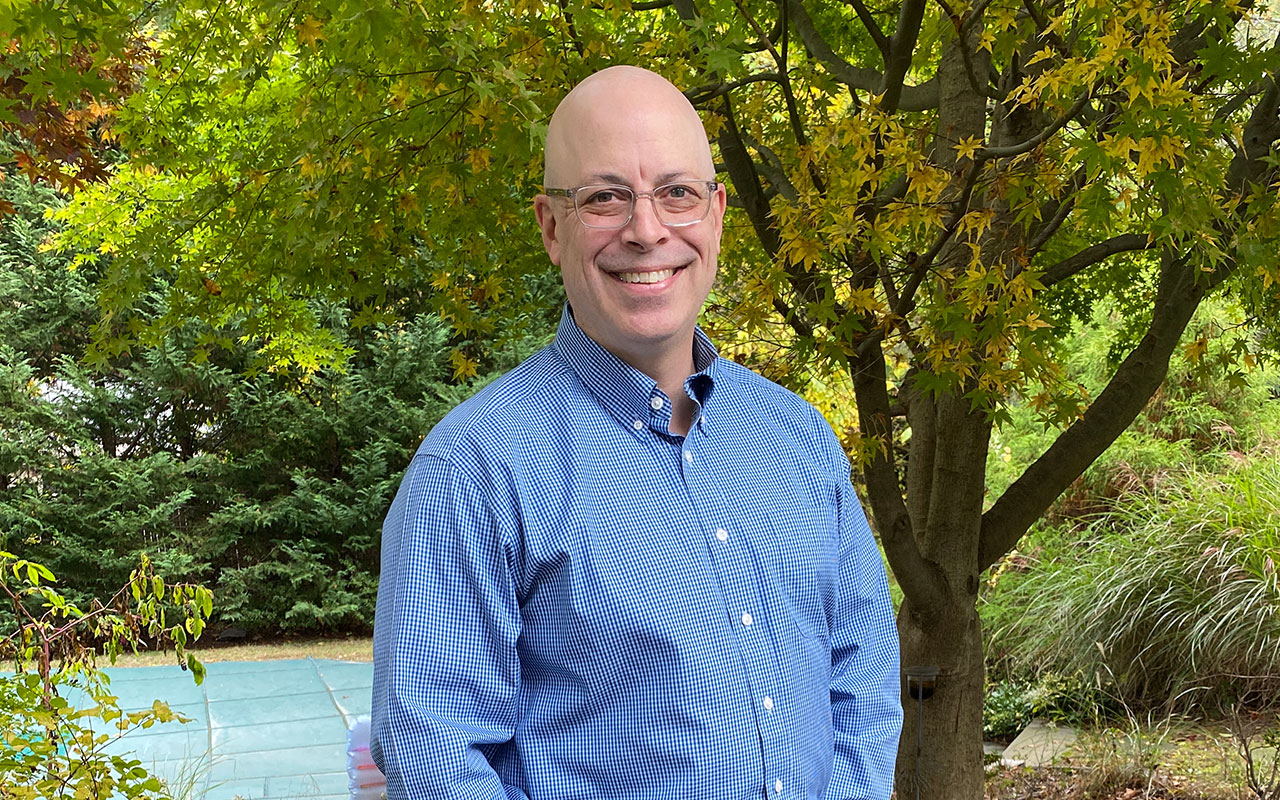 ‘I said to my wife, Cara, somebody better get out of the car and help her or she’s going to get herself killed. And that is honestly the last thing I remember.’

“We were coming back from a party in early December 1996, and at the intersection of Glen Cove Road and Northern Boulevard there was a young woman driving eastbound on Northern Boulevard, and her car had stalled out completely. I remember driving up to the intersection. There were cars zigzagging around her, and it was one of those ‘lovely’ December nights where it’s sleeting, cars are kind of skidding around her, and she’s standing in the road next to the car. And I said to my wife, Cara, ‘Somebody better get out of the car and help her or she’s going to get herself killed.’ And that is honestly the last thing I remember.

“Everything else I’m going to tell you, Cara had to tell me because I don’t remember any of it. We drove through the intersection and pulled into a gas station right there at the corner. I pointed my car’s headlights on the car that was stranded, and told Cara to wait, that I’d be right back. I was getting ready to push the car to the gas station across two lanes of traffic, and a guy who was driving home to Huntington Station never saw me, and I got crushed between the cars and tossed out in the street. I remember waking up in the street for 15 to 30 seconds. I couldn’t control my head, I couldn’t see anything. I was trying to get up, and I asked what happened. I heard Cara say, ‘Don’t move!,’ yelling, ‘Stop moving!,’ and I remember putting my head down on the pavement. And the next thing I remember is waking up in the hospital, probably about 48 hours later. I wake up, and here’s the weird thing, the first thing I said, and I remember this, was, ‘Did they take my leg?’ And Cara said yes. And I said OK and immediately passed out again.

“Filling in the blanks after the fact, Cara told me that I was conscious in the ambulance prior to surgery; I was talking to people. I have no memory of any of it. But the cops were talking to me. They told Cara I kept repeating three things: my name, that I had just passed the New York State bar, that they should take my leg if they had to. So somewhere in my brain I knew that I was probably having my leg amputated, but I don’t have any specific recollection of any of it.”

I can remember sitting in the hospital and asking the doctor when I would be able to walk.

“Compared to most people who are traumatic amputees, I was incredibly lucky. I was discharged from the hospital in a week. I went into Rusk [Institute of Rehabilitation Medicine] for a week in Manhattan, but my goal was to be out before Christmas. My accident was early December, and made it; I was home for Christmas Eve. I was really lucky. The only real lasting injury was the amputation. I had a fractured tibia in my good leg, but I could bear weight on it after a week, so I was able to stand. I had a fractured nose. The big injury they were concerned about initially was I had head trauma. I apparently smacked my head against the back windshield of the car I was pushing, but it resolved without intervention. 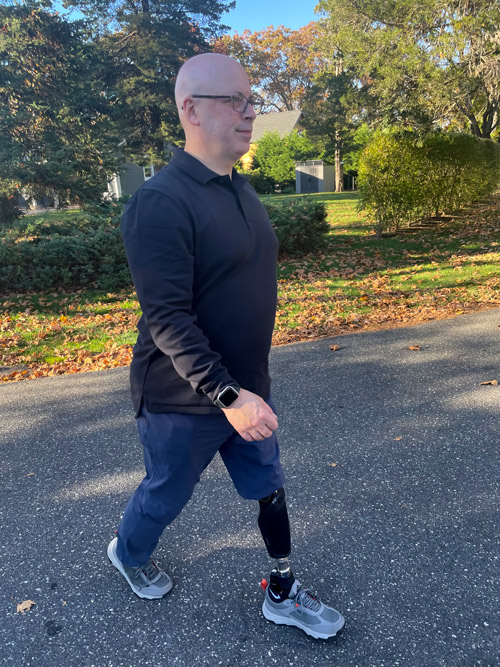 “In Rusk, it was basically learning how to use crutches, how to take care of an amputated limb, while strengthening with cardiovascular rehab. I had staples in my leg and was told you couldn’t get fit for a prosthetic until you get the staples removed, so I spent a month lying around the house trying to stretch and keep my head on straight. I got my prosthesis in February, just over a month after the amputation, and from the minute I got the prosthesis it was, ‘Let’s go.’ I set my whole life around having people give me deadlines and trying to beat them. I can remember sitting in the hospital and asking the doctor when I would be able to walk. The doctor said if everything goes really well, you’ll be able to walk with a cane in around six months. And I remember thinking, when I was a kid, I figured out how to walk in less than a year, so assuming that I’m medically OK, I’m going to figure out how to walk without a cane in less than six months.

“I became intent on trying to blow away deadlines, and my life became very regimented: Set a goal, beat the goal, set the goal. And that’s what my life was after the amputation. As soon as I was walking, well in advance of six months, the next thing was to do a 10K race. Not that I could run it, but I was going to finish. I did that in April, and from there it was right into a full integration of life.”

I also had this new perspective, which was, I can only go on this ride once, the ride of life. I’m not going to spend much time doing things that don’t make me happy or fulfilled.

“Prior to the accident, I’d been working at a law firm in Uniondale waiting to pass the bar; I literally passed two weeks before. I went back after the accident. The firm was great; they took care of me. But I was practicing in an area that I knew I wasn’t likely to spend the rest of my life doing. My boss told me, you should not stay here out of any sense of obligation to us, you’ve got to do what’s right for you. I stayed about a year and a half after I went back to work, but I also had this new perspective, which was, I can only go on this ride once, the ride of life. I’m not going to spend much time doing things that don’t make me happy or fulfilled.

“I thought getting into trial work was where I wanted to go, so I ended up joining a firm in Garden City that did medical malpractice work. I had a great mentor there who taught me a lot. I saw what trial work was like. What I learned from that was I really liked helping people, but I hated everything else about that job, which is inherently adversarial. I don’t love conflict. So, after doing that for a few years, I decided I wanted to get out of law. I wanted to try something different. At the same time, my prosthetist was looking to go out on his own and open a business, and I told him I was going to get out of law, and together we opened a patient care business to provide people with prosthetics. It suited me really well going into a business that was focused on patient care.

“I did that for five years and then wanted something broader in scope, with a bigger impact than one patient at a time. I had the opportunity to go to work for Össur, a global prosthetic company, and joined in September of 2006. My current role is vice president of market access., In its simplest terms, my job is to lead a group that makes sure that patients get exactly the services and products they need exactly when they need them. So, if there’s any insurance barrier or regulatory barrier, or claims-related barrier standing between a patient and a service or products, we’ve got to figure out how to knock that barrier down. It happens increasingly frequently over the last 20 years. The world of regulatory restrictions has gotten much more difficult to navigate.”

I remember sitting there thinking I shouldn’t be here; I should be dead.

“If you’ve been an amputee as long as I’ve been, you get the opportunity to speak with people who are going through the loss, and that is incredibly rewarding. I always tell people that when it happens, it is going to be the defining thing about you; you’re going to think about yourself only as an amputee. I can’t tell you when that will change; for some people it could be weeks, for most it’s months or years. But there comes a day when it’s just another thing in your life, it’s not THE thing.

“The act of putting on a prosthesis every morning is a constant reminder of what you lost. Then, at some point, it’s like you’re putting on your clothes and you’re putting on your leg, that’s all. And you’re off and going. Everyone goes through it in their own way and their own pace. You see these people at the worst time of their lives and they’re just gutted. Most people don’t know many amputees. Most people never met someone with limb loss. It’s a small group of people. I try to help people understand what the possibilities are, what the realities are, and that losing a limb doesn’t mean losing your life. You are going to navigate the world differently. It will probably be more challenging, but it won’t limit your ability to function, be active and have a great life. It’s a huge responsibility, but one of the most gratifying things you can do.

“On the first anniversary of my accident, I drove from my office to Jones Beach. It was a frigid December day, but it was crystal clear. And I remember sitting there thinking I shouldn’t be here; I should be dead. There’s no way I should have walked away from what I walked away from. That night when I was driving home, when I was stuck in traffic, the thought hit me: If I could have my leg back, but I would lose everything that I’d learned about myself, about my family, about my friends, about what was important to me, I wouldn’t take the leg back. That is a sentiment that I’ve shared, and most people who are able-bodied say that’s kind of crazy. But when you say that to other amputees, so many of them get it. I feel like I got 50 years of life experience compressed into 12 months.”