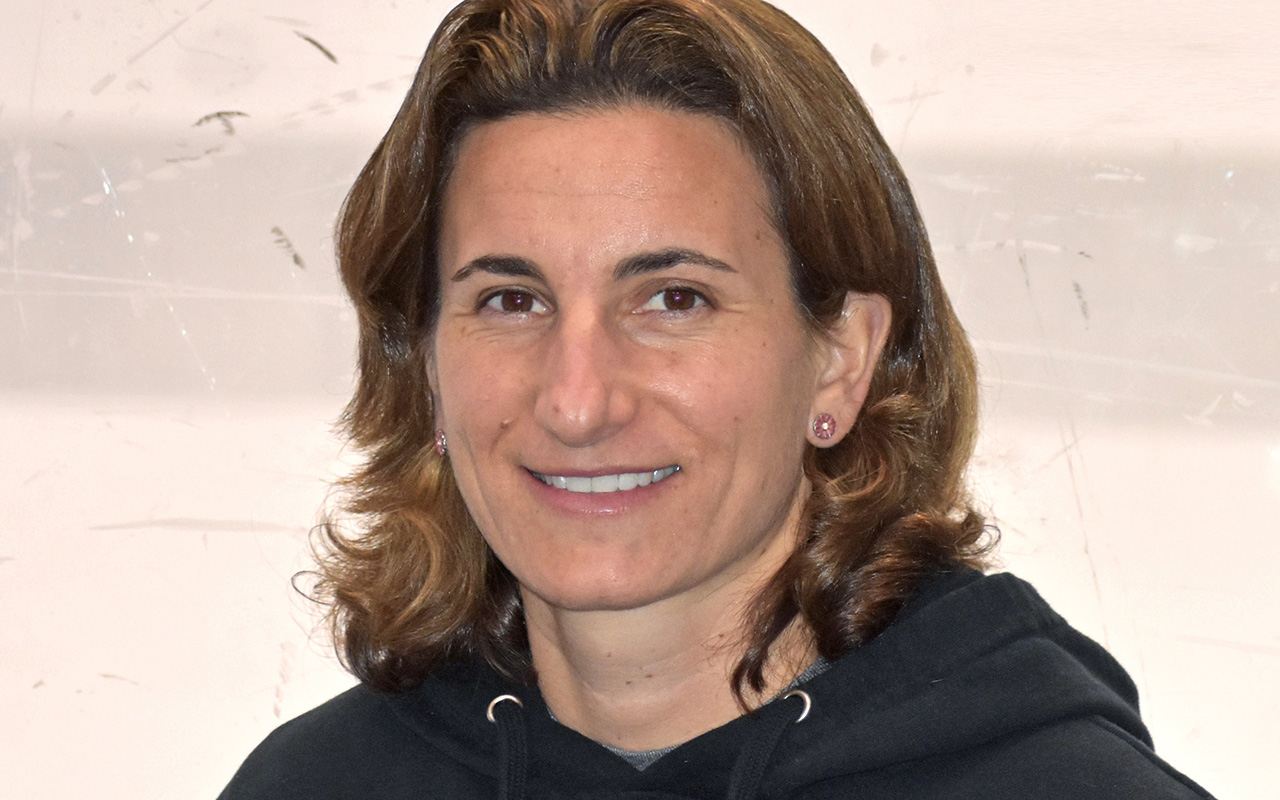 “There weren’t many options on the Island for girls to play hockey when I got into it at age 12. There wasn’t one singular thing that made me want to play, just a general appeal. I was at a rink and saw the Islanders on TV, but really, I just slowly got attracted to hockey and wanted to get into it.

“I started with a girls program at a private club in Locust Valley, and it had one of only two girls teams on the Island, plus a travel team. I couldn’t skate very well in the beginning; I remember not being able to go backwards at one of my first practices. I remember being at a public session, and I would watch the boys skate, then go off in a corner and try to replicate what they were doing.

“There was a lot of self-teaching, and a lot of that first year I was on my own. At first, it was disbelief I was a hockey player. I remember comments from parents like, ‘You’re carrying your brother’s bag,’ and I’d say, ‘No, I don’t have a brother, and this is my bag, and I’m a hockey player.’ We’d have a game somewhere, and when I needed a place to change, they’d say, ‘We don’t have that. Isn’t this a boys team?’

“There was a general feeling that girls don’t play hockey. Even on my own team, where I was generally accepted, the definition of acceptance was just tolerance, not, ‘You’re a part of the group,’ but, ‘We’ll just let you be here.’ I dealt with it. I think the lack of acceptance translated into determination for me.

“My first coach said that although I was naturally athletic, as I also played soccer and lacrosse, that while I was picking up hockey, I needed some professional coaching. I started working with private coach Dan Bedard, who was a key factor in keeping me in the game when things got difficult.

“He never treated me differently. It wasn’t, ‘I’m going to push you extra hard because you’re a girl,’ but, ‘You’re a hockey player, you’re in front of me and you’re here to learn.’ His main goal was to translate the love that he had for the game on to me.

“Certainly, there were times I was upset about something or struggling, and he would give a pep talk like, ‘You can’t let the boys win; you can’t let these parents win. You’ve got to just keep going, just do your thing.’

“When I went to prep school, they had an all-boys team, and I was the first girl hockey player in school history. This was a much more serious level of play. I was a 15-year-old girl playing with boys ages 17 to 18.

“There are major physical differences. They were all high-level players. Some were the sons of professional hockey players. Some even went on to play as pros. There were games where I had to sit out because it was too dangerous, and there were a lot of games where I got concussions.

“I remember times I’d get squished and really hurt. He [coach Dan Bedard] would say there was no excuse. The term he used was, ‘If you can’t run with the big dogs, stay tied to the porch.’ That was his attitude: ‘At this point you have no choice, so just keep going.’

“He instilled his love for hockey in me, which outweighed any fear I had. I started working with another private coach, Ron Winicki, who’s now my physical therapist. He was even more intense, and there were no excuses with him. 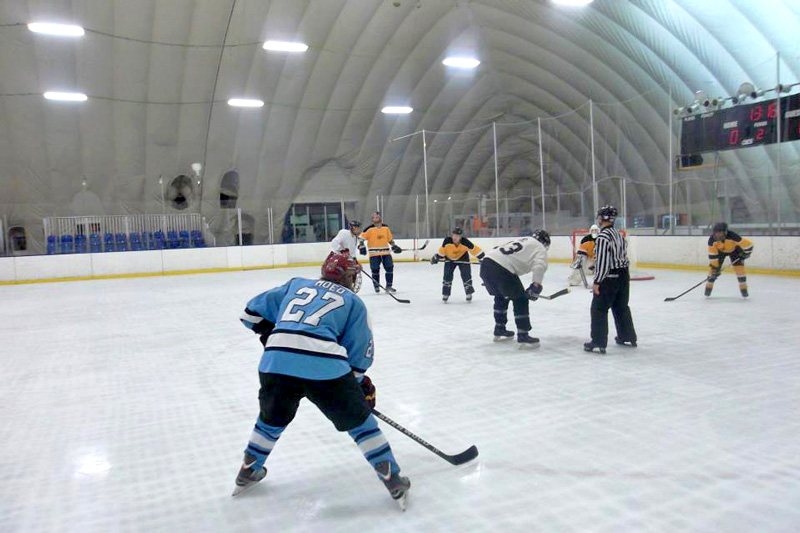 “After graduating college, while there were opportunities to play hockey in Europe, there wasn’t anything that was going to financially support me. Dan said, ‘There’s always going to be hockey; I just have to find it.’ I came home and played in a mens league while working in advertising. I hated it.

“Dan was coaching a boys team, but had a girl goalie, and he asked me to come down and shoot on her just so she can see another woman on the ice. Soon I was helping coach a team, not getting paid, just as a volunteer.

“One of my old coaches eventually asked me to coach a boys team with him. I started coaching boys in my early 20s, and they were great about it. It was nice to see that the next generation was much better than what I had grown up with.

“For the girl players, I was still afraid they might relive what I had gone through, which inspired my campaign for a girls organization. The problem was to start a new league. I needed a charter and could only get that if all the other area organizations approved, which they didn’t. I imagine the reason why being that would just create more competition to fill their rosters.

Anytime some guy would say something terrible to me, or some dad would give me an attitude, I could always look back at these two other guys and realize they’re not all like that.

“After failing to get support from other organizations to start a girls league, I got my first full-time hockey director job at a rink after leaving advertising. I was able to use that rink’s existing charter to start a girls program there. I then moved to Twin Rinks in East Meadow, which ended up being taken over by the Islanders organization and is now known as the Northwell Health Ice Center.

“I had been working on forming a girls team there, too, when the Islanders general manager asked, ‘Why does this facility not have girls hockey?’ I basically went over the entire history of girls hockey on Long Island with him. He said, you don’t need to fight anymore; go and start a program.’ That’s when the New York Islanders Girls Elite Hockey program started, and I became founder and president.

“We started with two small teams in 2016 and 25 girls, but now we currently have over 100 girls across six teams, a developmental program and a spring program. Since 2016, the program has grown into a complete girls organization with teams from 10 and under through 19 and under. 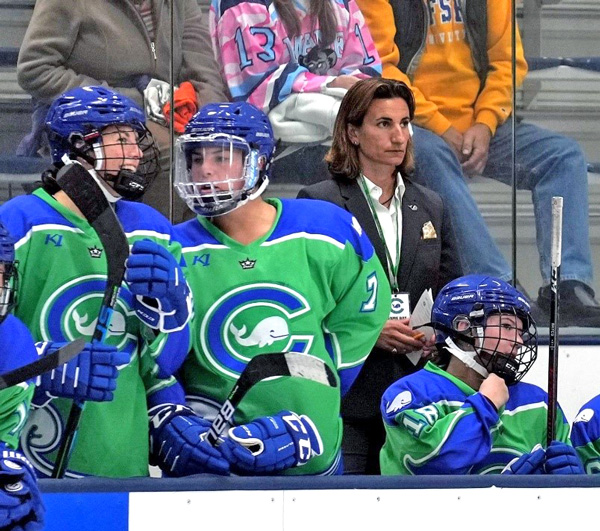 “I’ve since become the GM of the Connecticut Whale professional women’s ice hockey team, but still coach two Elite teams. I’m split between Dan and Ron when it comes to how I coach. Ron [Winicki] still puts me back together when I end up back in physical therapy, and I stick by his no-excuses approach.

“As for Dan [Bedard], when things get difficult, I think of him saying, ‘Keep skating on. Keep doing what you believe in.’ So, now that is in my head, and I’m trying to pass that on to the girls. I want them to love hockey and to stay in it, in any form.

“Girls and women in the game talk about how important it is to have women in the sport to look at for inspiration and support. I think that’s 100 percent true. Looking back, I was able to turn to two men who were completely different to say, ‘Hey, look who’s on the ice; look how great she’s doing.’ They were helping me change attitudes.

“Being a female hockey player, I had a different situation than other people, and part of their coaching was to help navigate that situation. They looked at me and said, ‘We’re going to get you through it, but not let it define you. It doesn’t matter, just keep pushing.’”