‘Some of the stuff that I saw I’ll never forget and I’ll never share it.’

“My mother and father were always for me being a firefighter, even though other people told me you have to be some kind of crazy to go into a burning building when everybody else is running out. I grew up in Hempstead in a family that’s all about serving the community. My father was a Hempstead auxiliary police officer. I always saw him giving back to the community. I thought at one time about becoming a police officer. I took the police exam, but they never called. I also took the test for corrections officer, but that didn’t work out either. I took those as signs that maybe that wasn’t my path.

“One day in the late 1990s when I was working for the Village of Hempstead, I was having a conversation with the Hempstead police chief, and I told him how I always wanted to join the Hempstead Fire Department. He said, ‘Are you serious?’ I said, ‘Yes sir,’ and he drove me to the fire department. They asked me a few questions, but they knew my father and they knew my family, and the rest is history.

“I became a firefighter in 1997 and six years later got to the rank of captain. We’ve had our share of bad fires. We’ve had guys that have gotten hurt, but none of our guys have passed away since I’ve been at a fire. I’ve been through a lot of things myself. One day I was on the second floor inside a house on fire. I had thrown a mattress that was on fire out the window, and then I picked up the box spring, which was also on fire, and threw it out the same window. The box spring hooked onto my bunker coat, and I went out the window with it. One of the firefighters working with me in the room grabbed my boot, and another gave me a hook to get the box spring off me. Then they pulled me back in. I poked my head out the window, one of the guys on the ground threw my helmet up to me, and I just kept going. What I didn’t know at the time was that my mother was in the crowd watching from the street.

“At dinner that night my mother said, ‘Can you believe it — today I saw a guy hanging out a window!’ My father and siblings already knew that was me, but I hadn’t told my mother. Everybody at the table looked at me. My mother looked at me, put her knife and fork down, and said, raising her voice just a little: ‘Don’t tell me that was you!’

I never imagined our fire department would be going to Ground Zero, but we actually got the call to respond the next day.

“I was at the Chevy dealer in Hempstead purchasing a new vehicle on the morning of 9/11 when the first plane went into the tower. Everybody in the dealership was running toward a television set in the manager’s office. After the second plane hit, we knew that it wasn’t a plane flying too low; we were being attacked.

“At the time, I was a lieutenant in the Hempstead Fire Department South Side Hose Company No. 2. I went to the firehouse and everybody’s watching TV in disbelief. I never imagined our fire department would be going to Ground Zero, but we actually got the call to respond the next day. We took a couple of our trucks with a military escort into the city. We were working with the FDNY, the NYPD and a cadaver dog to look for survivors and body parts in the pit where the World Trade Center had been. You’re down there with a lot of twisted metal, debris, body parts. It was so hot, you couldn’t wear the mask you were given, so you were inhaling the smoke and toxins that were in the air. It was so hot we couldn’t wear out bunker jackets, we only wore bunker pants with a shirt and our gloves. 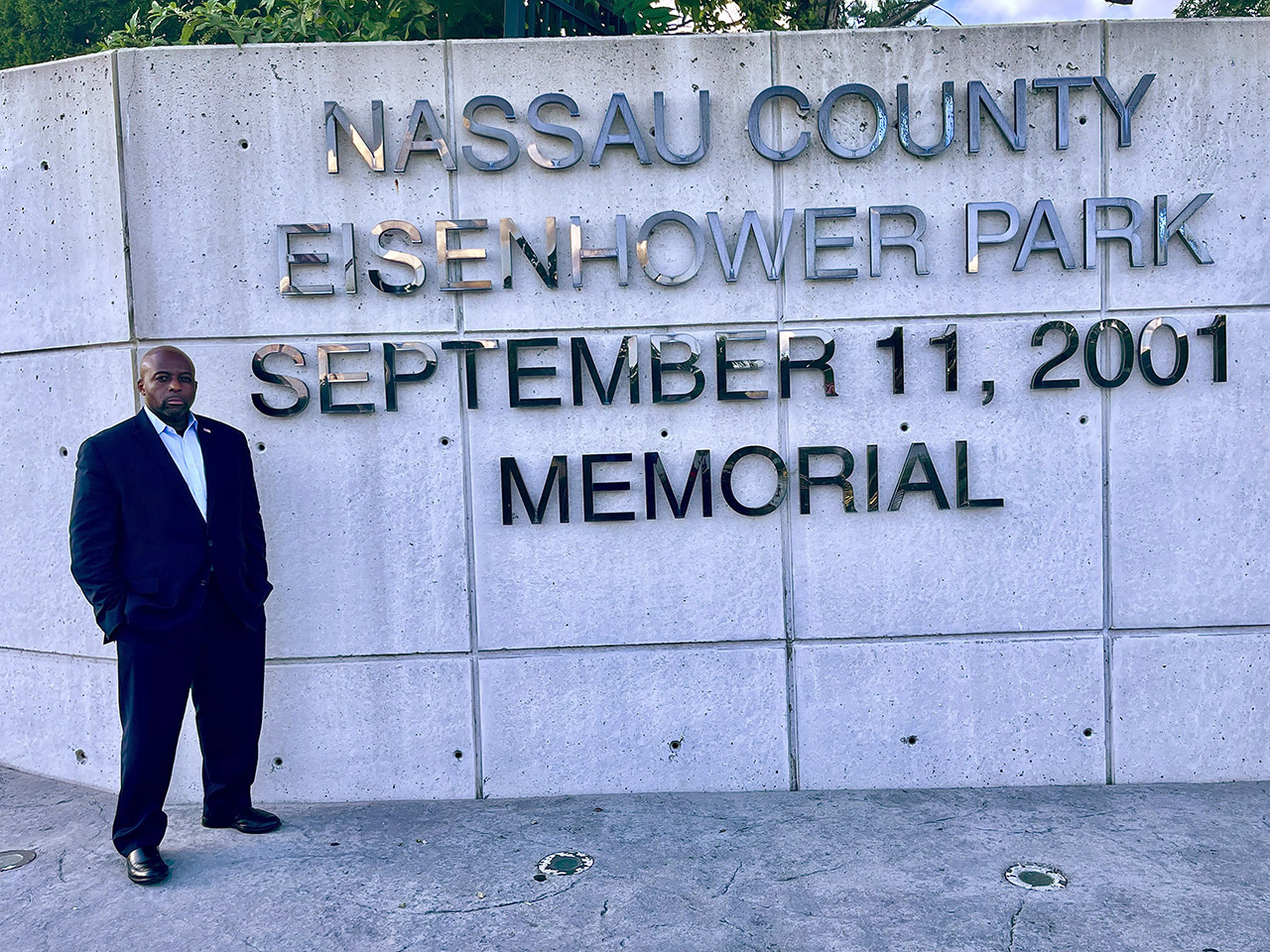 “Seeing what you saw on TV, and being there, were two different things. There was a stench that you couldn’t forget, of jet fuel and everything still burning around you; people walking around covered from head to toe in soot. We were looking for human remains, for people who were trapped. Body parts we found; survivors, no.

“Some of the stuff that I saw I’ll never forget and I’ll never share it. Putting body parts in buckets or things you came across so people could be identified — that’s nothing that we get trained for in the fire service. We didn’t know it at the time, but two of our Hempstead volunteers who were also FDNY had passed away. They found one in a stairwell — his body was still intact —and there was another gentleman they never found, Mike, he was a good dude. We had no clue they had passed away. We knew they were probably there, but we thought they were doing what we were doing. Six days later, I went back to the dealer and got a Ford Explorer. They knew where I’d been. The manager came out and shook my hand and thanked me for my service. The car was still waiting there. The owner of the dealership even cut me a break on the price.

Over the radio they told us to find an air pocket and stay put, and they would be looking to hopefully pull us up, and at that time I didn’t think that was ever going to happen.

“On Sept. 12, 2001, I was with my fellow Hempstead Fire Department firefighters looking for body parts about 60 feet down in the pit where the World Trade Center had been, when Tower 7 went down. It sounded like a bomb went off. Everything went dark. The ropes we’d rappelled in on went from very taut to very loose. The people that had been controlling them had to run. I was in the pit along with a Hempstead fire captain, who many years later became a chief. The chief who was outside of the pit was screaming over the radio trying to find out where our guys were. There was actually a fire going on in Hempstead at the time, and the dispatcher made everybody in Hempstead go quiet so she could hear us at Ground Zero.

“Over the radio they told us to find an air pocket and stay put, and they would be looking to hopefully pull us up, and at that time I didn’t think that was ever going to happen. I said a prayer for everybody that was down there with me and I prayed to see my family and prayed to God to hopefully see my daughter and be able to kiss her again.

“My cell phone was in my pocket, but down there in that pit, I didn’t think of grabbing it. I don’t exactly remember how long it took to get the “all clear” and pull us back up, but it felt like an eternity. When we got out of the pit, I literally got on my knees and said, ‘Thank you, Jesus!’ The sun was sill shining. I remember them giving us McDonald’s and peanut butter and jelly sandwiches. When I got home, the first person that greeted me at the door was my mother. She was so happy to see me. I just took off my stuff at the front door, that’s how dirty I was. My mother washed my clothes, but to find out that all the stuff I was covered in was asbestos — that was a little unnerving. I never had asthma issues until after 9/11, and as far as any other health-related issues, I have none that I can say are 9/11-related, so I’ve been lucky in that sense.