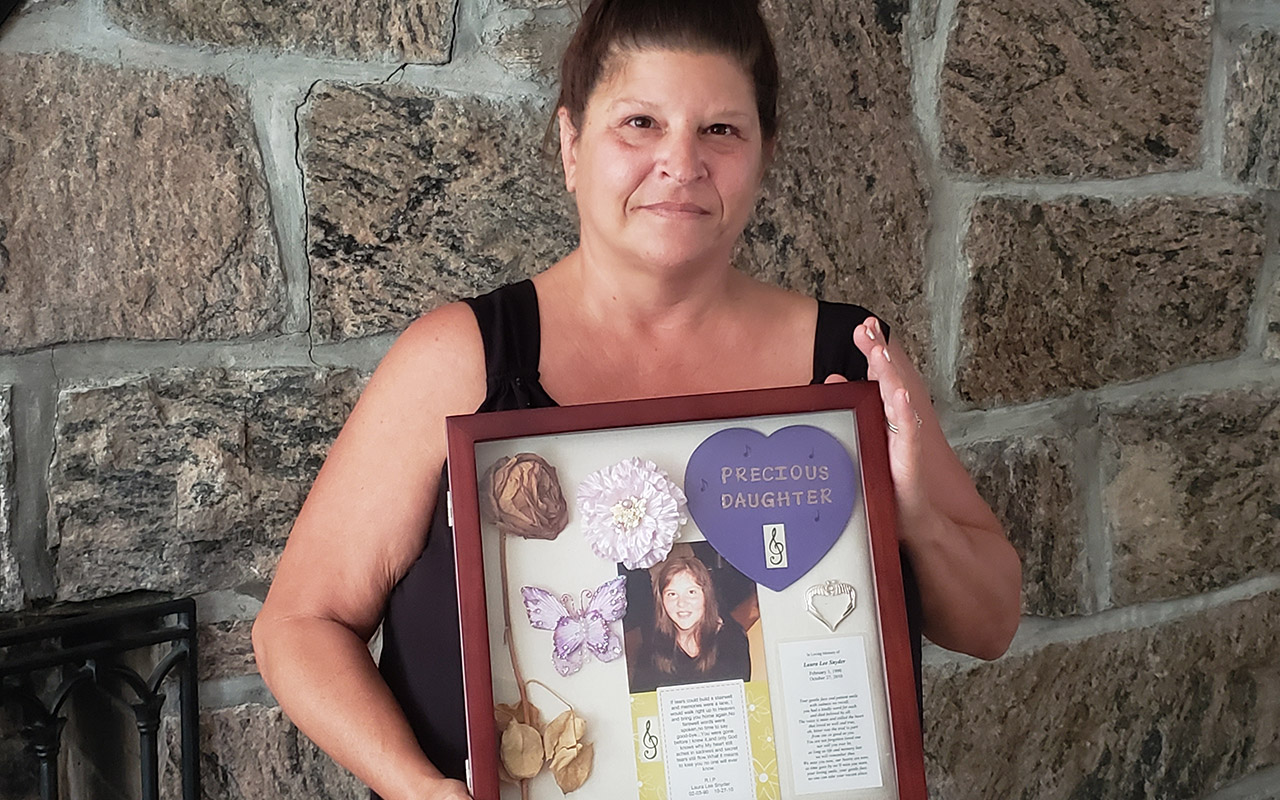 ‘One of the things I always say to people is you can never make a person sadder than the day that they were notified that their child died. Ever.’

“On the morning I lost my 20-year-old daughter, Laura Lee Snyder, to suicide by train, Oct. 27, 2010, everyone in the house woke up at 4:50. I looked in the bedroom that two of my sons shared and they were awake. Then I went to the room Laura shared with her sister. She wasn’t there but her sister was awake, and I thought she had left for school. I heard sirens in the background but didn’t think much of it and went back to bed. When I got everybody up for school, I noticed Laura had left her books, iPod and some papers in a pile. I put it on her bed and sent my kids off at 7:40.

“At 7:50, two men from the railroad knocked on the door and told me she’d been hit by a train and passed. I didn’t understand she had done it on purpose. Strangely, the time we all woke up was the time of her death. The sirens I heard were people attending to her. I found out from the funeral parlor that she laid prone on the tracks.

“We were completely blindsided. We loved her for who she was, a little quirky. She was a gentle kid. In her note to us, she said she didn’t fit into this world. That she’d been battling a mental illness since she was a child and couldn’t deal with it anymore. We’ve since learned that for someone dealing with mental illness it’s mentally exhausting to keep this mask on all the time, trying to `fit into’ the world. None of them want to die; they just want their pain to end. But she was carrying that around for so long.

“She had planned this for eight months. A week before she had started cleaning her room out, which I was so happy about. We later found out the only thing she left was an outfit she wanted to be laid out in, which she had shown me the week before and asked me if I liked it. Now I see the signs as clear as day, but then I didn’t.

“After the funeral, a strange thing started happening. I got messages from people all over the country about, `I think my son is suicidal’ or `my neighbor’s daughter just committed suicide, can they call you?’ I was working with the Joe’s Project with the Family Service League. I sat at wakes for children that I didn’t know to be a source of support for the parents. I don’t want them to feel like they’re alone.”

“It would’ve have been nice to have somebody there with me at Laura’s funeral because nobody really understands what you’re experiencing. A child’s death by suicide is a parent’s worst nightmare because you go through a lot of second guessing your entire parenthood with that child and there’s a lot of regret and guilt. Suicide is unlike another death. There’s no closure. You’re in a group where you’re all floundering and there’s a lot of should have, could have, would haves. We started to raise money through Laura’s Voice to donate anonymously to help others bury their child. I still get phone calls from all over the country.

“Laura’s suicide completely changed me. I think I’m a better parent than I was back then. I don’t think I was a bad parent, but it sure puts your life into perspective. As her mom, I don’t know why she never said anything to me. I don’t know why she never asked for help. I have no idea. I wish she did. And I wish I didn’t chalk everything up to being a kid. I want all parents to know the signs.

“If a parent has a gut feeling that something is wrong, something is wrong. It’s not normal for them to be in their rooms all day. If you think your kid should be in therapy and it makes them angry with you, bring them to therapy; they’ll get over it. I also don’t believe in privacy with teenagers. Parents need to dig a little. My kid Googled everything she did. I did not know that checking her history was even an option.

“The trauma of her passing brought out a multitude of illnesses. I was diagnosed with primary progressive multiple sclerosis, type 2 diabetes, hypothyroidism, fibromyalgia, IBD and recurring pneumonia. All of our children rebounded. They’re all doing really well. You don’t get over it; you learn how to deal with it.

“I’ve also done a lot of lectures and one of the things I always say to people is you can never make a person sadder than the day that they were notified that their child died. Ever. If you want to talk to them about their daughter or son, they would love it because that means you didn’t forget them. Bringing up a child that has passed on will never make a parent sadder. It’s impossible for it to happen. So, we talk about Laura all the time.”