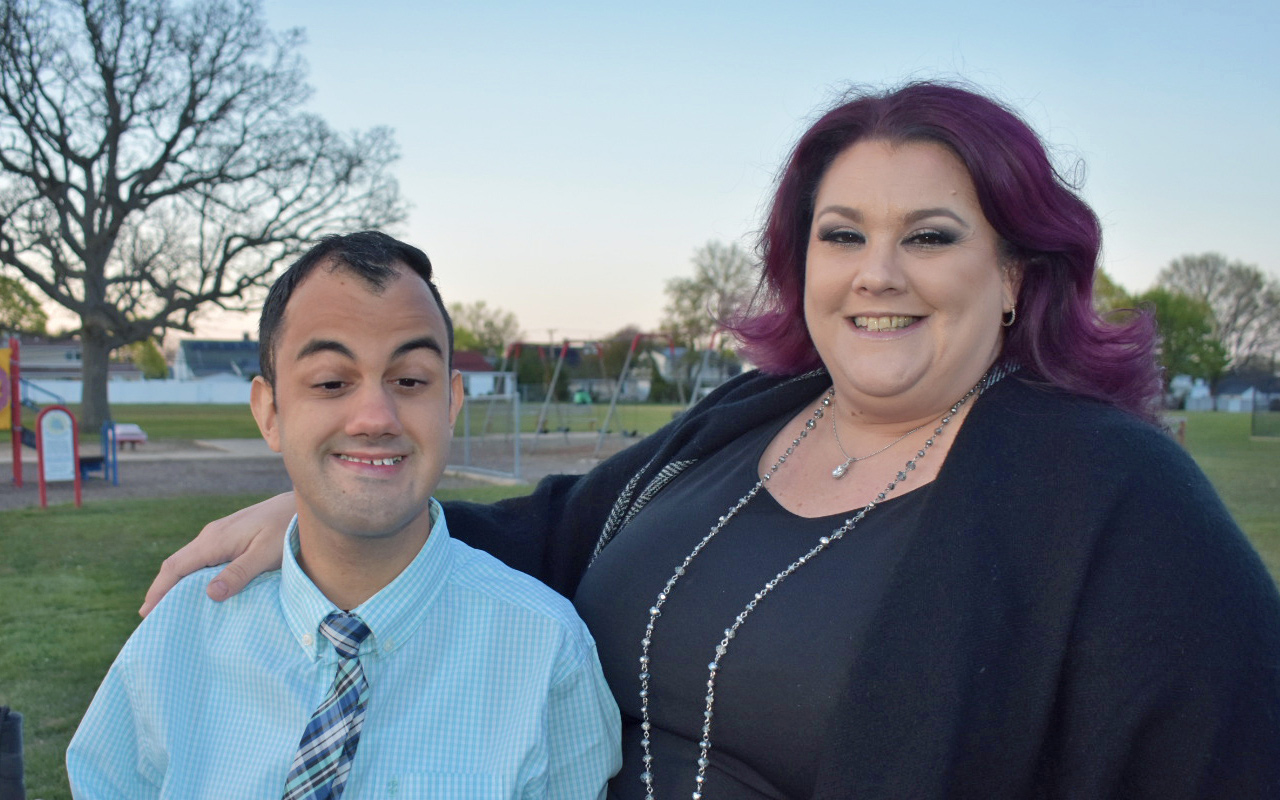 ‘As he got older, I just wanted to give him experiences. I’m not that mom who’s going to coddle him and say, “Oh, he can’t do that, he can’t see.”’

“My son, Anthony, turns 20 in July and is totally blind due to a disorder called osteopetrosis. I thought I was having a perfect pregnancy, and he wasn’t diagnosed immediately after birth. A couple of months later, I noticed something was off. When I realized what was happening, I felt robbed. I felt like, ‘What did I do to deserve this? What did my kid do to deserve this?’

“I couldn’t look at pregnant women, I couldn’t go to a baby store, I had a hard time with it. He was born without osteoclasts, which break down bone to allow for new bone development while growing. Since he didn’t have that, his bones were growing on top of one another. Because of this, all the spaces in the body become solid. Bone marrow spaces where stem cells are made become closed off; it’s usually a fatal disease if untreated. Nasal passages and optic canals become small, pinching the optic nerve, which leaves a lot of these kids blind. Without a stem cell transplant, survival is unlikely. At 5 months old, he received a week of chemo to give the stem cells a fighting chance. Then it became a waiting game. He ended up having roughly 150 blood and platelet transfusions at 5-6 months old, after having a craniotomy at 4 months old. Seven days into the chemo, he was put on a ventilator, which was how he spent his first Christmas. It was awful. 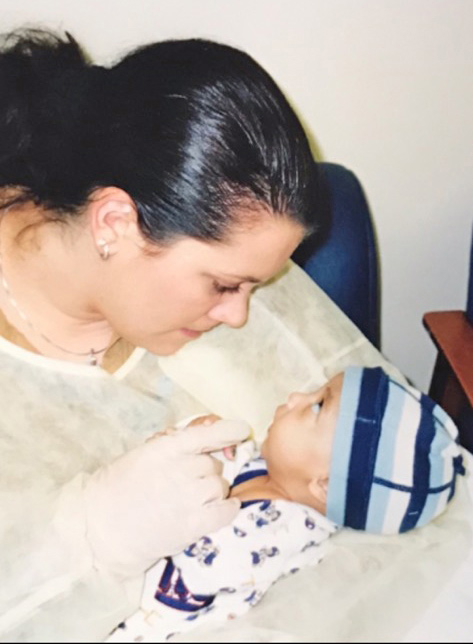 “He came off the ventilator on New Year’s Eve and was doing well. He was discharged on Jan. 31, 2003, after three months in the hospital. He then went on round-the-clock meds, and I needed to care for his feeding tube. Life at home involved therapies, seeing lots of therapists, but he came off all his meds just before age 2. The next step was working on his feeding. He had a wonderful feeding therapist who worked with him for eight years; she was my Anne Sullivan, my miracle worker, who taught Anthony how to feel hungry. As he got older, I just wanted to give him experiences. I’m not that mom who’s going to coddle him and say, ‘Oh, he can’t do that, he can’t see.’ For me, I had to learn how to be the parent of a normal kid. The first few years of his life was about trying to keep him healthy, but then we just introduced him to normal things.”

When it happened, it hit me, he’s come so far; my kid is playing onstage. There was a time he was not expected to even be here.

“When they told me my son was blind, back when he was 3-4 months old, I said, ‘I’m not going to treat him like he’s disabled, and he’s going to experience everything he can.’ I started thinking of different ways how to do that, and I noticed he likes toys where you’d push a button and it’d make a noise, so I’d buy him those toys. I bought him bilingual toys, too, and he would master those toys. It was incredible. His sighted relatives couldn’t figure these toys out like he did, so from early on I knew music would be his thing. 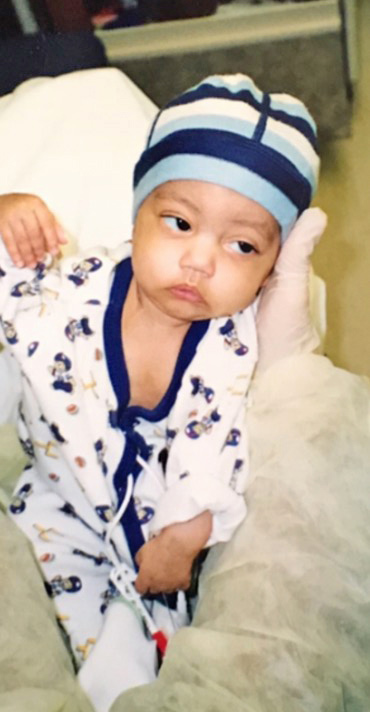 “Today, he can speak several languages, and he started playing piano, for which he has a gift. He’s got perfect pitch and can play anything. He actually played onstage with singer Gavin DeGraw at The Paramount when he was about 11. At one point during the show, I told Anthony to come up to the stage and put your hand up, hoping Gavin would give him a high-five. He did, but when he tried to wave to Anthony, Gavin realized he couldn’t see, and came back. He started asking Anthony questions and was holding his hand, but when Gavin started to walk away, Anthony wouldn’t let go. Apparently, Anthony told Gavin he plays piano, so Gavin asked security to bring him onstage! I’m thinking, ‘Oh God, what is Anthony going to do up there?’ But once on the stage, he played a piece he played with the New York State School Music Association as a warm-up. The crowd started getting into it, and then Anthony started to play Gavin DeGraw’s ‘Not Over You,’ and the crowd went crazy! The band didn’t even get to that song yet, but they started playing it, and then Gavin starts singing it. It was such an incredible, unplanned experience. It was priceless. When it happened, it hit me — he’s come so far; my kid is playing onstage. There was a time he was not expected to even be here.”

I never thought I’d say any of this, but he is who he is today because he can’t see.

“The fact that he is graduating high school is a milestone for someone with osteopetrosis. Back when he was diagnosed in 2002, all I could find on the internet at that time was that this was a fatal diagnosis. Everybody always says, ‘Pat yourself on the back,’ but I don’t feel that way. Anthony always had a great disposition, and he has an excellent hands-on dad. I wanted to make sure that my son was a good and decent human being, but I feel like he just turned out that way. I don’t know if I can take credit for that. He’s just a happy kid all the time.

“Sometimes, I’m like, ‘Look how far we’ve come,’ because he changed my life too. He caused me to change my career path. I was working in the hair field and had a real fear of needles, but because of everything Anthony went through as a baby, I realized I had to buckle down and overcome that fear. I became a blood donor after seeing all of Anthony’s transfusions, so I could give back —and I’m a hospital phlebotomist now. He’s taught me so many things that I wouldn’t have known prior to having a child, let alone a child who can’t see. 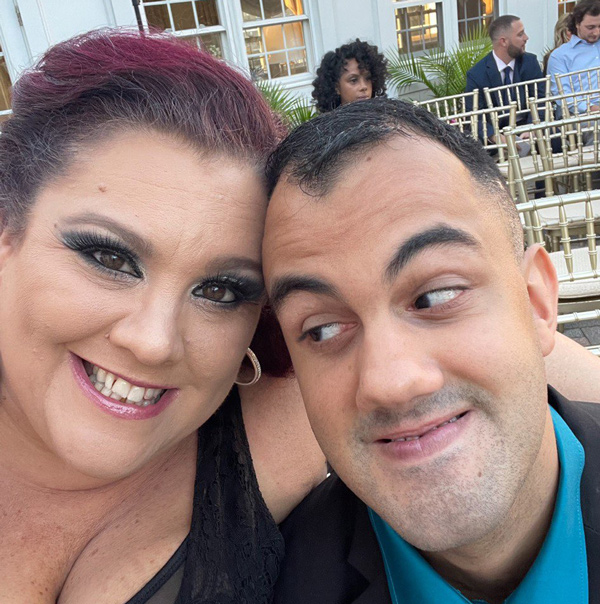 “Looking back, upon hearing he was blind, I felt like that was more traumatizing than anything else, but in hindsight, I feel his vision impairment is actually his gift. When I started to see his strengths, it didn’t really bother me anymore that other kids could see and mine couldn’t. I got over that. I could have been that parent who said, ‘Oh, no, Anthony, you couldn’t do that, you’re blind,’ but I’m not. I never thought I’d say any of this, but he is who he is today because he can’t see. He has a whole different perspective of life than the average person. I’m not the ‘Face of Long Island,’ he’s the one who’s been through hell and back. He has persevered, not letting his vision impairment stop him. I’m just his mom.”