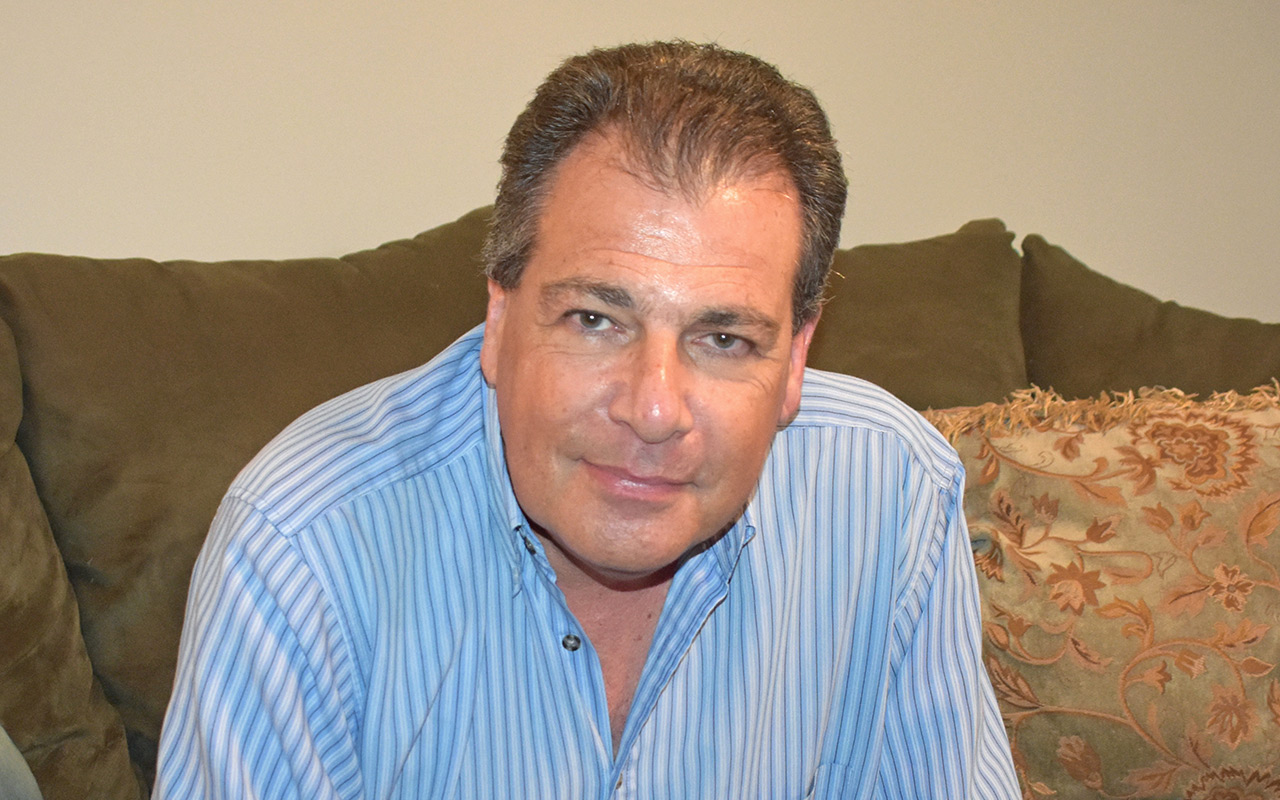 ‘There’s a stigma sometimes associated with stuttering, that stutterers aren’t too bright, or they’re nervous, or there’s something wrong psychologically.’

“I have always stuttered, even as a small child. I was teased in grade school. They would imitate me and make fun of the way I spoke. It was a challenge getting through high school and things like dating and socializing, and it caused me to be withdrawn and shy.

“There’s a stigma sometimes associated with stuttering, that stutterers aren’t too bright, or they’re nervous, or there’s something wrong psychologically. But it’s neurologic, and we don’t really know what causes it. The stutter creates stress, and then just the anticipation of stuttering makes it even worse; it’s an endless loop. I moved out to L.I. from the Bronx for graduate school. I now live in Medford, but have also lived in Patchogue and Bellport. 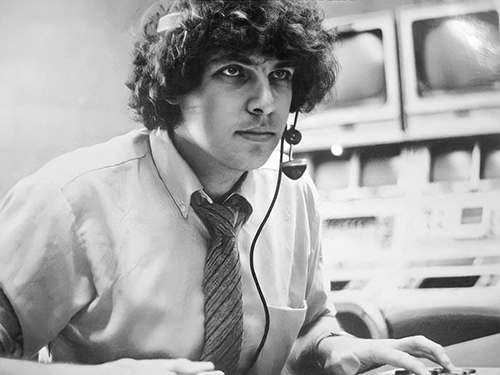 “I always wanted to be that person who was fluent and could communicate well, so I would put myself into tough situations. For example, while in graduate school, I was teaching television production courses and given class assignments to teach. I didn’t quite have a handle on my stuttering at the time, so it was a little bit rough speaking to groups of students not much younger than me.

“I remember one former student once told me, ‘I felt so bad for you, I just wanted you to get those words out, and we were rooting for you.’ That was very sweet, and while it clearly was difficult for me, I did it because I didn’t want it to hold me back. I went to a speech therapist in my 20s, and she said if I decreased my rate of speaking by 20%, I would decrease my stuttering by 50 percent, and she was right, but what really helped me get it most was hypnosis.

“I was seeing a psychotherapist after my first marriage ended. I was going through stress and other things, and I was dealing fairly well, but the therapist said I should also deal with the stutter. I would say that of all the speech therapies I tried, that was the one that helped most significantly. He would put me under in the office, and we would talk specifically about words and sounds that I would have difficulty saying, or would be triggers, and he would have me imagine talking to other people, saying those words. He also made recordings for me, and I would do self-hypnosis at home, and for whatever reason it worked for me.”

That was a large growth spurt for me, as self-teaching myself to be a public speaker and learning how to engage a group of people also served as the thing that made me want to try stand-up comedy.

“Words I had a hard time with were ‘women’ and ‘money,’ and I would joke about how those were things that cause some anxiety as well, which didn’t help my stuttering. But while his methods work for me, you’re never cured of it; you just find ways to cope and control it.

“One of my past government jobs was working with Mario Cuomo as his representative on Long Island. He was a master communicator, a master articulator and so eloquent. I learned so much from him. I later worked for the Department of Labor for about five years, right after the Great Recession, and I had to do lots of public presentations. That was a large growth spurt for me, as self-teaching myself to be a public speaker and learning how to engage a group of people also served as the thing that made me want to try stand-up comedy. 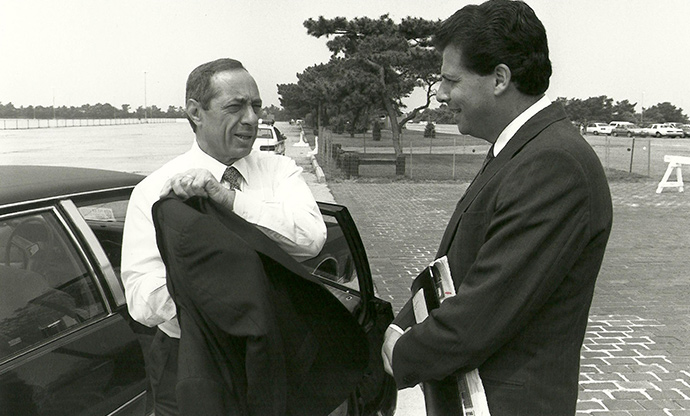 “It comes from what I used to do to try and break the ice. Weaving in a joke to the beginning of a presentation, even a boring one, had people coming up and saying I was a good speaker and a funny guy. And so, through the friend of a friend, a few years later I learned about Stand-Up University comedy classes at the Brokerage in Bellmore, and it showed me the pathway. It was life-changing for me. They prepared me to get ready to be on stage, and my first show was the day before my 60th birthday. I found I had a knack for it.

“I developed material, started doing some open mic nights, and that led to calls to do some paying gigs. I haven’t done much since the COVID period, but before that I would do about a show a month, working as the opening act, doing about 10 minutes of material. This was another plateau where I overcame the challenge. I’ve also worked in the public relations industry, first in ’94 after Cuomo lost, when I started a firm working out of my home that grew into a small business with a brick-and-mortar office, and did that for about 10 years before getting back into government as a deputy supervisor to then-Brookhaven Town Supervisor Brian Foley. I shut down that PR business and worked in government in various positions, town and state, until about eight years ago, when I left government for good and started the PR again. I do that now as a one-man band.”

Everything I do is about connecting with people and engaging people. Maybe that comes from not having the connections I wanted as a kid who stuttered.

“Today I teach college communications classes, including public speaking, introduction to communications, things like that. It wasn’t easy at first, but I use the fact that I stutter and I talk about it. I let them know about the challenges I faced, and that when they have to give a speech in public speaking, I understand that they are reluctant or nervous or self-conscious, because I’ve been there. It’s been a daily challenge; you never turn the switch off.

“If I don’t use all the ways I’ve learned, I could slide right back into disfluency and have trouble communicating. The coping mechanisms are always switched on. There are times when I feel like I’m speaking effortlessly, but believe it or not, it’s often when I’m onstage doing comedy. There are celebrated performers who stutter but rarely do so onstage; it’s something about working off a script or playing a role. You tend to stutter less. Stutterers, when they sing, don’t stutter. 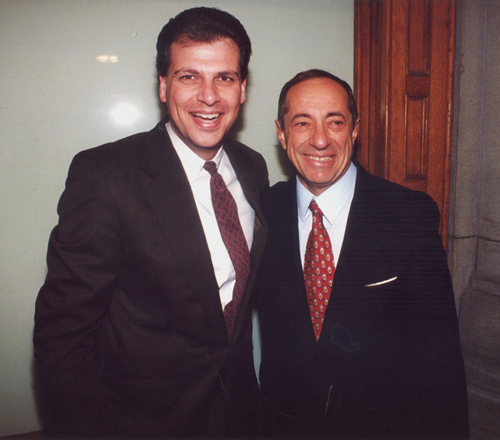 “When you go on to perform, you just enter a different headspace. It becomes effortless at that point. I also have two grown daughters, and with them I’m not so self-conscious. I tend to be more fluent around family. I think the anticipatory anxiety isn’t there, and when I’m with them and I stutter, I’m not so concerned. I know they are not judging me in any way.

“Performing, teaching and family are about making connections. When it comes to my students, I really enjoy engagement with them. When you connect with an audience, after getting those first laughs, you’re developing a relationship. All these things help put my mind at ease. Everything I do is about connecting with people and engaging people. Maybe that comes from not having the connections I wanted as a kid who stuttered.

“I always work in a stuttering joke in the beginning of my act to kind of put the audience on notice that I’m a stutterer, and if I do stutter later, it’s sort of part of the act. It helps me get past it, too. Even today, speaking can still be a struggle. But it’s manageable, and I’m more accepting of my own stuttering. If I have a bad day, I don’t beat myself up over it like I used to. I embrace it more. It doesn’t hold me back.”