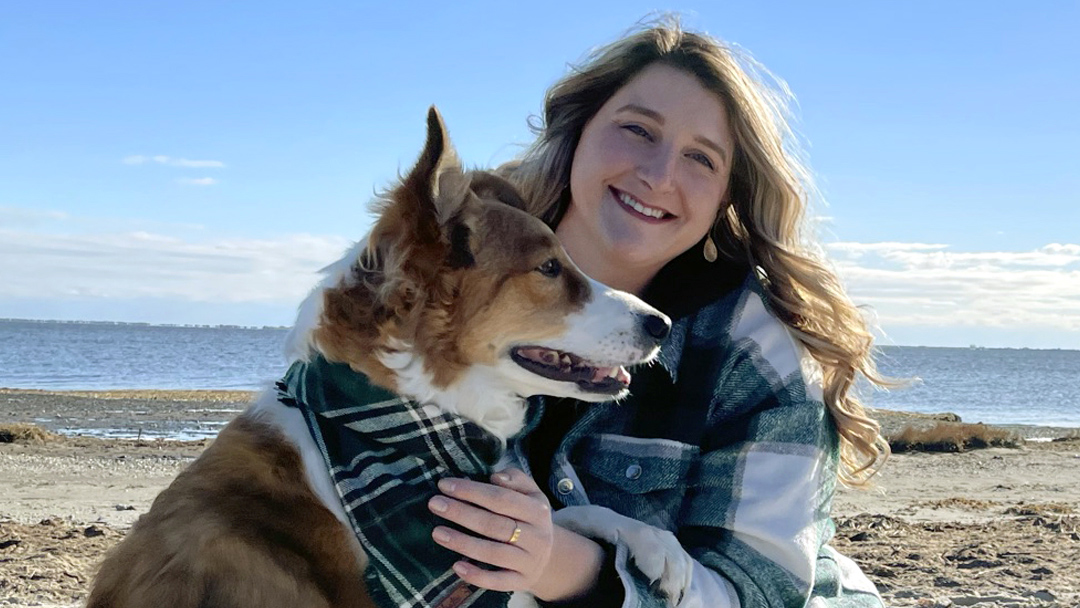 ‘It’s important to acknowledge that animals have a profound impact on the well-being of people. It should be recognized more often.’

“I was working at a vaccine clinic upstate when a woman brought Tucker in and mentioned that he was going to wind up in the shelter that night. She said that she found him 2 miles off of her backyard tied to a tree barking. I immediately knew that he was mine because he literally fell in my lap and gave me his belly. He became my best friend. He has always been so sweet and kind in nature. We started going to dog parks and I found other things to do with him on Long Island, so we grew close. He has always been attached to my hip. He’s a big cuddler!

“Now, Tucker is an emotional support animal. I had diagnosed anxiety, and I didn’t like the medication I was being prescribed. I felt like it would dull my happy even though it tamed my anxiety. My therapist and I felt that Tucker and his presence calmed my anxiety as a whole. My doctor doesn’t really believe in emotional support animals, but my therapist does, and she could see the difference in my body language when I would bring him with me to meetings. She would have me bring him and then sometimes I was told not to bring him. I would glow when I would talk about him. She thought it would be beneficial for me to have him with me at work for when things get stressful. I work at a school, and when I bring him to work he brightens everyone’s day.

He greets everyone as individuals—each person gets a different greeting. Tucker is so receptive of when people are not in a good mood or they’re sad.

“It puts a smile on my face when I’m walking into the school and everybody says Tucker’s name as he rolls over on his belly. He greets everyone as individuals—each person gets a different greeting. Tucker is so receptive of when people are not in a good mood or they’re sad. When students come into the main office seeking medical help or they’re upset and want someone to speak to, Tucker greets them at the door and you just see a sigh of relief come over them.

“To see the true impact that he’s having on a child is so overwhelming to witness. It’s just so warming and beautiful to see how much he affects people on a daily basis, myself included. It’s important to acknowledge that animals have a profound impact on the well-being of people. It should be recognized more often. People are generally happier. I certainly am.”