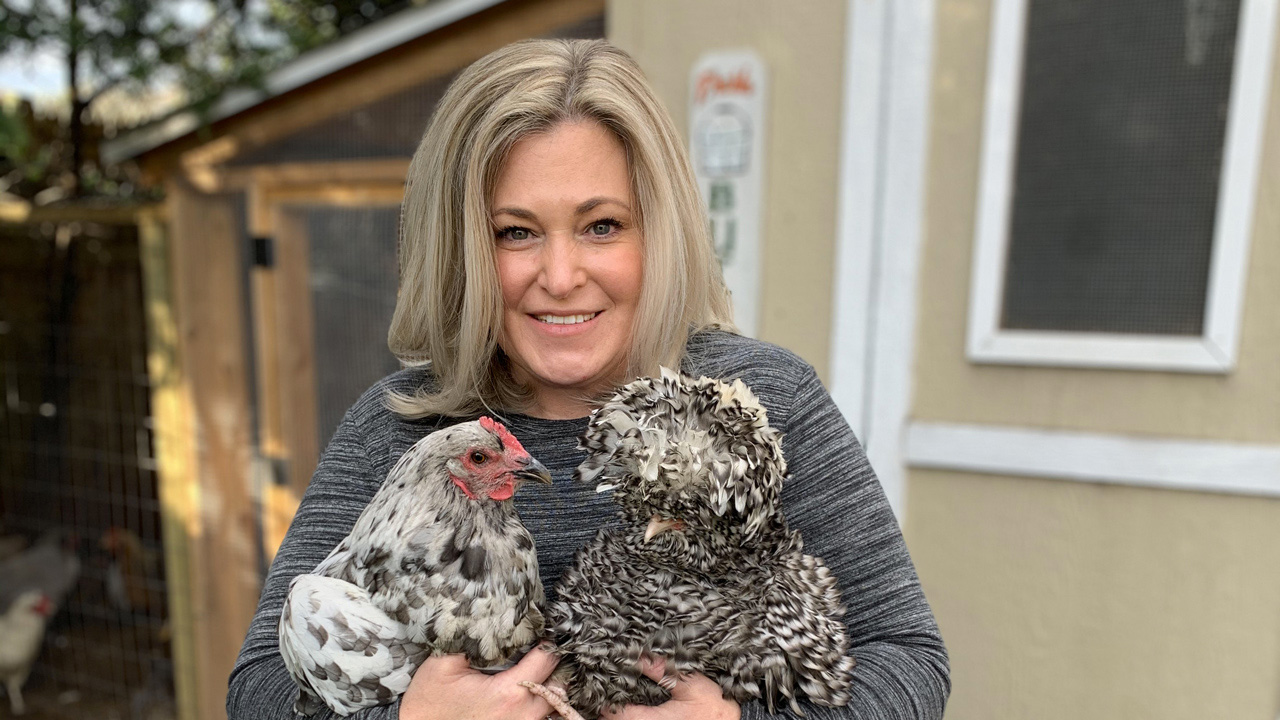 ‘We’ve been doing it a long time, so most people know us. We’ve become the old timers. We started not knowing anything and now everybody comes to us.’

“We went to the Garden of Eve Chickapalooza and that’s how we got our first chickens. You pay $10 for the class and got a free chicken. And then it just kept growing. Two became three within a week. That became six and before you know it, we have about, I don’t know, 70? It’s hard to count now. Sometimes we lose some, sometimes we gain some.

“Our neighbors have chickens and a whole bunch of people in the neighborhood do too. The Long Island Chicken Keepers Group has thousands of members. Everybody’s really tight-knit. They’re also kind of secretive. Most people we know would never admit they have chickens. Keepers get blamed for rodent problems, so most don’t want people to know they have them otherwise you become the neighborhood pariah. You have to keep them clean.

“We’ve always had a lot of animals. It’s good to have animals around with kids too. I think kids with animals are more compassionate. They learn nurturing skills. The kids are always out tending and collecting eggs and feeding them peanut butter and jelly sandwiches. Some of the chickens are more friendly than others. At times, we’ll handle a chicken nonstop and it’s never friendly. Others are super friendly. You get super attached to the friendly ones.

“They can live 10 years. A lot of people will cull them when they stop laying. We don’t do that. We just figure they’ve worked hard for us making eggs, the least they could have is a nice life and hang out in the backyard eating bugs. We don’t eat our chickens. We do eat chicken, just not our chickens. They’re our pets. We’re keeping pets that lay eggs.

When people buy eggs from us, they want to see something unique, not something they can buy from the supermarket.

“Different breeds lay more than others. We have a whole lot of blue and green layers. When people buy eggs from us, they want to see something unique, not something they can buy from the supermarket. The black copper maran lays an egg that’s chocolate colored, we have those too. We use as many as we can and then we sell them to the neighborhood for $5 a dozen. In the spring and summer, we get two or three dozen a day. And we sell them as fast as we collect them.

“We’ve traveled with chickens. We have a house in Florida, and we brought chickens from there. There were breeds we couldn’t get up here. One of them was a rooster, she would just perch on my seat as we were driving on the interstate. The car stunk to holy hell by the time we got back.

“We’ve been doing it a long time, so most people know us. We’ve become the old timers. We started not knowing anything and now everybody comes to us.”