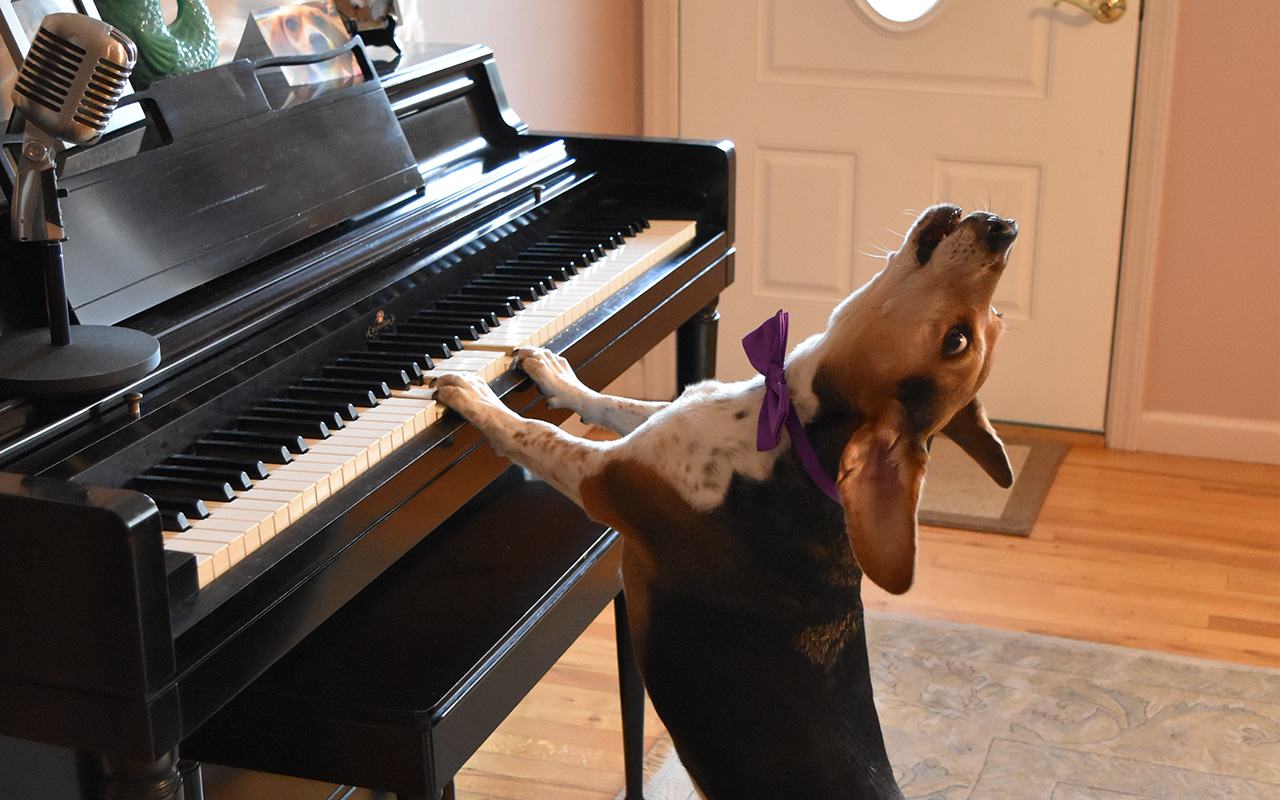 ‘To know he’s changing someone’s life like that has been truly rewarding and fulfilling on so many levels.’

“We rescued him six years ago. We named him Buddy after the movie ‘Elf,’ and then once he started playing piano, we added Mercury. He’s almost 7 years old. I think 7 might be his lucky age. He’s not a regular dog. He plays the piano and sings every day. I played piano when I was young and saw a piano at our neighbor’s curb. We got the piano into the house, and I never got back to it, but Buddy did. He rescued our piano in a way. It was covered in dust up until then.

“Buddy’s fame really took off a few years ago and has been really growing in recent years. There’s a video of him and our little one, Lil Sis, on our YouTube channel that has nearly 20 million views. I think our YouTube blew up because people wanted to see them play and grow up together. She’ll play piano or tambourines and use little guitars, and she loves to sing. They’re so cute together, but they are the typical brother-sister combination where sometimes, you do need to separate them, or they get on each other’s nerves.

“We’ve had people tell us, ‘My mom’s been in the nursing home for 10 years and I haven’t seen her smile until we showed her Buddy’s video.’ To know he’s changing someone’s life like that has been truly rewarding and fulfilling on so many levels. Until he doesn’t want to play, we’ll never stop posting these happy, little, fun videos. It’s all about spreading happiness, spreading joy, and making people smile. There’s such stress and chaos going on in the world.

“Ironically, when we saw him at the adoption event, what Glen loved about him was that he was so quiet. It was only a month or two after we rescued him that he started howling along to a fire siren. We had no idea beagles sing. Different news channels picked him up. Buddy was on ‘Good Morning America’ a few years ago and won Most Tail-ented Award. All this craziness started, and we said we have to do more. We’re going to start getting him out for more meet-and-greets. Maybe he’ll do a tour someday. Now with the weather getting warmer, we’re going to do a Long Island dog meetup. Next month, he’s going to be performing at a library. We’re going to get him back out there. We’re ready. He’s ready.”

He just wants to play the piano and he’s happy. His tail is always wagging.

“Buddy was a rescue. He was a stray in North Carolina when a rescue picked him up before coming to New York. Rescues are just so special. We want to keep sharing with the world to rescue and adopt. Buddy has an online store and we make a monthly donation with the percentage of the sales. We donate to animal shelters and rescues. We created a calendar where we ask our fans who would like to be in our calendar. We pick 12 animals to feature. Whichever rescue they were rescued from, in that month, we make a donation to that shelter or that rescue. Shelters are overrun with animals, so anything we can do to save another life is rewarding. It’s about community. We think he’s proud of his mission. Unfortunately, he’s going blind now. He was recently diagnosed with an eye disease called PRA. It kind of took us a while to talk about it without getting really upset. As humans, we rely so much on our vision, but dogs really don’t. For them, it’s all about the scents and the feel and the hearing. He’s doing really well with the transition. He’s almost completely blind now, but he has a little bit of vision. He probably can see shadows still out of his right eye, but the left eye progressed pretty rapidly. He does see an eye specialist, and so right now, that is a challenge for us just acclimating him to the transition, but he’s doing so well.

“He just wants to play the piano, and he’s happy. His tail is always wagging. We don’t know what this challenge may present with getting him out to performances, but so far, he’s doing so well, thankfully. The good news is he’s still going to live a long, happy, healthy life. I just love everything about this little guy. He’s so funny. He keeps us laughing. At the end of the day, he just wants to snuggle with me on the couch. He’s loving and he’s easygoing. If we could, if we had the room, we would adopt 100 more beagles. Animals ground you and bring happiness and joy. I grew up with dogs and at a young age, I was always exposed to dogs, but Buddy’s been our first dog together, as a family, and it’s just that much more special.”

He gave us a way to really help people, a bigger purpose.

“He’s just so loving. He has a heart of gold. He’s actually my first dog. I started training him. I got him to sit, roll over, give me the paw and beg. I thought, ‘Wouldn’t it be funny if he could play the piano?’ I got him up there and hit some keys, and before I knew it, he started doing it on his own. This was in 2016. He would start choosing to do it himself, which is crazy. I was in the other room when he did it for the first time by himself. The first time I saw him playing, my jaw hit the floor. I couldn’t even believe it. I felt like I was dreaming. I think that’s a lot of people’s first reactions. I dove for my phone to catch it on video because I thought nobody would believe this. Some people online accuse him of being fake, of being CGI. I think of it as a compliment really. 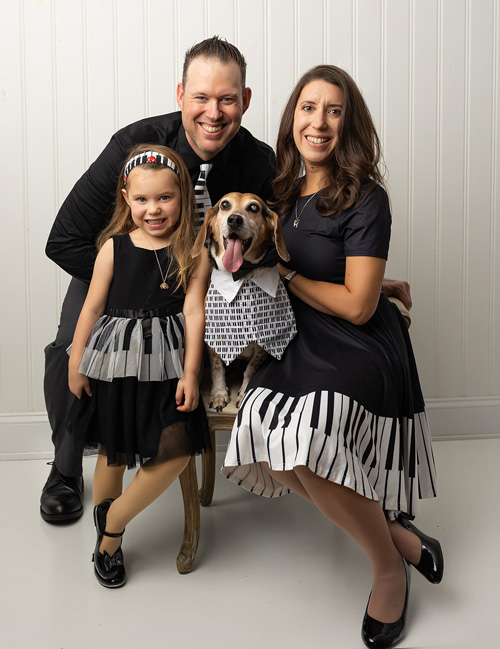 “I’m a drummer. He sometimes sings when I’m playing because my drum set is downstairs, so he’ll sing along. In a recent video, I actually did play along with a piano player and Buddy, so it was all three of us playing together. The first time we heard him howling along to a fire siren, we were laughing. It was hysterical. Every day he does something different. He’s like a person, almost, that just can’t speak, but he does speak with the piano.

“I think he likes to create great music, but he also does get a tasty reward. Before the pandemic, I took him to training to be a therapy dog. Now, we’re focusing on his eye diagnosis and that transition. I just hope he leaves a legacy of happiness. I want people, if they’re feeling down, to always be able to go to his YouTube channel and he’ll brighten them up. He gave us a way to really help people, a bigger purpose.”