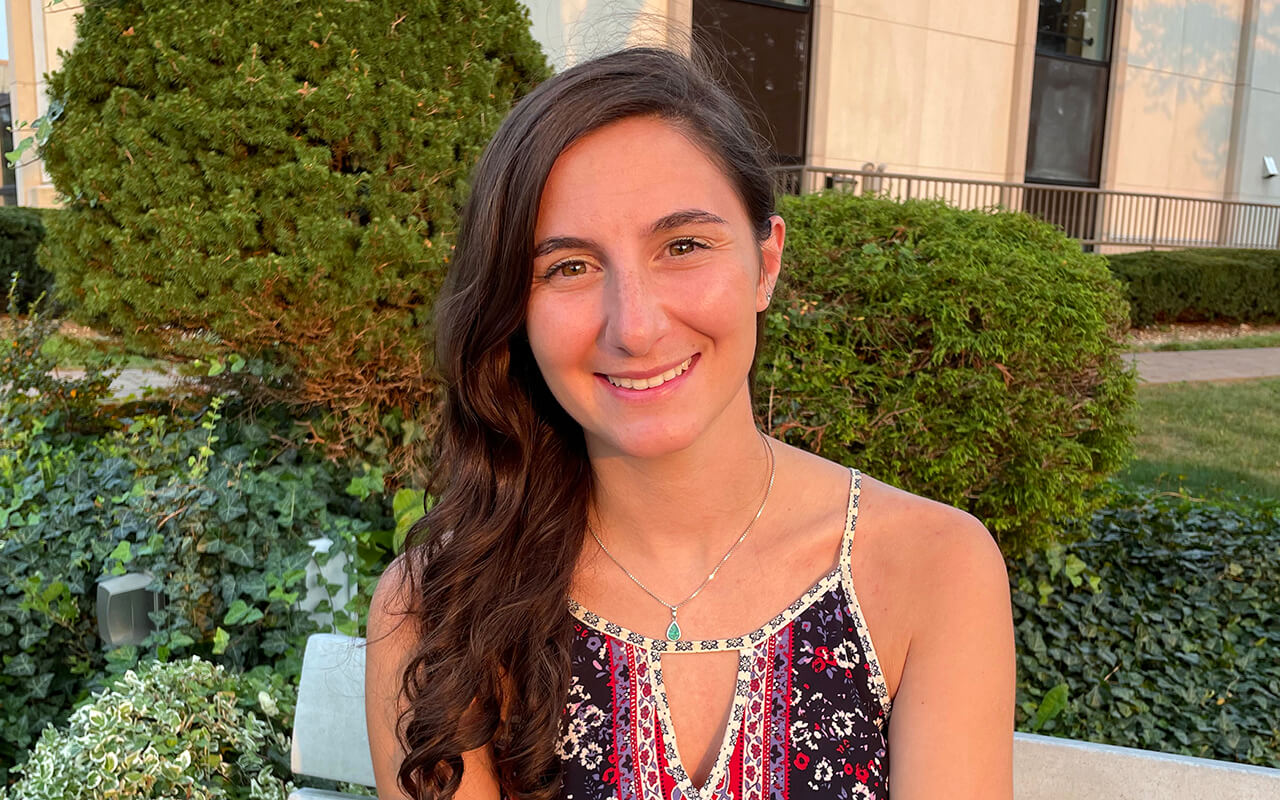 ‘I always wondered if I went back to my emergency room that first time and they believed me, could things have been different?’

“I had a crazy health scare during my sophomore year of college. I was a healthy student and soccer player. I was walking to class and had a headache like I’ve never had before. I remember feeling just very out of it, but I went to class anyway. I was a neuroscience major, so getting crazy headaches is something I knew was not right. I went to the emergency room, and they said it was just a migraine. I went back to my room and tried to recover for a bit, but the pain got worse. 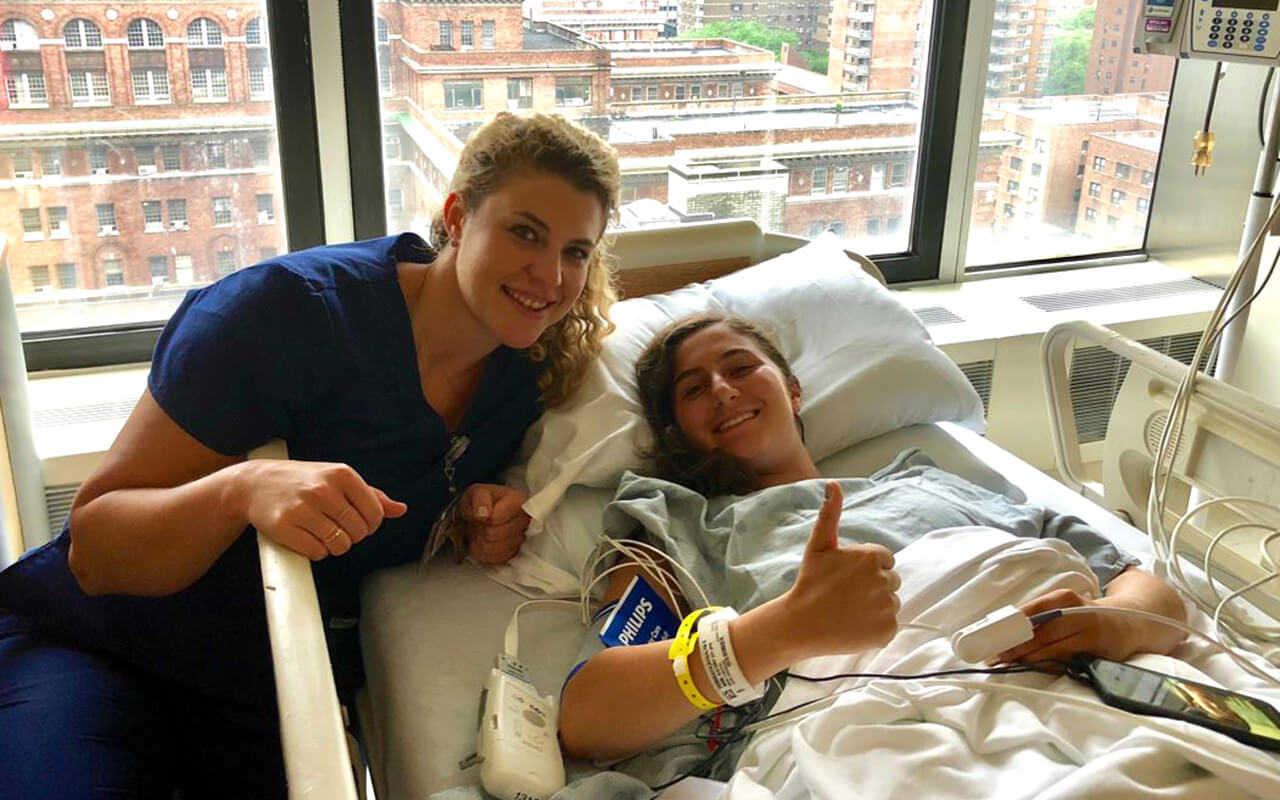 “I went back to the ER that night and again, they said, ‘It’s just a migraine. You’re a college student, so maybe you’re stressed or drinking too much.’ As a science major, pre-med and student-athlete, I thought how crazy it was that they would say this, but I had no reason to question it. I tried to study and be a student again, but I was in the most unbearable pain. When a doctor tells you twice that you’re okay, then you start to wonder if you’re exaggerating like they said. I felt very foolish. 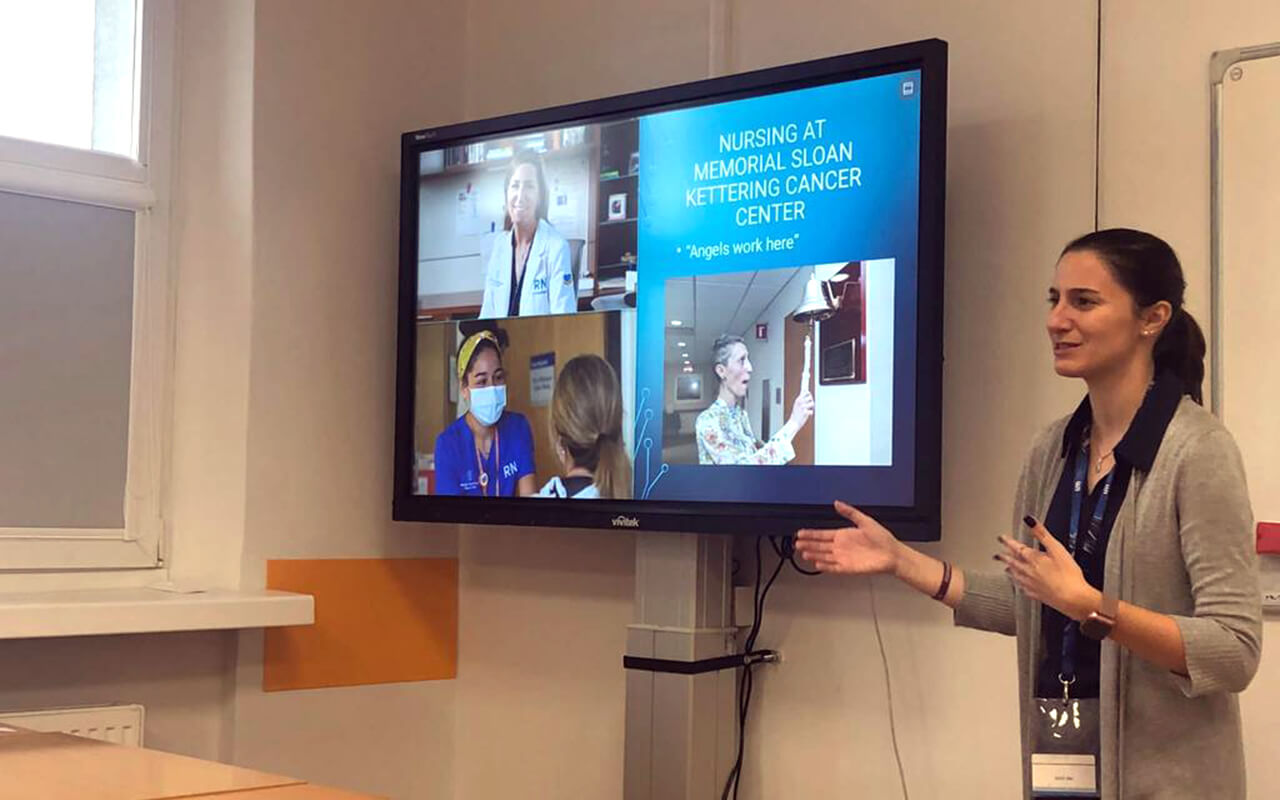 “About a week later, I woke up in the middle of the night screaming in pain. I went back to the ER and finally got a scan, after asking for one in the past two visits. They found a massive blood clot in the veins of my brain called CVST. They rushed me to the stroke center, and I got treatment with blood thinners and pain medications. They think this type of clotting could have been from my hormonal birth control medication. You know all the scary things on the bottle of your medication? For me, I was the one in a million it happened to. That’s why I’m a big advocate for women’s health and being that self-advocate for yourself. I always wondered if I went back to my ER that first time and they believed me, could things have been different? That initial headache I had was called a “Thunderclap” headache. It’s your baseline headache multiplied by 50, so you would know if you’re having one. It’s the worst pain you’ve ever felt – your eyes are blurred, and you’re disoriented. I was 19 at the time and in and out of the hospital. I learned a lot about patient care and what it meant to be on the other side and how sometimes, young women aren’t taken seriously.”

“I was trying to manage the clot while still in school with a full academic load. About six months later, I started getting this pulsating sound in my ear. I went back to the doctor and got a scan and they found something called a dural arteriovenous fistula (DAVF). It’s a very rare complication that can cause balance and coordination issues, abnormal blood flow, which is what I was hearing, and the very worst cases it can cause are bleeding, massive stroke and injury. When they caught mine, I was very lucky that it wasn’t bigger than it was. It’s very rare in someone my age. I ended up coming back to New York. My cousin worked at NYU and referred me to a surgeon there and it was nice being so close to home.

“Coming back home really did help. I think I underestimated how important it was to be around family and my lifelong friends, especially when they were at the hospital to support me. The family I have on Long Island really coasted me through. They were instrumental in my recovery. I had to have a cerebral endovascular embolization that involves surgically gluing abnormal blood vessels shut. It’s terrifying, but also amazing that they can do that. Afterwards, I still heard the pulsating sound and had excruciating pain so about two months later, I had another angiogram scan to see if my DAVFs had grown. That day started off as just getting an angiogram scan, but I had to be asleep for it because they weren’t sure if I would have to get the procedure or not. Not knowing was the most nerve-wracking part. I had to get a second cerebral embolization and according to my surgeons, if they didn’t intervene when they did, the vessels could have grown to a dangerous point. They were both considered minimally invasive brain surgeries, but there’s nothing minimally invasive about anyone poking around in your brain.

It’s so ironic that I was studying neuroscience and this happened to me. I think when you know too much about something, you lose sight of it happening to you. I was aware of the clinical science symptoms, but it was definitely jaw-dropping to think, ‘This is me.’ It wasn’t just a case study I was reading.

“Somehow, I finished college on time. My professors were so helpful. It was a crazy two years of unknowns and procedures. I had to self-inject blood thinners and get my blood tested every two days while in school. The nursing staff knew me so well. It’s ironic that I was studying neuroscience and this happened to me. I think when you know too much about something, you lose sight of it happening to you. I was aware of the clinical science symptoms, but it was definitely jaw-dropping to think, ‘This is me.’ It wasn’t just a case study I was reading. I’m extremely lucky.

“I see a neurologist regularly and pain management is something I still deal with, but nothing that’s stopped me from doing everything that I’ve wanted to do. I still have throbbing in the area and sometimes I get blurry vision. My nerves on the left side of my head became so sensitive after surgery that it’s super painful to brush or touch the left side of my head, which is why I usually always style my hair to the right. Other than that, I’m very thankful to be here.

“Even with every hiccup in the road, I was very blessed with the best doctors and team. I think for this type of thing, recovery is ongoing. Becoming aware of limitations is very important. I’m very active and I love to be involved but being able to take a step back and worry about one thing at a time was a learning lesson during recovery. Counseling was also important. I went to talk to somebody because mental health is a big part of any recovery. I played soccer in high school and college and it was kind of a coping mechanism for me in the middle of all this. Whether or not I was supposed to be playing was a different story, but it was always my safe space. A clinician that I worked with helped me through it and he said, ‘It’s not going to be easy, but we’ll get you back to it.’ Being able to play soccer was a goal of mine and I was able to play a bit my senior year; I had to wear a helmet guard for safety. When you go through something like this, it’s really important to take an optimistic approach. It’s easy to get very down and question, ‘Why me?’ On the very bright side, I’m healthy, I’m active and I’m still a soccer player.”

It opened my eyes to the importance of having compassionate and empathetic clinicians on my side because in some of the hospitals that I was in, I had the opposite of that.

“After I recovered, I became even more excited about the neuroscience because I understood the value of it. Going through it was challenging, but it’s helped me be more empathetic and become a doctor who wants to be there not just to help the physical, but also the mental and social. Seeing where that combines – that balance of body and brain – that’s what neuroscience is to me. It opened my eyes to the importance of having compassionate and empathetic clinicians on my side because in some of the hospitals that I was in, I had the opposite of that. I’m also very involved in a lot of recovery and advocacy groups for young people who are dealing with stroke and brain injury.

“I’m volunteering with an organization called SameYou and their goal is to improve rehab all over the world. I think it’s a really great opportunity for me to learn and to try and give back. Unlike different types of ailments out there, there’s not a lot that we know about brain injury. There are people who have severe injuries that alter their personality, their ability to walk and talk and be who they are. They need rehab options and I’m very passionate about finding new ways to help support people who need that kind of recovery.

“I just got into medical school and my spot is being held so I can do a 10-month fellowship in Poland to teach upper-level English to medical students. I studied European healthcare abroad in Denmark the year after all of my medical issues happened. I traveled with my class to medical centers in Berlin, Germany and Poznan, Poland. That was one of the things that got me most excited about coming back to Poland. I’m drawn to global health and I want to help communities that don’t have access to it. Through my experiences traveling and studying, I see myself trying to be an advocate for underfunded populations in brain injury and brain health. I would like to balance the public health side with the clinical side and find ways to support people who need it and may not get access to it. I think the key to understanding health and equity is to study and be open minded. Once I recovered, I got to go abroad for six months to Copenhagen and now, I’m about to start this fellowship and study public health even more. It’s important to put yourself out there and try and learn as much as you can and go where it’s needed. I’m not a clinician so I can’t do clinical things yet, but what I can do is teach and continue to learn.”